This week sees the long-awaited release of mythical and legendary Savory jazz recordings that had been rotting away in an Illinois basement for the better part of 50 years. Andy Royston tells the story…

The story of the Savory Recordings begins and ends with the same man, Loren Schoenberg, now the director of the National Jazz Museum in Harlem.

Back in the 1980s Schoenberg played tenor sax, and in his 20s had already played professionally with alumni of the Count Basie and Duke Ellington bands. He formed his own band which in time became the final Benny Goodman Orchestra in 1985. He soon became Goodman’s personal and business manager.

It was during his time with Goodman, then in his 70s, that Schoenberg learned of a series of secret radio recordings made in the late 1930s by a brilliant young audio engineer named Bill Savory. Goodman had used some of Savory’s recordings for a 1952 record release The Famous 1938 Carnegie Hall Jazz Concert. 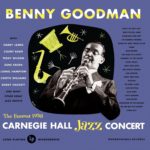 Carnegie Hall Jazz Concert has been described as the single most important jazz or popular music concert in history; “jazz’s coming out”.

It was important for two reasons. The first, it was Benny Goodman’s debut release in the brand new long-playing format and his first million seller. The second was its sonic detail, considered way in advance of the usual records of the era. The story of how this concert, and it turns out many others, were recorded with such fidelity goes back to Bill Savory in his New York studio.

Savory  in 1935, was working for a  ‘transcription service’ — these were the days before audiotape — to record ‘airchecks’, live radio shows onto acetate or aluminum discs. Usual practice was to use the standard 78rpm format which only had about three minutes of recording time. Savory, it turns out was privately recording on to  bigger aluminum or acetate discs, and at slower speeds (33 1/3 wasn’t officially invented until after WWII by a team that included Mr. Savory). And unlike most other radio transcriptions these were done in a professional recording studio on state-of-the-art equipment.

This allowed the capture of performances of longer versions of rehearsed material, improvisation, and sessions that were otherwise broadcast to live audiences and lost forever.

After Savory’s death in 1984, Schoenberg found himself in the midwest running a jazz workshop and got in touch with Savory’s son. Soon enough he was driving out into the Illinois countryside to meet with SAvory’s heirs, only to find hundreds of hours of vintage recordings just rotting away in moldy old boxes.

According to NPR Schoenberg bought the collection for the National Jazz Museum in Harlem for an undisclosed sum, driving the boxes back to New York in a rented truck.

“This is a whole new forest and it’s got these trees that have been growing for 70 years. And we’re finally ready to see what kind of fruit they bear.”
Phil Schaap, curator of jazz at Lincoln Center.

Fruit From The Tree

The museum then started the daunting task of talking with record labels, artists and publishers to acquire the rights to distribute the music in the Savory collection. There would be a myriad copyright owners within a single – the writer of the music and lyrics, the arranger, publisher, performers and the broadcaster – frequently names like ABC and CBS. As Savory’s recordings were created outside the scope of the contracts he didn’t record the name of each performer, nor have a written agreement himself with any party involved – which might explain why these recordings remained a secret for half a century.

So what gems has Schoenberg uncovered? What fruits have fallen from the tree?

The Savory collection features hundreds of live performances of jazz legends at the heights of their careers. Ella Fitzgerald, Teddy Wilson and Duke Ellington; Benny Goodman, Cab Calloway and Fats Waller. A 1939 recording of Billie Holiday singing Strange Fruit with only a piano accompaniment. Coleman Hawkins in a New York nightclub in 1939 playing his classic ‘Baby and Soul’ which is twice the length of the original 78 RPM single beloved by jazz fans.

“It’s remarkable, this recording. It’s not just nice. It’s not just helpful to the historical record. It might be better than the one we feel obligated to compare it with.” Ben Ratliff, New York Times, on the Savory version of Body and Soul. 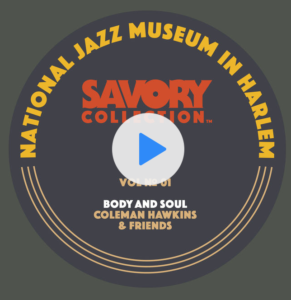 “The Savory Collection, Volume 1 features that longer recording of Body and Soul: and also features Hawkins and his band playing “Basin Street Blues” and “Lazy Butterfly” from the same date in 1940.

The recordings are an exclusive release in partnership with Apple Music and iTunes. This first release comprises 18 digitally restored tracks recorded between 1936-1940 and showcases swing era icons Ella Fitzgerald, an extended Fats Waller set and some exquisite Lionel Hampton jams.

Music fans curious about the way that the swing era gave way to early be-bop styles will love these extended recordings. The Body and Soul take is at least as essential listening as the original, which now – in comparison – ends way too quickly.

These records, by the top stars of the era, are easy, relaxed, and full of invention.

I guess we’ll be forever in debt to The National Jazz Museum in Harlem for diligently restoring these recordings and clearing copyright. And hats off to Savory’s son Eugene Desavouret who saved this unique archive of 975 discs and hundreds of hours of music from the dumpster.

I guess the next question is, what will be in Volume Two!!