She Captains by Joan Druett

Home » All books » She Captains by Joan Druett

She Captains: Heroines of the Sea. 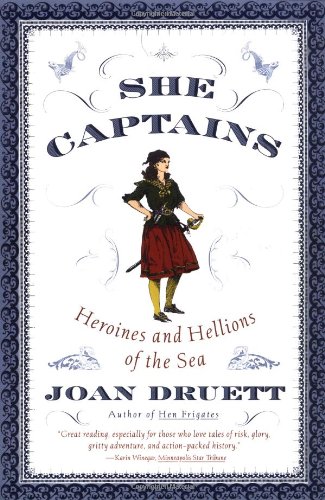 Prize winning historian and author Joan Druett has created a fabulous book which is chock-full of fascinating about women at sea throughout history.

Seafaring was a dangerous business in times gone by and yet many women were attracted to life aboard. Some were captains – and even pirates – in their own right.Others went to sea with their husbands. All their stories are fascinating.

Strictly speaking, in the heyday of naval wooden sailing ships, women were not allowed to accompany their husbands but the authorities turned  blind eye. And it wasn’t just the captains who took their wives on their adventures, lower officers did too so many ships had  contingent of highly respectable married women on board.

But not all women were ‘respectable’. Many captains, Lord Horatio Nelson for example (before he was captivated by Lady Hamilton) would take what we might charitably call their ‘mistresses’ – more likely to be prostitutes.

During battles at sea,the women could be invaluable. Some would take part in the fighting themselves, others would tend to the wounded, tear up their petticoats to make bandages or taking badly needed sustenance to the men manning the cannons and guns.

But even during peaceable times, these women faced the hazards of the ocean and weather. They tolerated primitive, insanitary conditions, injury and disease. It wasn’t uncommon for babies to be born on board. Can you imagine giving birth under those conditions?

Sometimes, the conditions were surprisingly genteel. Take for example Margaret Penny, the wife of the Scottish captain of a whaling ship. In the nineteenth century, whaling was big business and to make it profitable, ships would overwinter in good whaling areas, such as the Arctic. In the 1894-95 winter, Margaret  found herself presiding over a strange community in Pauline Cove at Herschel Island.

Her husband had pioneered the method of roofing over the ships to make them habitable in the harsh winter conditions.  There might at any time be a dozen ships, roofed over, banked with snow and huddled together and seeing out the winter.

The presence of the women led to curiously formal society. Margaret would preside over balls, concerts and parties. Dinners were held aboard the cosy ships and menu details survive – such as ‘lobster salad and olives, oyster paté with French peas’, ‘Barlett pears with citron and sponge cake’.

At the other end of the scale there were female seafaring warriors, outlaws and pirates. There were women who owned – or partially owned – ships, those who went on early voyages of exploration, those who were shipwrecked and more. This book is a fascinating and comprehensive look at virtually unknown societies in times gone by.