The story behind the ‘I love you’ bridge.

In 2001 local residents in the Park Hill area of Sheffield saw a rather amazing piece of graffiti. It wasn’t just that it was an ‘aww’ moment, it was also remarkable because of its location. It was written on the side of a walkway bridge one hundred and thirty feet off the ground.

It read ‘Clare Middleton I Love You Will U Marry Me’.

Everyone who saw it was astonished at the thought of anyone being brave enough to write the message from the bridge that connected two tower blocks of residential flats. Although the bridge was used by pedestrians, how did the person manage to hang over the dangerous bridge?

The flats were very run down at the time and when the caretaker of the building saw it he immediately thought that it would be impossible to remove. Whether anyone tried is unclear but the fact is that the graffiti was never cleaned from the bridge and it became almost a local landmark.

In time, the tower blocks were renovated and what were once apartments for the lower-paid became luxurious and modernised. But still the graffiti remains. And for many years, so did the speculation.

No one knew. There were various stories that circulation, most of them pretty wild speculations. But it wasn’t until ten years later that the truth emerged.

The graffiti became an icon

The developers of the refurbished buildings decided that the graffiti message would become part of their brand. They illuminated the now-famous words with neon. (They omitted Clare’s name). It was reproduced on t-shirts, cushions, billboards and there was even an ‘I love you will u marry me’ beer produced by a local brewery with the slogan on the bottle’s label. 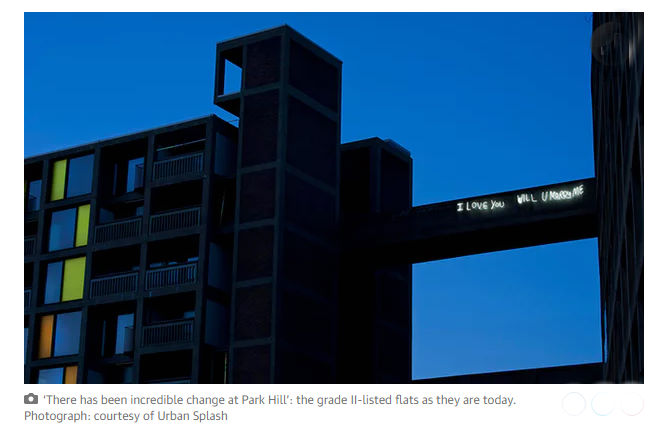 Screenshot from The Guardian

Not a happy ending

In 2011 the man who created the graffiti turned up. His name was Jason and yes, he had been in love with Clare and had wanted to marry her. Although he suffered from vertigo, his 6’6″ height meant that he could lean over the parapet of the walkway and spray paint his message.

At a height of over 130 ft above the ground, it could be seen from the local cinema where he took Clare and pointed out his message to her. She accepted his proposal. But both Jason and Clare were troubled people with unsettled histories.

Clare had children from previous relationships and was under the care of social services. She also had a drug habit. Jason had been brought up in a series of children’s homes where he had been abused. The social services warned Clare that Jason would not be the right person for her.

She was told that she should forget him and concentrate on the well-being of her children. What sort of father would he be to them, they asked, in view of his own upbringing? So some months after the romantic and highly public proposal they split up.

She married someone else and died of cancer when she was just thirty years old. Today her sister says that she wishes that the graffiti had been removed rather than illuminated – it is a constant reminder that she lost her elder sister at such a young age.

Jason, on the other hand, would have liked to have seen Clare’s name illuminated as well because without it the message is just impersonal and means nothing. He said ““You can’t leave one off without another, it was written as one purpose. If they’re gonna keep it, they’ve gotta keep all of it. This wasn’t to anybody this was wrote specifically for Clare.”

The commercialisation of a declaration of love and its sad ending 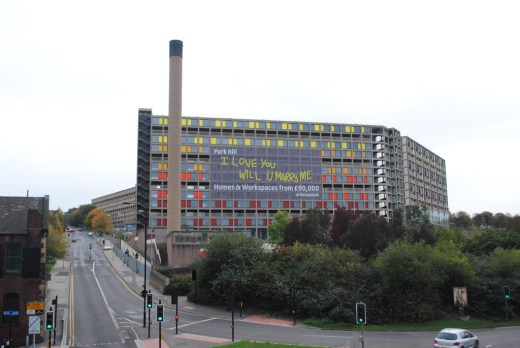 Even if Clare had not died so very young, the sight of the graffiti would still be a sad one because the couple didn’t marry; they didn’t live happily ever after. Indeed, their lives were rather sordid, involving drug usage and child abuse. Yet now that message written by Jason has become a symbol of love and freedom – not to mention a free slogan and tag line for a property development company.

This story, which broke in 2011, has become legendary.

But is the story true?

There are some people in Sheffield who claim that I Love You Will U Marry Me part of the message has actually been there since the mid 1970s and that Jason simply added her name in front of the message. And that it was actually written by a woman, not a man.

Even the Sheffield Star, the local paper, said that Clare’s name had been added at a later date. Jason explained that by saying that he realised that he’d written her name too high so began to lean further over the parapet after he’d written the first part. He also said that the discrepancy in the colours are due to the fact that he shook the can of spray paint so that the last part of the message look stronger and brighter. 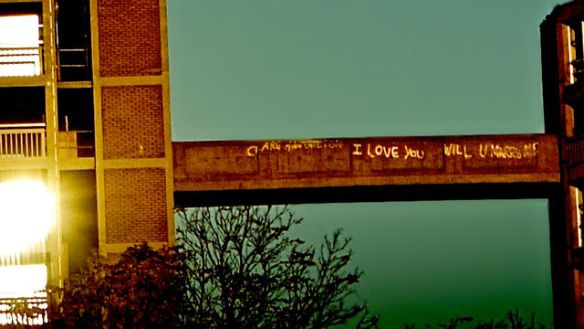 On August 21st, 2016, the Guardian revisited the story which included an interview with Jason. His story also doesn’t have a happy ending. He lost custody of his children when they were young and recently heard that his son had been imprisoned for murder. Jason lost his job and was in danger of losing his home. He couldn’t find work because of a conviction.

He said that he was delighted that the message he had written had been used on t-shirts and other goods. But he was penniless. In view of the fact that the property company had capitalised on his message, he contacted them in 2014 to see if they would let him have one of the newly refurbished apartments. They did not reply.

So what is the truth?

Did the property company callously help themselves to a genuine declaration of love to use for their own commercial gain? Or did Jason appear on the scene to capitalise on the new-found fame of his message?