Before I start I would like to apologise in advance to my Russian friends who might be expecting Muslim Magomayev’s Greatest City on Earth, or a blast of Moya Moskva. And forgive my occasional inclusion of more general Russian songs too.

I’m also writing this from a peculiarly British perspective, as most of my impressions of the city filtered through Hollywood movies, Peter and the Wolf the occasional bottle of Stolly. Assumptions from England tend to be a little contradictory; a mix of Romanov opulence and stark constructivist practicality. 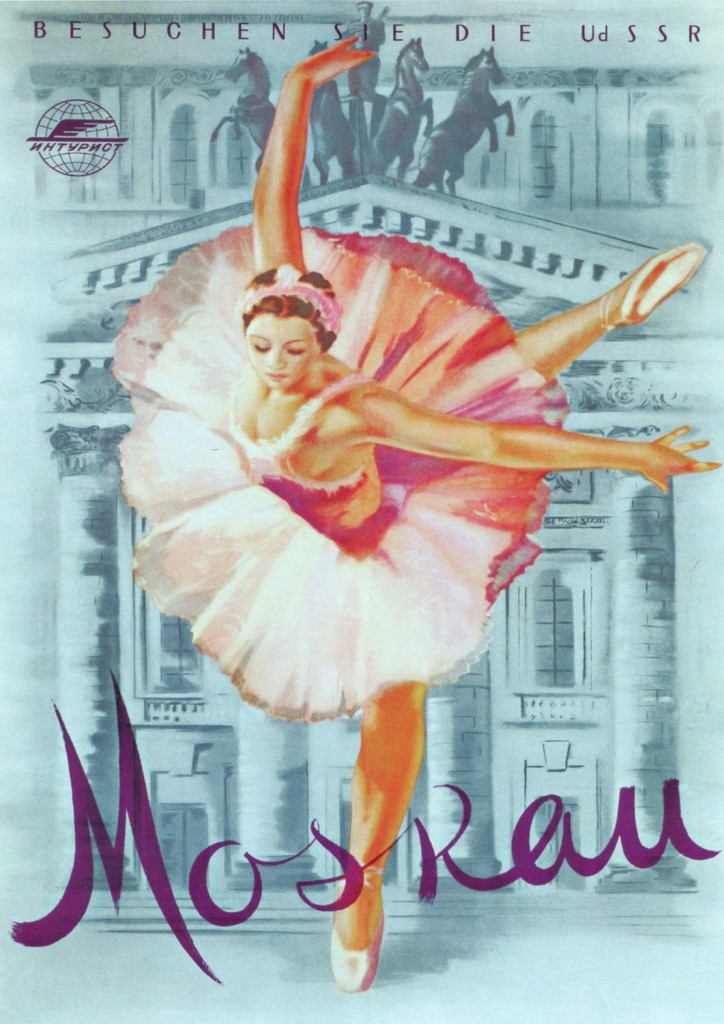 Cold War propaganda barely touched our appreciation of the real Russia, the one that was modernized by Peter the Great after his famous grand tour of Europe (in disguise – he was nearly 7ft tall I’m not sure that he got away with that one) and ended with the opulence of The Hermitage and The Winter Palace. Greta Garbo’s Anna Karenina and her love for Count Vronsky was far more interesting than Vladimir Ilyich Ulyanov and his Red October cronies.

Moscow in music resounded through the halls of the Moscow Conservatory and the suites of Mussorgsky, Tchaikovsky and Prokofiev. The adventures of Sergei Diaghilev, Stravinsky Nijinsky and the Ballet Russes were legend, particularly for students of art and Paris.

Little girls put on tutus, danced to Swan Lake and fell in love with little Olga Korbut in the 1972 Olympic Games. Little boys attempted Cossack dances, were entranced by sputnik and imagined searching for Siberian tigers. 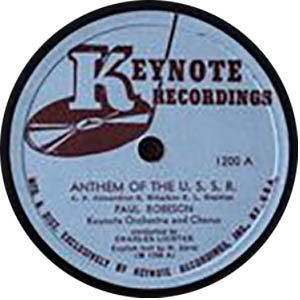 I begin with this song by way of introduction to the extraordinary cultural wall that existed for most of the 20th Century. Paul Robeson, the American actor, singer and activist, stepped right into the spotlight with a English language version of the Russian National Anthem, starting a process of friendship that took years to fulfill.

Robeson’s  love of the Russian people stemmed from his visit in 1934. As he told the press at the time “Here, I am not a Negro but a human being for the first time in my life … I walk in full human dignity”.

Robeson always talked up the similarities he found between blacks all over the world and the Russian people, urging African Americans to look towards the Soviet Union for inspiration. This of course got him into serious problems back home in America. Listening to the serious tones of the news Americans were told to be suspicious and vigilant of any kind of Communist subversion. 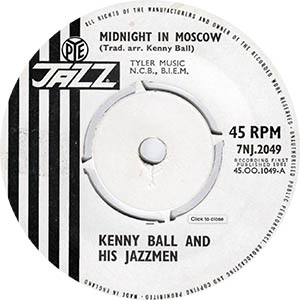 Kenny Ball and his Jazzmen – Midnight In Moscow

The first thaw in the cold war freeze came to light at Moscow’s International Youth Festival in 1957.

Moscow Nights was written by poet Mikhail Matusovsky it was originally called Leningradskie Vechera until the Soviet Ministry of Culture came across it and had it re-written. It was soon a worldwide hit, with versions in all sorts of places.

It became a big hit in the west thanks to Kenny Ball and his Jazzmen, a dixieland style act based in England. It was his biggest hit internationally and sold millions. 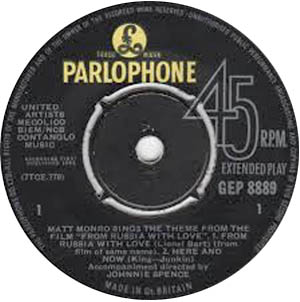 After years of creating Russian villains Hollywood too began to thaw. Films like the Walk A Crooked Mile, Manchurian Candidate, and Dr. Strangelove saw things in black and white, but with the advent of color Russia began to make us blush.

First there was From Russia With Love, with its slink title sequence and its sexy young spy. James Bond is sent to assist in the defection of Soviet consulate clerk Tatiana Romanova, played by Daniella Bianchi. Before I knew which way was up I was hopeless in love with her – possibly the first adult woman I had a crush on. Her mission? To seduce Bond then flee to the West on the Orient Express. “Oh James, James… Will you make love to me all the time in England?…” “Day and night.” 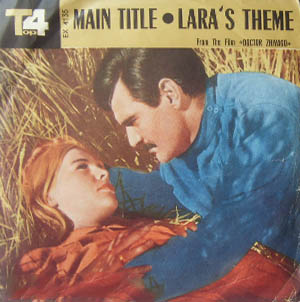 If James Bond had been compromised by a Russian blonde, then with Pasternak’s Yuri Zhivago the passion took on epic proportions. “They loved each other, not driven by necessity, by the “blaze of passion”.

The impact of David Lean’s movie on 60s style was huge. Not only did the film make a star of Julie Christie, her romantic wardrobe of fur coats, hats, white shirts and ribbon bow-tied hair styles was instantly popular. Christian Dior and Yves Saint Laurent, were among the first designers to be influenced by the film’s style. Loose became the thing – the coats and sweaters worn by Julie Christie were a size too big, and the maxi coat became a fashion must-have almost overnight. Swirling snow and Maurice Jarre’s theme were the finishing touches and made the film a memorable romantic experience. 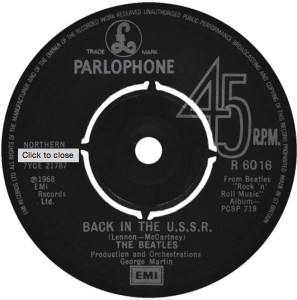 The Beatles – Back In The USSR

The song that really broke the ice, escpecially back in Moscow, was actually written as a parody.

The Beatles were already captivating teens behind the Iron Curtain, in spite of Nikita Khrushchev declaring the electric guitar an “enemy of the people”. The Beatles may have been banned as subversive in the U.S.S.R, not recieving an official release there until 1986, but The Fab Four rocked the black market.

Back In The USSR was a witty parody of Chuck Berry, The Beach Boys and the idealized fantasy of American life. The ironic reference to Georgia, where the name of the Soviet republic mirrors its American twin, confronts our cold war understanding. What do we really know about life behind the iron curtain.

The reference to Moscow girls, who make McCartney “sing and shout” meant something quite different over in the eastern bloc.

“I liked the idea of Georgia girls and talking about places like the Ukraine as if they were California, you know? It was also hands across the water, which I’m still conscious of. ‘Cause they like us out there, even though the bosses in the Kremlin may not. The kids do. And to me is very important for the future of the race” Paul McCartney, Playboy 1984. 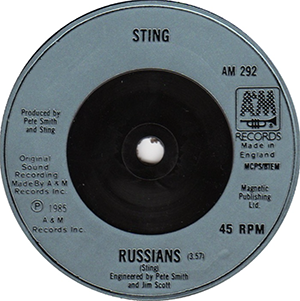 The British had a curiously chilly vision of the Cold War in their heads, thanks in part to the Orwellian nightmare scenarios of 1984 and Animal Farm, and made-for-TV nuclear dramas. Sting’s “Russians” video is steeped in cellulloid austerity with its strong film noir shadows and filmic nods to Eisenstein. The music builds from a melody closely connected to Sergei Prokofiev’s Romance theme

The song came out during the early stages of Mikhail Gorbachev’s perestroika reforms; as Russians protested, the Soviet Union crumbled. The song aims to humanize America’s adversary at at time of considerable antagonism politically.

“We share the same biology,
regardless of ideology.
Believe me when I say to you
I hope the Russians love their chidren too” 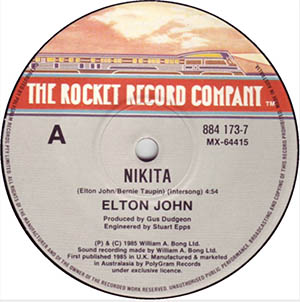 Elton John had been one of the first Western superstars to tour the Soviet Union, and like Paul Robeson all those years ago had experienced the warmth and hospitality of ordinary Russians. Nikita is still widely seen as a love song to a Russian girl (as shown in the video), yet Nikita is a male Russian name.

While Sting’s song is addressing the American cold warriors, Elton is addressing an unattainable Russian. The wider meaning at the heart of his song is striking.

The “never know” sentiment endures to this day, ironically, because of a continuing Russian hostility to homosexuality. The barriers may be down, and the walls may have gone but the object of Elton’s yearning forty years ago is still well beyond reach.

Where were we? Oh yes. Moscow. 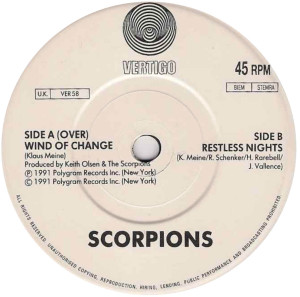 The Scorpions – Wind of Change

Winds of Change is a rock ballad locked into popular culture, inseperable from the collapse of the Communist bloc.

Klaus Meine said he wrote Wind of Change inspired by the changes he sensed while visiting Moscow. These changes set in motion the democratic forces that led to the Soviet Union’s demise, and Scorpions were perfectly placed to capture, as he sings, “the magic of the moment”.

The video at key points mixes flickering lights from a vast crowd as a spotlight swings. Is this a follow spot or a searchlight. The small light in a crowd captures what writer Joshua Clover called the exaggerated grandiose – “like you are at once bigger than God, a tiny Zippo flame in a world of fire.”

The impact of the song was even bigger in their home country as it provided the soundtrack to the fall of the Berlin Wall. It is remembered as the song of German reunification and a message of hope and remains the best selling single of all time in the united Germany.

There are other popular songs that use Moscow and Russia as a theme, yet show little understanding or thought – many are more rhyme than reason. One peculiar post-script to the fall of the Communist bloc was the sudden fad for wearing Communist hats, insignia and badges, a fad that got as far as the high street. This coincided with the availability of flights to Moscow and Mrs Thatcher famously returning in 1984 to say “I like Mr Gorbachev, we can do business together.”

Rocky metamorphosed into Rambo. In the popular imagination the Communist villain (sorry, Drago, no rematch for you, comrade) was replaced by new antagonists in the middle east and North Korea.

Moscow as a captivating destination beyond the iron curtain lost its exotica overnight. 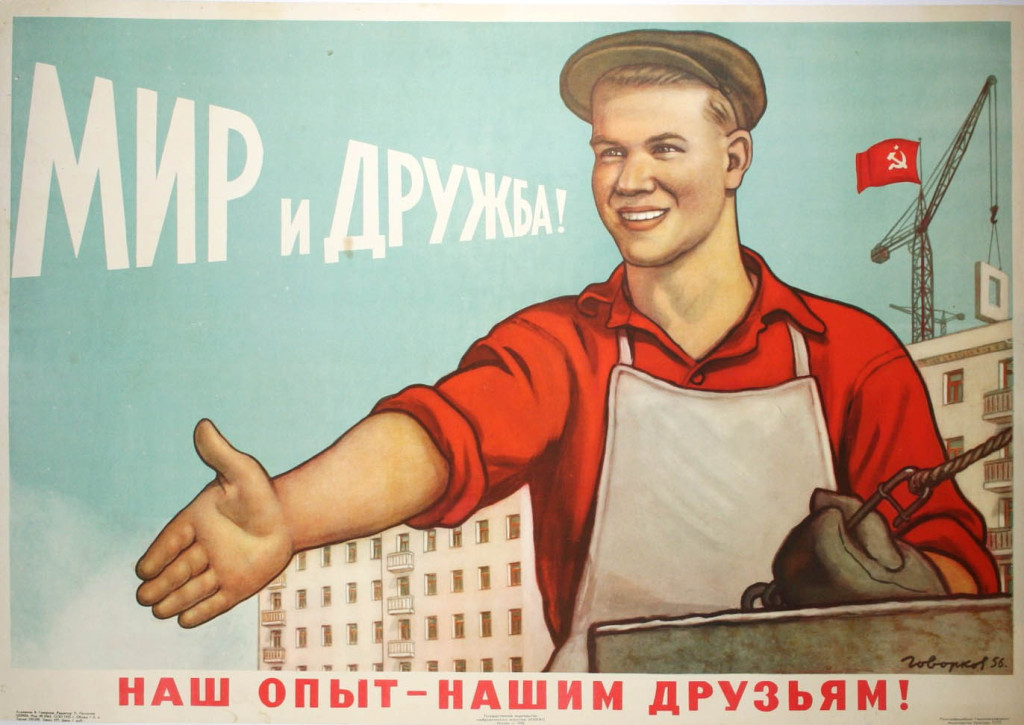 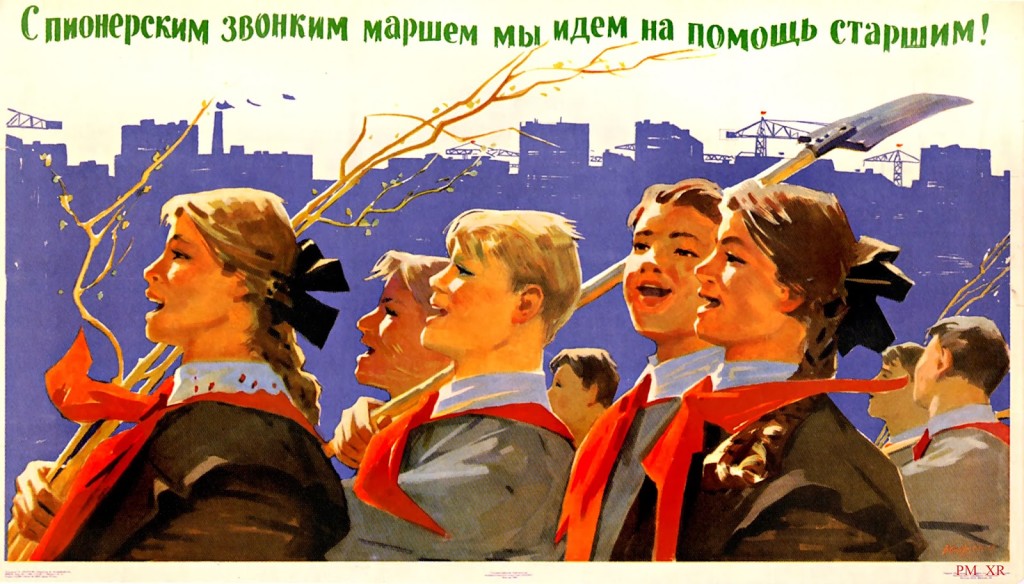