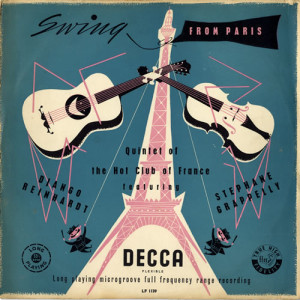 In setting out to compile a favorite list of Paris songs I admit to being totally anglo-centric. There are hundreds of exceptional songs and performances en francais and a few great blogs cover this very well (a great example is this by Paris Attitude)  so I won’t even attempt.

Paris seemed to have inspired the jazz generation very much – there are enough Frank Sinatra songs about the city to fill an album or two. In the canon of jazz standards there are several songs that are hard to avoid. April In Paris, Under The Bridges of Paris, I love Paris in the Springtime… You know the sort of thing. If you’ve heard them once you’ve heard them a million, and I’m not totally sure that they have that je ne sais pas, if you know what I mean…

Movies muscle into the action too, led by the extravagant An American In Paris, built around a sumptuous Gershwin score and Gene Kelly seemingly  romancing a young teen. Forget the silly storyline and just luxuriate in the the vibrant combination of color, music and dance. Throw in Funny Face, Gigi, and Moulin Rouge and the city is yours.

So many of my earliest memories of French culture and music are saturated with Cinemascope, from Gene and Vincente’s masterpiece (see above) to Leslie Caron’s Fanny (a schmaltzy remake of the old Pagnol classic Marius from the 1930s).

Here are two of my favorite French bombshells hamming it up for Louis Malle.

Elvis Costello was ever the cosmopolitan and this cut comes from one of his last great albums, Blood and Chocolate. Typical of this most eloquent of songwriters that he’s  referencing both the city of love/lights and the tragic figure of Greek mythology. I love the line where she hits her man with a paperweight of the Eiffel Tower.

I would like to include Winston’s Paris Rockin’ song, but I just can’t find a video that does the song justice. So here’s Winston on the streets with members of the The Bazbaz Orchestra. Winston was a big deal back in Jamaica back in roots reggae days . Now based in Paris he’s become a mainstream force thanks to his collaborations with accordionist Fixi from the rap group Java.  Fixi and Winston have collaborated on a number of cuts recently, all well worth a listen. Oh don’t miss this classic en acoustique, while you’re here.

The Gotan Project are a wonderful amalgam of nouvelle electronica and traditional styles, especially tango, all presented with a distinct French flavor. By all accounts a wonderful live act, they are a fascinating musical brew. The music is from the mucky movie of the same name, a film that’s now as dated and seedy as an old Renault Dyane.

Corrine looks so good strolling around the Fontaine des Fleuves in her party frock it’s hard not to include this lightweight pop-soul number in the list. Musically I prefer the Hammond-and-drum-machine approach, and I could well do with out the do-do-does.  Corinne’s from Leeds, back in my home county of Yorkshire, another cosmopolitan city that’s worth writing songs about.

Morrissey : Throwing My Arms Around Paris

Morrissey is just the sort to pull this off. A song inspired by a TV documentary on the lives of people who suffer from a physical and emotional attraction towards solid objects – the film featured a woman kissing the Eiffel Tower, and another who married the Berlin Wall. I’m serious. Take his line “Only stone and steel accept my love”.

He could have been singing about the tomb of Oscar Wilde (Epstein’s tomb lounges in the 20th arrondissement), or making an oblique reference to ‘second best’ Count Paris in Romeo and Juliet.

Or he’s madly in love with Paris Hilton. You decide.

“Parisienne Walkways” has Phil Lynott written all over it; to music written by the legendary guitarist Gary Moore – a member of Lynott’s band Thin Lizzy. It’s not totally original –  as you can hear from this clip Gary Moore half-inched the main refrain from a jazz standard, but it justifiably achieved status amongst the lighter-waving set. The sustained BB King style note, which Moore holds midway through for like half a week is just sublime.

I have two versions – the first the original cheesy pop video and then a clip from ‘One Night in Dublin, a Tribute to Phil Lynott’ which has Gary suitably off the hook.

There is something in-jokey going on in there somewhere, though. Lynott’s middle name is Parris. He was born in 1949. The first line reads “I remember Paris in ’49…”

Finally we come full circle for me, with the Friendly Fires tapping into the excitement and energy I felt just before my first Paris trip. A Paris that is as much in the popular imagination as it is in real life. Paris as a metaphor for love. The band, improbably, are from St. Albans. A most un-chic indie-dance outfit with swathes of 80’sness and cathedral reverb. Lovely.

I was an early collector of independently released punk rock, and Metal Urbain were the first release on Rough Trade Records. Wonderfully bratty Parisians with distorted guitars and a – then unusual – drum machine and primitive synthesizer backbeat. Their singer goes by the wondeful name of Eric Debris and it remains one of my favourite records of all time.

You can always count on Hollywood to steal the show, and this goofy number is just full of joi de vivre. Three characters arrive at the airport and immediately set out – separately – to explore Paris. Each heads for a separate landmark and they eventually converge at the Eiffel Tower, a place they’d earlier sworn to avoid as it was so touristy. The number is five minutes long and jump-cuts through 38 different locations. Sounds just like my first day there too.