Home » All entertainment » A Song for Sunrise – Mary Margaret O’Hara

Mary Margaret O’Hara turned up in London back in 1988 to play a show at one of those old London jewel box theaters.

She’d released a remarkable album earlier in the year called Miss America, which had been a fascination of mine from the off. I couldn’t wait to see if she could live up to her extraordinary record. 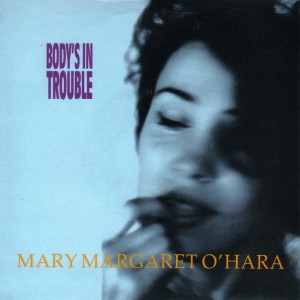 On Mary’s music there’s nothing particularly unusual going on. Accomplished country tinged pop, with some neat jazzy touches, especially on the ballads. It’s tight and beautifully played, like Steely Dan, or Hejira era Joni Mitchell. But it was the extraordinary voice skatting over the top that hypnotised. She has a beautiful range so it’s not immediately obvious just how experimental her singing is.

She also seems to step away from the script often, and move into a repetitive, speaking-in-tongues swirl of meaning. Yet she is – like a great jazz singer – fully aware of the music and can step back in just perfectly. Singers like Van Morrison and Tim Buckley have also done this, but Mary’s sweet voice hitting such notes takes it into the ethereal.

Some of her themes seem so deep and empathetic. Body’s In Trouble, for instance; is she singing about an inability to express oneself, to feel emotion, or is it all much deeper – about coping with illness or madness. It’s almost a tone poem, or a vocal jam session. THe music, so tight and carefully phrases still seems reponsive to the song.

Anew Day (not A New Day) comes along as a bright dawn, and skips along with such gusto compared to the songs before. The music feels like new sunlight – a bubbling bass, a reggae lilt – and the song appeares at first to be totally uplifting and encouraging “Everyone walk in brightness, because it’s a new day”, yet there are lines that read quite differently. “Is it better to disappear than just to stand so near a hole? When your own hand won’t recognize your face, makes you maybe go someplace…”

Music full of detail and contradiction and not at all the light and airy song that it appears to be.

And a wonderful clip of Mary Margaret at her best – on a live stage.

Life Without Buildings – The Leanover