Home » All entertainment » Songs For Yorkshire

Yorkshire is, for those that don’t know, God’s own County, the largest in England.

Visitors have to a bit tougher than the average. Yorkshire is a big, strapping rough-hewn diamond that even those born here are slightly in awe of. Here’s the tourism vid for the uninitiated. 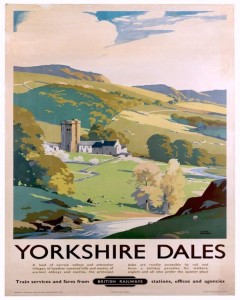 If you come to catch fish, be prepared to stand waist high in a picturesque, unforgiving river. If you want to write your poem expect to stand tall on the wildest moors, or brave the freezing fog upon Malham Tarn. If you feel the need to run get thissen ready for the Three Peaks Challenge. If you want to get wrecked, expect to dodge gangs of drunken pro footballers celebrating their new Premier League contract.

Southerners like to paint Yorkshire folk as archetypal northerners, giving us flat caps, a whippet dog and a union card; coming on with as much ee-bar-gum they can muster. We’re either living a black and white, film noir steel town existence, scraping a living stripping in Working Men’s Clubs, or we’re glowering down on some Technicolor landscape from a huge black horse, trying not to fall for Keira Knightley and swearing at the farm workers.

Nowt So Queer as Folk

This selection of Songs for Yorkshire deliberately sidesteps the great and the good. So no Joe Cocker or Jarvis Cocker. No Def Leppard or Spiders From Mars. Not even the one from OneDirection who owns a football team. Here the aim is to uncover some nuggets that you may have missed in the rush.

Yorkshire’s richest musical seam is its folk music, which errs heavily on dialect and choral song rather than instrumentation. Some of the songs below go way back. I’ll examine the leading lights in this area of Yorkshire music in another article, so don’t put your finger in your ear just yet.

Loads of folk know this as pratty flowers, and its a rural West Riding song beloved of blokes staggering home at closing time. Holmfirth Anthem, like a lot of northern folk tunes and sea shanteys, has a complex history. A little bit o’ this, a little bit o’ that… Its long been a popular choice at village carol “sings” at Christmastime, or at hunt meets in farming districts.

Kate Rusby, The Watersons, The Albion Band et al have all taken the song into the studio, but it’s the communal versions that remain most memorable.

My Girl’s A Yorkshire Girl

A song famously quoted by James Joyce in his spectacular modernist novel Ulysses, Yorkshire Girl is crying out to be rescued. A bawdy cover by Mumford and Sons or Flogging Molly would suffice. But until that day the song remains a fringe favorite, and officially hard to find on YouTube.

The ditty features two young men discussing their girls; as they find out that the respective girls share similar characteristics it dawns on them that they are both in love with the same lass – who turns out in the final verse to be married.

It’s highly likely that John Morgan, a blues keyboard genius from Devon who was left high and dry by the psychedelic moment, wasn’t being totally serious here. But musically it packs a blues punch that’s completely compelling. Once you get past the ee by gum lyrics it just goes off on one, Cream style.

Acting about with blues themes was de rigeur around then, what with early Fleetwood Mac turning up with songs like Somebody’s gonna get their head kicked in tonight. and Lazy Poker Blues. Whether they’ve convinced us that life is just as tough up north as it is down in the deltas of the Deep South I’m not so sure. Good try though.

Scarborough Fair is another of the great Yorkshire folk songs. It’s thought to date back to the great plague in the middle ages, and music historians note similarities with a Scots ballad that can be traced back to 1670.

It was most tempting to include the popular Simon and Garfunkel version of this song, but that would mean missing out on presenting Martin Carty’s much more traditional approach to the piece.

Carthy actually taught Paul Simon the song back in 1965 – after he’d picked up the song from legendary British folk singer Pete Seeger. No less than Bob Dylan had borrowed the lines and melody from Carthy’s arrangement to create his own song, Girl from the North Country.

Carthy’s first in line for status as honourable Yorkshireman, as he married into the first family of Yorkshire folk, The Watersons.

Catherine Howe was a beautiful Halifax-born actress who appeared in plenty of late sixties TV dramas, like Z-Cars, Dr. Who and Dixon of Dock Green. As a vocalist she would work in the rarified world of film soundtracks, and recorded one of those genius folk rock albums that lay undiscovered for years.

He most famous song is Harry, an all-too-familiar ballad that sounds like the theme from some TV drama. “Up North’ however is a sophisticated, jazz folk dream – from the aforementioned lost album from 1971.

Her approach is a treat – her prog-folk sound as delicous as Sandy Denny and Pentangle of old. She toured supporting Andy Fairweather-Low, Chris de Burgh, David Soul and later with Randy Edleman, but the albums and singles didn’t sell enough and she moved back to Halifax, quitting the music business altogether.

She came back to the fold many years later after contributing standout songs to the Sounds of Yorkshire album in 1984. To fresh ears her catalog is ranked alongside other late blooming singers Linda Perhacs, Bridget St. John and Vashti Bunyan – and she’s been known to play live in recent years too. Follow her Facebook adventures here.

Wakefield’s finest Bill Nelson was for a time one serious rocker, with a band capable of selling out big halls and giving the likes of Mott The Hoople, Queen and Thin Lizzy a run for their money.

Nelson’s guitar solos and Thin White Duke stylings attracted a lot of attention as progressive rock began to merged with the new wave sound. Nelson was an enthusiastic first adaptor of new technology and would soon head off into recording increasingly experimental, ambient instrumentals.

Adventures in a Yorkshire Landscape, especially in its live incarnations was a magnificent piece, with an extended improvisation that perfectly suited the Yorkshire landscapes that inspired it.

My favourite English poet was Ted Hughes, poet laureate of England after John Betjeman and Yorkshire through and through. Here’s a good example of his prose power, with Richard Armitage reading his poem Song.

To many, indeed most Americans he’s sadly better known as the husband of writer and poet Sylvia Plath, who he met and married in Cambridge in 1956.

Why did she end it all?
Was he just to blame?
There’s only two that know for sure
And neither one remain

Arctic Monkeys – When The Sun Goes Down

Their debut was the fastest selling debut in British music history, and no wonder. Expressive lyrics and hardscrabble tales speak directly to disaffected, chavbaiting 17-year-olds that crowded their moshpits and they compare well to British greats like Specials, Smiths, Pulp, and the Streets.

Writing about their debut venerable American indie website Pitchfork Music was scathing at first, but reading it back now its loaded with backhanded compliments.

“The Monkeys aren’t so much spinning deft tales of quotidian anxiety as just complaining about their first steps into nightlife, run-ins with bouncers, cops, and schoolmates. So they’re the UK’s emo, painting diaristic portraits of small-town and suburban life for teens in a country where fundamentalism is allegiance to a soccer club rather than religion.”

Roughouse vids like this one helped too. Belting stuff, cockers!

For Abel (formerly Nacional) are Rob, Colin, Jonny and Darren and are self-styled alternative / post-punk revivalists of the highest order. Yorkshire was from the Scottish band’s double A side single, though before you pass judgement Rob Armstrong is, as the League of Gentlemen put it, local.

Besides, it’s good to hear music with more than a little Wedding Present and Gang of Four about it. Go on – like ’em on Facebook.

New Orleans inspired music from the mean streets of  Yorkshire, contemporary brass music has the power to move the soul. Yorks has a vibrant tradition of competition based around communities and local industry, with colliery bands frequently taking top prizes.  The collieries may now be closed, but the passion for the silver bands remains undiminished.

Composed in the summer of 1984, James Barnes’s Yorkshire Ballad has become a modern classic – arranged for tuba and piano duets and for full orchestras, as the one that you see here. The version I got obsessed with was by the Tokyo Kosei Orchestra. Blooming marvelous!

“Over the years, many conductors and teachers have called me to ask about the work, and whether the tune itself is in fact a folksong.  Yorkshire Ballad is not a folksong, but it is written in that style. I thought I would write a little piece that might emote of the feelings and colors of Percy Grainger’s wonderful music, but, at the same time, was technically much more accessible to the younger player.” James Barnes

An unexpectedly defining moment in Yorkshire history was Le Grande Depart, the opening stages of the 2014 Tour De France cycle race. Alistair Griffin wrote a grand song – The Road – to help promote the event, which was attended by millions along the route and was a profoundly moving experience. The countryside looked glorious and the fans were fantastic. Yorkshire won a lot of friends that summer, that’s for sure.

If you think Alistair sounds familiar, his song Just Drive is the title song for Sky’s F1 coverage.

In the film Brassed Off, Gloria Mullins has been sent to her old hometown of Grimley to determine the profitability of the pit for the management of British Coal. She also plays the flugelhorn brilliantly.

Never mind that this piece was written by Spanish composer Joaquín Rodrigo, and that it was inspired by the gardens at Palacio Real de Aranjuez. It’s a standard of Yorkshire’s brass bands these days, so finders bloody keepers!

Last but not least I have to share one of the most over-the-top recordings of Yorkshire’s favourite song. It was originally composed to the Methodist hymn tune Cranbrook but the popularity of the dialect folk treatment put the original hymn into the shade.

In 2013 a rousing version of the song was recorded to celebrate Yorkshire Day, on August 1st. Working with tourism agency Welcome To Yorkshire, the producer roped in some of the county’s famous sons and daughters including Yorkshire Air Ambulance and the Yorkshire Regiment. All proceeds went to charity via Cause UK. Read more about the background to all this here.

The actual arrangement? Daft as a brush.

There you go. That’s my Yorkshire collection. Does the place proud it does. Feel free to comment below if you feel I’ve missed a classic. 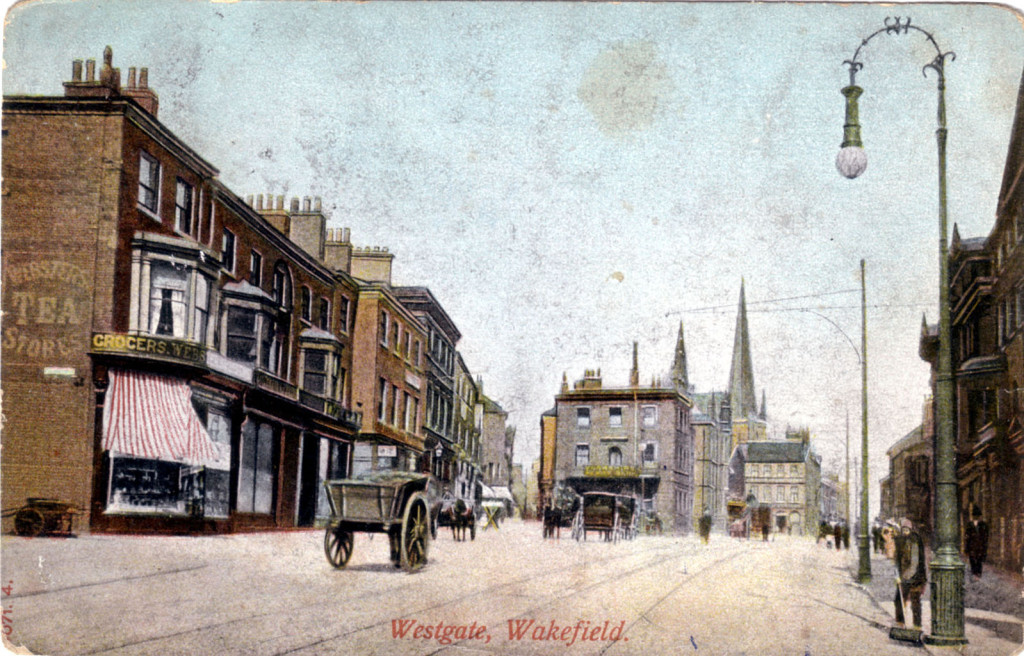 The town of Wakefield – Vintage Postcard 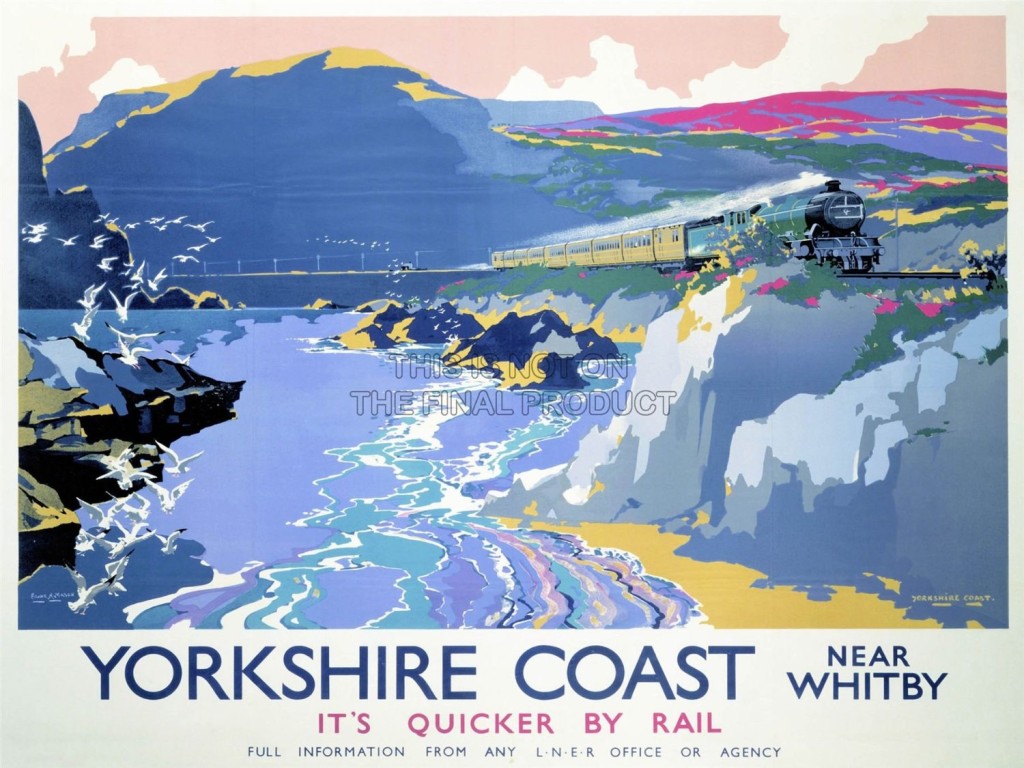