Taking The Rap – When Broward got Nasty

Home » All entertainment » Taking The Rap – When Broward got Nasty

”It is an appeal to dirty thoughts and the loins, not to the intellect and the mind.” Jose Gonzalez, Federal District Court – Southern District of Florida

On Monday, February 26th 1990 a Broward County Deputy Sheriff walked into his local record store, Sound Warehouse on Oakland Park Boulevard, and bought a cassette tape by 2 Live Crew. The recording, As Nasty As They Wanna Be had been released in 1989 alongside a cleaned up version, As Clean As They Wanna Be but it was the former that the sheriff took back to his office. 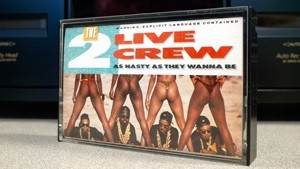 He had several of the songs transcribed and by Wednesday had filed an affidavit to Judge Mel Grossman of the Broward County Circuit Court, requesting that the court find probable cause that it was legally obscene.

Within days the judge had issued an order that agreed with the complaint, and before long agents and deputies were distributing the order to all record stores in Broward County. The message was straight. Stores should refrain from selling the recording and by selling it managers would now be liable to arrest under Florida State obscenity laws.

The drive to censor records wasn’t new. At least 18 states were looking into mandatory record-labeling measures at the time that 2 Live Crew were targeted. The Recording Industry Association of America tried to head off outside influence by asking record companies to voluntarily place warning stickers on potentially offensive albums, and “Nasty” was stickered up accordingly. IT was rude, crude and misogynist – but no more so than, saw Eddie Murphy’s Raw for instance. 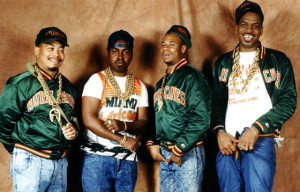 Miami rap group 2 Live Crew’s Nasty as They Wanna Be album eventually sold more than 2 million copies – earning the band millions. As the controversy made national news the sales continued to climb. Listeners of all ages bought it to find out what the fuss was about.

It all came to a head in the Federal Courthouse that June. The judge decided that prior to application of the three standards of the Miller obscenity test (prurient interest, patently offensive, lacking serious value), the first and second element of the test require a determination of community standards. X-rated videotapes and pornographic magazines obtained locally were displayed as evidence that the rappers were being singled out.

This was an era when Andrew Dice Clay’s ‘humorous’ recordings were being sold in numbers, and popular artists like Madonna were pushing the boundaries on stage. Just along the Federal Highway nude dance shows and adult book stores proliferated, yet the court paid no attention to the available range of films and magazines and live shows as evidence of similar community standards.

In a significant ruling the court denied that the form and style of Nasty had any artistic merit.

“The recording depicts sexual conduct in graphic detail. The specificity of the descriptions makes the audio message analogous to a camera with a zoom lens, focusing on the sights and sounds of various … sex acts. It cannot be reasonably argued that the violence, perversion, abuse of women, graphic depictions of all forms of sexual conduct, and microscopic descriptions of human genitalia contained on this recording are comedic art.” Jose Gonzalez – Federal District Court – Southern District of Florida

If You Sell It, You’re Going To Jail

Broward County Sheriff Nick Navarro stood on the courthouse steps in a bullish mood. “If it is obscene, we will make an arrest. If you sell it, you’re going to jail.” 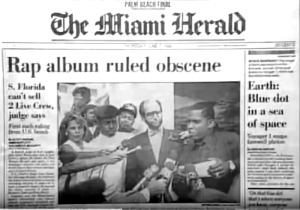 2 Live Crew’s defense lawyer, NOVA University law professor Bruce Rogow pointed out that the notion that adults should be able to decide for themselves was now under threat. “Judge Gonzalez broke some new ground here,” he said. “I think Andrew Dice Clay is in trouble in Fort Lauderdale. I think Eddie Murphy is in trouble in Fort Lauderdale. The government now may be able to be as nasty as they wanna be in cracking down on pornography.”

The director of the Florida American Civil Liberties Union went further, saying “It’s just amazing that an adult can’t buy a record album of their choice. I can’t believe America is celebrating the 200th year of its Bill of Rights by taking them away.”

Sheriff Navarro wasn’t slow to enforce the ruling in spite of the wave of headlines, TV talk shows, and debates about music censorship. Just days later the owner of a tiny store called E.C.Records was arrested for selling Nasty to an undercover cop, putting him in line to become the first person in the US to go to jail for selling obscene music.

Meanwhile, down in Hollywood’s Club Futura the 2 Live Crew began their set in an incendiary mood, starting their Friday show by leading the audience in a chant condemning Gov. Bob Martinez and Sheriff Navarro. Plain clothed officers videotaped the show, and after consulting with the Sheriff moved to arrest the band in the small hours. It was now clear that even the performance of the lyrics was in violation of a state statute – it wasn’t just the recording that was deemed offensive.

The case came to court very soon after the record store owner, Charles Freeman had been found guilty in his case (he was fined $1,000 and appealed). 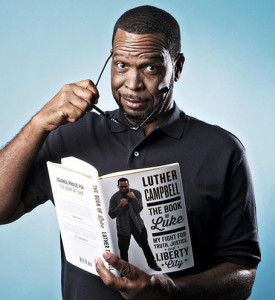 “I had the only black-owned label, I was the only one who could fight this fight. If I didn’t stand up, corporate America would keep trying to censor all of us. That’s how I saw it. Unfortunately, nobody else in hip-hop saw it that way. Not at the time. The major-label artists, instead of backing me, they distanced themselves.”
Luther Campbell 2 Live Crew – Miami New Times

Bringing a case against a small local act than, say, Public Enemy, N.W.A. or Ice Cube meant that the campaigners would not have to go head to head with big well-funded music and media corporations.

Finally the band got some heavyweight support as Bruce Springsteen gave the band permission to re-work his hit Born In The USA as Banned In The USA. There had been a call out for visiting bands to do covers of 2 Live Crew songs, to raise awareness, but few would take the risk. The band themselves encouraged the audience to sing along, in effect making the whole crowd violate the law.

This is a great example of the ‘Streisand Effect’, named after the singer Barbara Streisand’s attempts to suppress publication of her wedding photos, thus making them far more important to the world’s press thanks to all the curiosity. Ira Robbins of Trouser PressMagazine argued that Luther Campbell joined Larry Flint in the free-speech history books “as another crude sleaze-monger of trivial artistic merit whose prosecution nonetheless threatens basic constitutional freedoms… Regardless of the band’s ultimate place in history, the sound of an audience cheering “Head! Booty! Cock!” is unquestionably a cultural low.”

2 Live Crew were little known outside of Miami at the beginning of 1990. A year later they were selling in millions, racking up in suburban collections the world over as teens fell over themselves in the rush to own a banned record.

On May 7, 1992, the 11th Circuit US Court of Appeals overturned the obscenity decision. All charges were dropped. “What this does is let black folks know that the First Amendment really does apply to us,” said Luke Campbell after fighting what he called a battle against a racially tinged decision. “It says we can speak our minds the same way that white people do. This isn’t just a victory for 2 Live Crew. The entire music industry won big on this one.” 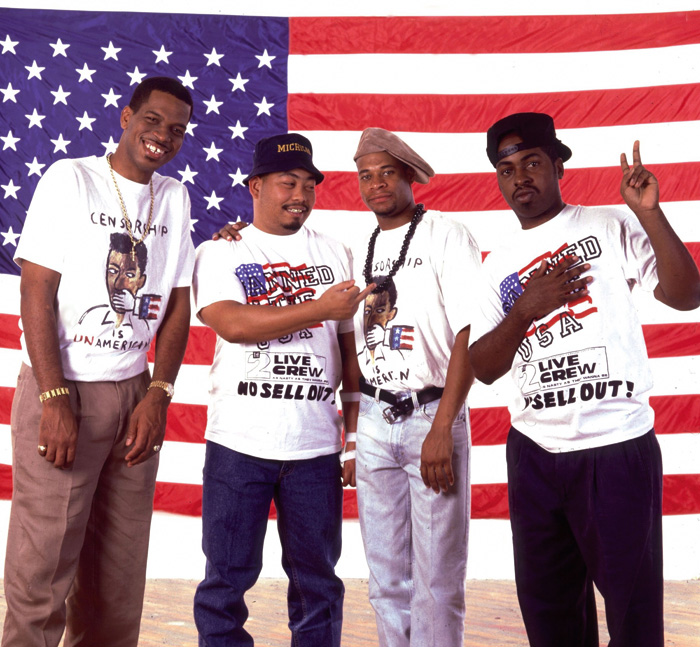