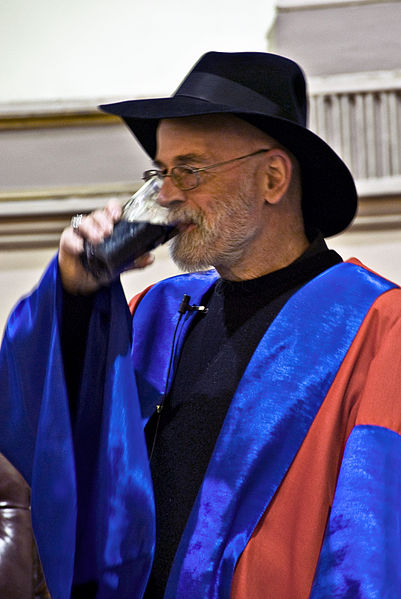 Author Terry Pratchett, who died on March 12th, 2015, wrote over forty books and it’s estimated that he sold 85 million worldwide. He was sixty six when he died.

Eight years previously, he had been diagnosed with a rare form of Alzheimer’s Disease and had campaigned to increase funding to go towards finding a cure and preventative measures.

This rare ailment did not affect his memory – its symptoms were physical. He could no longer type but found writing books even easier when he changed to producing them via dictation.

He made a large financial donation himself, hoping to encourage others and a television

He described his condition as an ’embuggerance’.  I think it would be a rather fitting tribute to the author if that word entered common usage in the English language.

He had been knighted by Her Majesty the Queen in 2009 for his services to literature.

Although Terry Pratchett had campaigned also for assisted suicide, his death was reported as being from natural causes. He died at home with his family present and his cat sleeping on his bed.

What a lovely (and wonderfully  eccentric) chap he was.