The Adventures of Enid Lindeman

Home » All society » The Adventures of Enid Lindeman

The Adventures of Enid Lindeman by Lyndsy Spence. 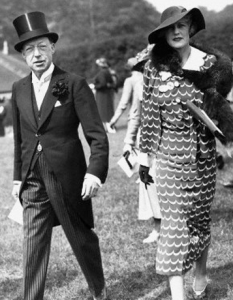 Standing at six-feet tall with handsome features and platinum hair, Enid Lindeman was never going to be a wallflower. As she gallivanted through life she accumulated four husbands, numerous lovers, and during the inter-war years her high-jinx dominated the gossip columns. Evelyn Waugh satirized her set in Vile Bodies, but the workings of his menacing imagination paled in comparison to the real thing.

Born in Australia in 1892, she was the great granddaughter of Henry Lindeman, who founded Lindeman Wines in Hunter Valley, New South Wales. A privileged, if nondescript, childhood inspired Enid to look for a life of glamour and excitement. She achieved this at the age of twenty-one when she married Roderick Cameron, an American shipping magnate twenty-four years her senior. Establishing herself as a New York socialite, Enid would literally stop traffic (‘the better to view this vision of perfection’) when she emerged from the Cameron building in Manhattan. But the celebrated marriage was short-lived when, a year later, Cameron died from cancer, leaving his young wife a fortune of several million dollars.

The year was 1914 and the newly widowed Enid left New York with her nine-month-old son to move to Paris to drive an ambulance for the war effort. With her beauty, charm and charisma, she became popular with officers, and it was reported that five men, having found her so intoxicating, committed suicide. (One blew himself up; another threw himself under Le Train Bleu; another jumped overboard in shark infested waters). Or, as Enid put it, ‘They were not able to take the strain.’ An old boyfriend, Lord Derby, Britain’s Minister for War, was concerned about the havoc she was causing amongst the officers and, hoping to tame her, he suggested she remarry. Although a millionairess in her own right, Enid was incapable of handling her finances and to ease this fiscal responsibility, she agreed. Derby produced her next husband, Brigadier General Frederick Cavendish, known as ‘Caviar’.

After the war, Caviar was given command of the 9th Lancers in Egypt. As she had done in Paris, Enid caused a sensation amongst her husband’s comrades in Cairo and, as a dare, she reportedly slept with his entire regiment. By day she schooled her husband’s polo ponies and by night she dressed as a man to play with the band in the officers’ mess hall. Cairo suited Enid’s flamboyant tastes: there were picnics by the Nile, parties in sandstone mansions, and rides by moonlight in the Sahara. She met Lord Carnarvon (another of her lovers) on his famous dig of King Tutankhamen’s tomb, and was one of the first to be taken down to the discovery.

In an attempt to distance Enid from hedonistic influences, Caviar took his wife, stepson and their two children to London, where the family moved into a townhouse in Mayfair. Domesticity never appealed to Enid, and she continued her pleasure-seeking ways in London’s nightclubs. However, in 1931, she was once again a widow when Caviar died from a cerebral haemorrhage at their apartment in Paris. 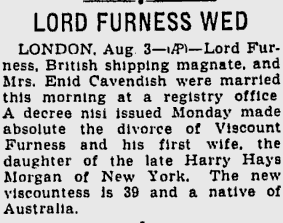 In 1933, she met and married Marmaduke ‘Duke’ Furness, the 1st Viscount Furness, whose second wife, Thelma, was a lover of the Prince of Wales. (His first wife, Daisy, had died onboard his yacht and he buried her at sea). Although immensely rich with a private railroad car, two yachts and an aeroplane, Furness ordered Enid to sign over her personal fortune to him. Furness’s London townhouse, Lees Place was not large enough ‘to hide’ Enid’s three children from his sight, so she rented a flat on Curzon Street for the children and their staff. Suspicious that Enid was not being faithful, and intolerant of her platonic (a rarity) friendships with men, Furness hired detectives to watch her when he was at home and abroad. In spite of his jealousy, he showered her with expensive gifts and granted her every whim, one being exotic pets which included a tame cheetah, walked everyday by the children and their governess. She held court at Furness’s villa La Fiorentina at Cap Ferrat in the south of France. A sensation wherever she went, it was said that people stood on chairs in the lobby of the Hotel de Paris in Monte Carlo just to catch sight of her as she passed through. Out of all her husbands, Enid claimed to love Furness the most: ‘There was nothing in the world he was not prepared to give me. Of all the men who loved me, and some were as rich as Duke, he was the one who was prepared to lay the world at my feet.’

A terrific gambler, Enid loved the races and casinos, and often carried a bag stuffed with £10 notes. Irresponsible with money, she squandered a fortune, and was as equally flippant with her jewels, keeping her pearls in Kleenex boxes because they were the closest thing to hand. She was also generous with money: if she saw ex-servicemen begging on the street or sitting on the pavement next to their watercolours for sale, she would order her chauffeur to stop the car, whereupon she would get out and offer them a job or find them a home. To the disapproval of Furness, she would take her children on jaunts to the suburbs to visit the ex-servicemen for whom she had found homes.

Furness died from cirrhosis of the liver in 1940. After his death, his former wife, Thelma, contested the will, claiming that their son should inherit his estate. After a long legal battle, Furness’s eldest son (having been reported as missing in action) from his first wife was declared dead and the law sided with Thelma. Enid was not rewarded the money she had surrendered to Furness when they were married, but she was permitted to keep Lees Place in London. With the war raging around them, Enid and her daughter decamped to their villa in the south of France where they tended to prisoners from the detention camp near Eze. Two years later, they escaped France and travelled to London by way of Portugal, where Enid used her influence to secure them passage on a flying boat.

In London, Enid was dubbed ‘The Penniless Peeress’ by the press. Down on her luck, she met Valentine Browne, the Earl of Kenmare, and famous gossip writer of the Londoner’s Log (then known as Castlerosse because of his former title Viscount Castlerosse). The confidant and travelling companion of the press magnate Lord Beaverbrook, Valentine had lived an excessive life of debauchery, and had been a close friend and lover of Enid’s when they both lived in Paris during WWI. Divorced from the scandalous courtesan Doris Delevingne, he was hoping for a more stable wife. They were married in 1943, and Enid became Lady Kenmare. An enormous gentleman who was reported to have sat on a dog and crushed it to death, Valentine’s doctor warned Enid he had a weak heart and was to abstain from sex as it would surely kill him. She rejected the doctor’s advice: ‘It was one of the only pleasures left to him in life. How could I ration him?’ He died of a heart attack less than a year after they were married. In her boldest move yet, Enid, at the age of fifty-two, claimed she was pregnant and as such could hold onto the Kenmare estate until the potential heir was born. She kept up the charade for thirteen months until the estate was eventually given to Valentine’s nephew. Having buried four husbands, Somerset Maugham dubbed Enid, ‘Lady Killmore’.

A chameleon to all the men she fell in love with, Enid would become their ideal woman and his interests would become hers. As her wealth grew, through inheritance and marriages, her life became a grand production. All purchases centred around the bedchamber: there were silk sheets and embroidered silk and lace pillowslips (changed everyday), and nightgowns and negligees were bought in abundance. The bedroom, her natural habitat, was sprayed with liberal amounts of Patou’s Joy, then costing three times more than any other scent, and the lady’s maid was ordered to spray the nightgowns and negligees, as well as the bedclothes. Leaving the beside lamp on, the maid would then open the door to Enid’s bathroom and fill the bath to a certain level with hot water and scent. Presumably Enid, whenever she returned, would add more hot water to it. However, Enid was never seen in bed with a man, not even her husband, for she considered that ‘vastly improper’.

It was a role she knew well, and with copious amounts of money at her disposal, Enid played the part to perfection. Having outlived her lovers, in her later years she was revered as a society hostess amongst film stars, with La Fiorentina becoming a hub for Hollywood royalty. She died in 1973 at the age of eighty-one.