The Art and Craft of Wood Engraving

Home » All style » The Art and Craft of Wood Engraving 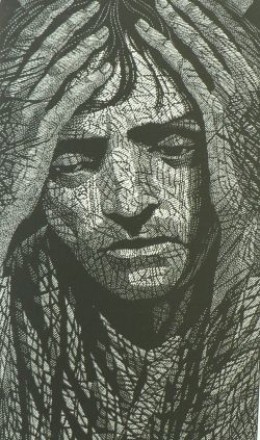 I want to share my attraction for wood engraving with you.

My retirement profession now is book seller and I make a point of selling books with wood engraved images. Some are so sublime it is difficult to part with them – although they pay my bills when they go.

The aim of this article is to highlight the work of some talented wood engravers, past and present, and to share the beauty of their work with you.

My choice is, of course, subjective. But once you start to get interested in wood engraving, you will quickly identify your own favourite artists.

I have taken all the photographs in this article from books in my collection. The one shown in this introduction is ‘Raskolnikov with head in hands’ from ‘Crime and Punishment’, published by Primrose Academy, 1999. The wood engraver is Harry Brockway. 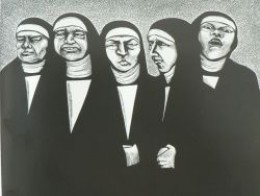 Wood engravings are used to illustrate books, and have been widely used in the popular ‘Folio Edition’ series. Wood engravings have been used by Fine Press printers, such as the Canadian Barbarian Press, or the British Whittington Press, to produce fine quality limited edition books, as the small print run can allow the illustrations to be printed directly from the original blocks onto the paper without damaging the wood.

The starkness of wood engravings can add a sombre note, where appropriate to the text, or make the reader look at a landscape, a figure, an animal, with new interest. Wood engraved images can be immediately recognisable for what they are, or surreal in their interpretations of familiar scenes; they can illustrate mythical scenes, make metaphorical points, or used to explore the artist’s own ideas in a stream of consciousness way.

Wood engravings can also be joyful and vibrant in its execution – the work of John Lawrence, for example – can be playful, expressing a joie de vivre in its style, colour and movement (see example below).

Equally, their starkness can be used to good effect for social commentary purposes in books or journals – as the illustration of the five nuns (above) suggests. The engraver, Hilary Paynter, was inspired to engrave this, with the sardonic title, ‘The Sisters of Little Mercy’, based on the unhappy experiences of her sister-in-law, who attended a Catholic boarding school run by nuns. The dark habits of the nuns lent themselves to the stark tones of the wood engraving.

Wood engravings are a popular medium to create distinctive bookplates, and engravers will work closely with a commissioning reader to produce Ex Libris plates that express something of the reader’s life, character and identity.

Wood engravings are also produced as original or limited edition prints. Traditional and recognisable rural scenes are very popular as prints, but metaphorical interpretations of land, sea or animal life, in its relationship to mankind, have made a big impact in recent years. The Russian engravers, Rudolf Kopylov, and Vitaly Moiseev, and Polish engraver, Hubert Borys, for example, make powerful statements about mankind and environment through their work.

Wood engravers are artists who often work with other art mediums, although there is a particular link and affinity between wood and linocuts, sculpture, calligraphy and printing. Eric Gill (1882-1940) for example worked with stone, was a calligrapher, typography designer, and wood engraver. Wood engraving then, can be part of the artist repertoire of an artist and used to create a particular effect.

Wood engravings have featured too in art on a large scale, in terms of its audience. The wood engravings of London-based artist, David Gentleman, have appeared on postage stamps and were commissioned by London Transport as a mural design for wall tiles at the Embankment underground station. 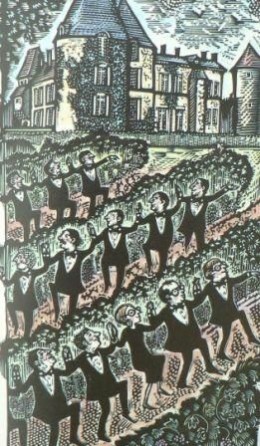 Wood engravings don’t have to be sombre. Here we see an example, above, of the exuberant art of John Lawrence. Image taken from Jancis Robinson’s ‘Food & Wine Adventures’ (1987) 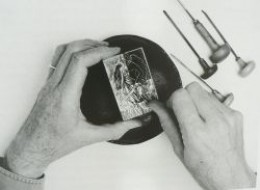 Wood engraving as we know it today involves cutting finely into a wood block so that the etched image stand out in relief on the end grain. When the surface of the block is coated with ink, the raised surface of the block appears as black when pressed hard into paper, whilst the wood below shows as white on the paper. The image can be cut by reference to the image in front of the engraver, or the image can be traced onto the block and cuts made into it (bearing in mind the relief nature of the final printed images).

Woodcuts are different from wood engraving in that a woodcut is cut into plank wood, whereas wood engraving is done by etching into the end grain box or other hard wood. The former tends to produce broader images that incorporate the wood grain, whilst the latter produces work of finer detail.

Etching or carving into wood is a very old art form. It builds on other forms of engraving, some as early as 30,000 BC, of engravings of animals carved onto rock, ivory and pebbles. The incised line in hard material creates a more permanent record, thus more satisfying for the artist.

Decorative engravings on metal, ceramics, glass and wood were to follow, but it was with the invention of the printing press that wood became a popular medium for carved images for printing purposes. Papermaking was first established in China, perhaps as early as AD65, and engraving on wood, and printing on paper, was a technique already established in Japan and China at that time.

The techniques of papermaking gradually arrived in Europe and with the arrival of the printing press, this revolutionised the communication of ideas, reinforced by images. Wood cuts were used to produce carved relief images, but these tended to be fairly crude, in terms of tone and fine detail. It is now widely regarded that Thomas Bewick, using techniques that were already known, but not widely practised, developed the practice of wood engraving – with its fine lines and range of tones – that we associate with wood engravings today. Bewick lifted the practice from a craft into an art form, and this is linked to his skill as both a gifted artist, observer of nature.

The period of 1900-1960 was a significant one for innovation and creativity with wood engraving carving new paths in expressionism. Artists, such as Eric Gill, Edward Bawden, Eric Ravilious, Robert Gibbings, and Reynolds Stone used wood engraving and other artist medium as part of their response to the rapid changes in society and emergence of modern art movements in this period.

However, with the rapid growth of colour printing and revised interest in photography, wood engraving fell out of favour for a while, but revised its fortunes in the 1980s with the emergence of new talent and new ways of self-expression in engraving, including the combined use of engraved materials (wood, lino, plastic), wider choice of printing papers, and greater awareness of creative trends in engraving from across the world.

Brief guide to the techniques of wood engraving

A succinct and illustrated guide to wood engraving techniques by wood engraver, Andy English. Click on the link below. 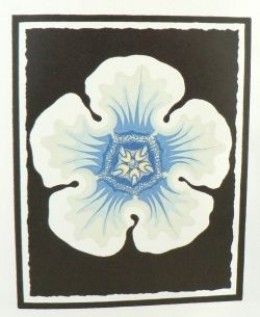 Most wood engravers work in black and white, although colour has been used in wood engraving for centuries, using a number of separate but interconnected blocks inked with different colours; a technique that is still used to this day. A range of engraved materials can be used to combine the colours, including lino cuts, Perspex and other synthetic materials. This can reduce the cost of printing, as box or other similar woods can be expensive to use.

Another method is to use just one block for the entire print. The print is made first in one colour, then more of the wood is removed in stages and subsequent colours over-printed. The use of coloured papers adds another colour dimension to the equation. 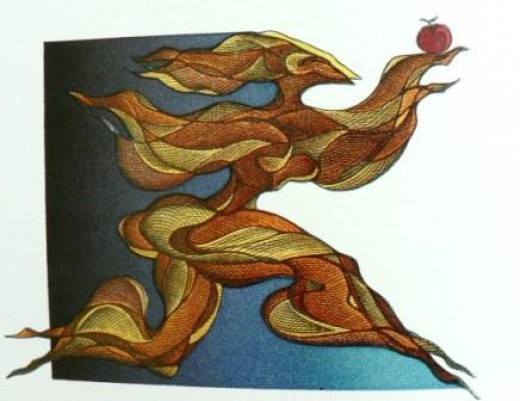 An effective use of colour in this energetic bookplate engraving by Russian engraver, Alexander Savitch.

WOODBINE BOOKS: I have a good range of books illustrated with wood engravings. If you visit my site (link below), you can do a word search, using ‘wood engravings’ to take you to the right books.

The Society of Wood Engravers

The UK based society has links from their site to related organisations in North America and elsewhere, as well as to suppliers of materials for wood engraving, fine press publishers, galleries and engravers who are members of the organisation. 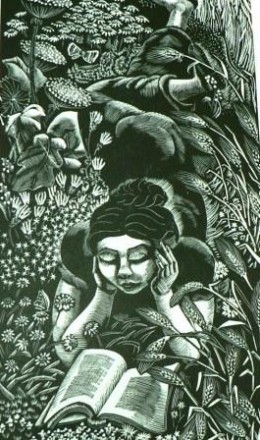 Lovely engraving by Rachel Reckitt in ‘Lost and Found’, text by Hal Bishop’, published by The Whittington Press’, 2010. Rachel Reckitt, who died in 1995, made this engraving in the early 1950s for an unpublished edition of George Eliot’s ‘The Mill on the Floss‘. 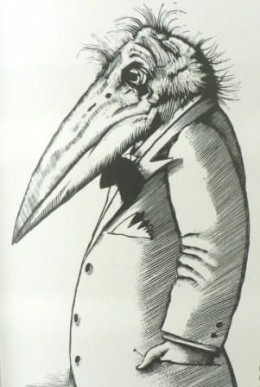 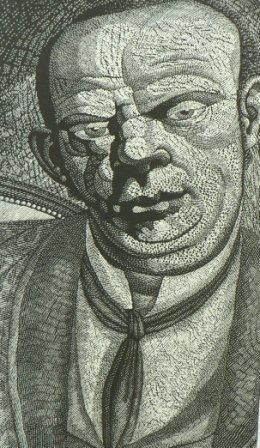 Image from ‘Crime and Punishment‘, engraver, Harry Brockway, published by The Primrose Academy, 1999

Wood engravings are often a feature of fine press and limited edition books, where they can be printed from the original blocks.

The FPBA will link you to sources of fine press books with wood engravings, including publishers and book sellers. 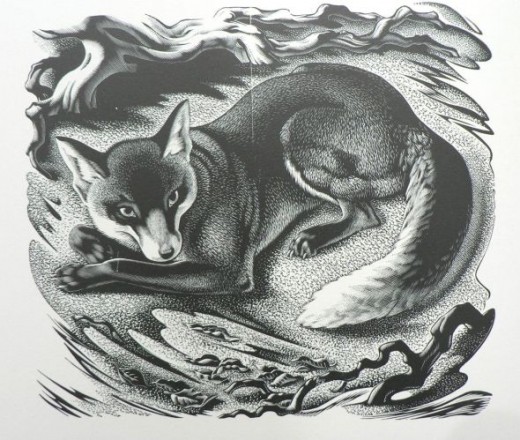 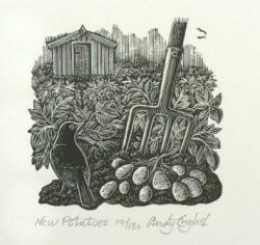 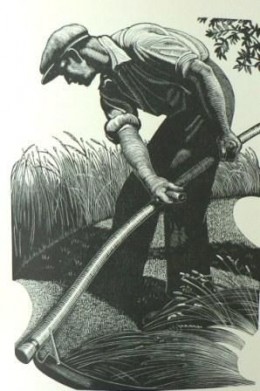 Example of work by Clare Leighton, one of the great wood engravers of the 20th century. Illustration taken from her book, ‘Four Hedges‘ (1935) 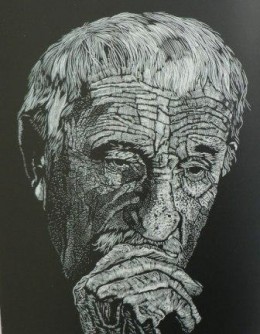 This wood engraving by French engraver, Francois Marechal, captures the dignity of his subject. Wood engraving can be particularly effective in portraying the impact of time on faces.