Home » All books » The Blood Sugar Solution: The Book That Really Taught Me How to Be Healthy 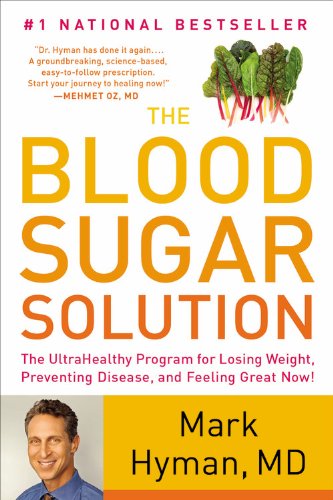 I used to have one of the worst diets ever. I’d typically drink fruit juices with almost no real juice, or sodas, with plenty of high fructose corn syrup. I almost never drank actual water. I’d mainly eat white bread, the fluffy soft kind. I’d eat candy all the time, ice cream for meals, or meals of goldfish crackers and chocolate mint cookies, and I loved fast food.

In 2005 I began taking psychiatric medications for an anxiety disorder, and my health began to plummet. It continued to worsen, and by summer 2012 I was up to 239 lbs, when I had previously weighed 190 lbs. I also developed severe, torturous restless legs syndrome.

Dr. Mark Hyman was introduced to me by my dad, who had me watch him speak on PBS. The explanations about health were different from what I was used to, although made perfect sense. I went to my local Barnes & Noble and purchased his book, The Blood Sugar Solution, and decided I was going to do everything he recommends.

The book has quizzes to see where your health stands in various areas. I scored in the awful range on six of them.

Here’s what I changed

First I stopped eating anything with MSG, trans fat, or corn syrup. Then I eliminated other types of sugar, white flour, and any drinks besides water. I began to avoid any foods with chemicals or anything artificial. I began to avoid GMOs and industrial oils, and discovered through Dr. Hyman’s advice that I’m sensitive to gluten – so I stopped eating all gluten grains.

Part of what I did involved following Dr. Hyman’s advanced plan, which lasted 12 weeks, and I did everything he said to, including buying the supplements he recommends. I began to take walks every day, and to study other exercises I can do at home. I learned to avoid many common household products which are actually very toxic. I began to study health and nutrition constantly, and have become an expert where I was once totally ignorant.

The results have been amazing

By early 2014 after following Dr. Hyman’s advice and changing my diet over the course of nearly two years, I’d lost over 50 lbs, and weigh less now than I did when I got married in 2003. Clothes I was not fitting now fit very comfortably.

My anxiety disorder is more than 95% eliminated, and I don’t take psychiatric medications anymore. My restless legs syndrome symptoms have entirely disappeared – but come back some if I eat gluten, corn syrup, or MSG in any of its forms.

Something completely shocking is that lifelong chronic allergies, which caused me to almost never be able to breathe through my nose for most of my life – despite allergy shots, medications, and everything doctors could come up with – completely disappeared. It’s gone, and this was a very unexpected but is very welcome change that came with all the other health improvements.

On the tests in the book, I now score in the safe range on all the ones I before had scored very poorly.

This is all real, and I feel so grateful for Dr. Hyman and this book

This doctor’s perspective is to treat underlying causes of health problems, rather than what the mainstream medical industry typically does, which is endlessly suppress symptoms with drugs. Bizarrely, his approach is labeled ‘alternative’ and ‘controversial,’ which I have learned means not supported by the drug companies, who control nearly everything in mainstream medicine – and their perspective is also promoted by government organizations, such as the FDA, and the mainstream media.

What our medical system excels at is treatments in emergency or crisis situations, although other aspects often fall short due to the conflict of interest – they make money by us being ill, not healthy.

Ask yourself if you truly want to be healthy, especially with the food you eat, which has a gigantic impact on how you feel and on many problems the mainstream medical industry wants you to believe are incurable, have no known cause, and are only treatable with expensive prescription drugs. If you’re ready to really be healthy, I urge you to start listening to Dr. Hyman. With this book, you can truly revolutionize your health. It’s probably the best investment, money-wise, I’ve ever made.

I love to share what The Blood Sugar Solution plan has done for me, and if you have any health concerns, chances are it will help you too. Very highly recommended for anyone serious about their health!