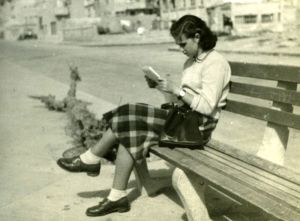 Have I ever told you that neither I or my other half pay too much attention to movie ratings? I guess for many years we have and been so disappointed in what was considered 5 stars and enchanted with some that only rated 2 or 3….

The Book Thief is based on a novel written in French “La Voleuse de Livres” , and takes place in Germany before and during the Second World War. This movie though is unlike any I have seen about the same subject. This movie is taken through the eyes of a young girl who is being shuttled around while people try to figure out what is going on around them.

Liesel is on a train with her mother and brother fleeing the Communists from their homeland. Her little brother dies en route to Germany from one of the Russian occupied countries and after burying her son, her mother places Liesel in the care of the RED CROSS. Many children at that time were displaced and adopted by other families. It’s not something we really hear too much about.

Liesel, and her adoptive parents are all good people trying hard to make the best out of all the calamity that is going on around them. Learning to read was of utmost importance to Liesel and her Pappa……he encouraged her to learn to read and to make books her best friends.

As the movie progresses we see how children learned about Nazis and how ruthless they were. Most children were swept into an ideology before they were old enough to understand what was being asked of them. Some children were just as mean and self serving as the regime and it showed in the way they spoke and played together.

The whole movie has you wondering who the narrator is, until almost the very end and then you understand that in war there are many deceptions and all are losers, but for those few who know what life and loving is really all about.

This is truly a wonderful movie that had me riveted to my seat until the last image filled the screen.

Starring Geoffrey Rush and Emily Watson with Sophie Nelisse, I would recommend this movie to anyone who wants to round out their thoughts on WWII.