The Flight of the Phoenix: Classic Movie

Home » All entertainment » The Flight of the Phoenix: Classic Movie

The Flight of the Phoenix: Classic movie 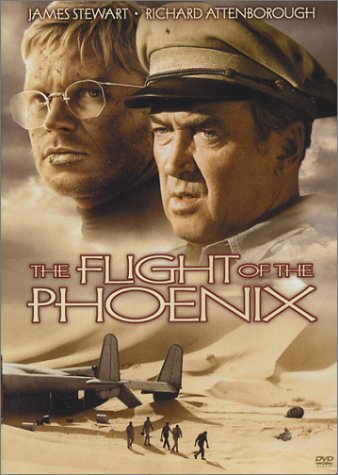 The Flight of the Phoenix

This 1965 film wasn’t a huge box office hit, although it was nominated for two Academy Awards. Since then though, it has become a cult classic. Maybe it was a little ahead of its time.

It was based on a novel which is equally full of suspense and conflict (see below).

As you can see from the image of the left, the film has a distinguished cast, including James Stewart and Richard Attenborough and it tells the story of a diverse group of men who, because of a plane crash, are stranded in the Libyan desert.

They have no working radio and a sandstorm – that’s what caused the crash – blew them so far off their original course so they know that any rescue attempts will be futile.

The men are a mixed bunch.  There is little sense of camaraderie. They have a small amount of food (primarily dates) and enough water to last them for about two weeks, as long as they try hard to conserve it.

Knowing that they won’t be found by any search teams, they know that their survival is in their own hands, but how?

One of the men comes up with an outlandish idea. It seems crazy. But he is convinced that it will work. Reluctantly, and with no other hope in sight, the other men agree. The clue to the idea is in the title of the film. The ‘expert’ who had the idea arranges and organises the work they have to do and he is strict and determined.

But a group of diverse characters in such a perilous situation is volatile. Arguments and clashes are inevitable. Then, they discover that the ‘expert’ isn’t exactly what he had claimed to be…

Working on this film was veteran stunt pilot Paul Mantz. He wasn’t supposed to have been working on the film originally but he was standing in  for his friend who had broken his leg. He was flying in the desert film scenes when the plane broke apart, cartwheeled and crashed, killing him and seriously injuring another stuntman who was also in the aircraft.

The final credit on the film is:

See the novel and the various format available below.