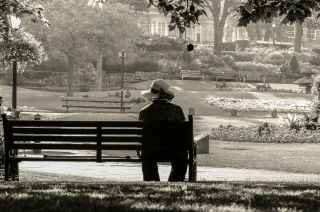 While writing Are You Afraid of Alzheimer’s Disease , I grew more interested in where we are headed with this horrendous disease. So I thought I’d research further and share some statistics.

As you may have read in some of my earlier articles, Alzheimer’s disease is currently ranked #6 in leading causes of death. The number is skewed though because often rather than showing Alzheimer’s as the reason, heart failure, pneumonia, and the like may be the immediate cause and is thus shown as such. The number of deaths is hard to pin down because of that, but it is estimated to be over 500,000 annually.

The amount spent on Alzheimer’s research is expected to be around $560 million in the coming year.

A bit off balance, wouldn’t you say?

Let’s look at the number of people diagnosed. It is estimated there are 5.2 million cases diagnosed in the United states alone. That number is around 36 million worldwide. Our government is currently spending $140 billion on health care for those with Alzheimer’s. Total costs for care are over $300 billion That is just what the government is providing. We’ll stick to those numbers for now, but I know how much individuals and families themselves spend and sacrifice for care.

Many in the industry believe we are likely to have one million new cases a year in America. With the baby boomers aging, it’s no surprise the numbers will grow so substantially. It is expected by 2025 there will be at least 7.5 million, by 2050 over 13 million. That is only in the United States. The cost at that point will be over a trillion dollars. Worldwide it is estimated there will be over 60 million diagnosed by 2030.

WHO WILL PAY FOR IT?

Now remember that the average lifespan with Alzheimer’s is 8 years. For most of those years the individuals are infirm and unable to work. They will either spending down their income or being supported by families and/or the government.

How can the government afford that? Right now it is estimated it pays for three quarters of it between Medicare and Medicaid. Do you think that can continue?

The disease is also one of the costliest because care is required for so many years. While it may not have the immediate need you see with cancer and heart disease, the length of care and increasing need for care take costs up enormously. Clearly they all won’t need residential care in the beginning, but at some point it will be recommended.

A reasonable cost for a memory care residence is around $4000 a month. In some areas you can double that and more, but lets use $50,000 annually. The government may negotiate a lower price through medicare and state plans, but lets use this number for now. If you have 1 million people requiring full care from the government, the cost is $50 billion PER year for every million. Remember that care may be needed for many years.

You can see it will soon be completely out of control. It may now be unsustainable. How will costs for care affect the tax rates then? How about insurance premiums for those of us who are still able to pay them? How will the long term care be paid?

With the increasing numbers there will also be a huge need for more care facilities. That may be easier to accomplish than it will be to find the number of caregivers that will be required in those facilities. It’s a tough job that takes a special heart. Of course more doctors, nurses, and nurse practitioners will be needed as well as more medical care and facilities. There have already been several studies that show that by 2020 there will be a shortage of at least 24,000 doctors. That statistic could go as high as 200,000. If you think you have to wait a long time to see some doctors now, what will it be like then?

Are you thinking family should care for their loved ones themselves? With the increasing numbers and lack of sufficient care facilities there may be no option. Realistically I don’t think that is best for the person with the disease or for the family. It is just plain hard to deal with that on your own, hour after hour, day after day. In a facility there might be ten to fifteen caregivers spread out over the 24 hour time frame to help, depending on the size of the facility. They clearly understand you can’t do it alone.

THE NEED IS URGENT

When you evaluate the numbers, our government, health officials, and every individual in the nation should be pushing for more research. I’m not saying it is the government who should be paying more for it either. Clearly there are many foundations and individuals who contribute vast amounts to research for the other diseases we mentioned above. I would implore them to include a portion of their funds toward Alzheimer’s. As individuals we can donate to organizations like the Alzheimer’s Association. They show that 78% of their donations go directly to research. We can contact our government officials to raise a cry, to direct requests for funding.

We must find a cure. A treatment will be a good start. Postponing onset not only gives the individual his health, but also lessens costs substantially. At the very least, a person might be able to be cared for in their homes for a longer period of time.

There are many researchers making good progress toward treatments and a cure. Some tests haven’t worked as well as expected, but others show promise. Every day I read about new tests and research. A recent one is testing a treatment that might grow new brain cells, thus giving back memory in the earlier stage. There are so many directions treatment can go. These scientists and students deserve our gratitude.

Still there must to be a cure. A cure would mean a large number of those people would continue to be self supporting. A number of people would not be spending down their funds before qualifying for assistance. They wouldn’t necessarily need government support. So many people would be able to continue a normal family life.

Most importantly, they wouldn’t lose who they are. They would remember.