The Last of the Blonde Bombshells

Home » All entertainment » The Last of the Blonde Bombshells

The Last of the Blonde Bombshells: Movie 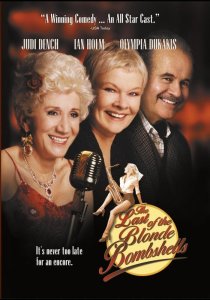 If like me you’re tired of some of the films we see today and are looking to watch a movie that’s truly hilarious, a great story and a little bit of a weepie then I highly recommend The Last of the Blonde Bombshells. As a bonus,or rather two, it has wonderful music and an impressive cast including the fabulous Dame Judi Dench.

The film flips between modern day (well, 2000) and the Second World War years.

Judi Dench plays Elizabeth. Elizabeth has just been widowed and we discover in the first scene that she is not a conventional widow and grandmother who is going to retire knitting in her rocking chair.

Shortly afterwards, her young granddaughter, discovers an unknown side of her grandmother – during the war, when she was just fifteen, Elizabeth played the saxophone in an all girls band.(Well, almost. Read on).

Elizabeth takes up the saxophone again and starts playing with a street musician, busking on the streets. They have a good arrangement. She’s happy for him to keep the money they earn and he pays for the drinks in the pub afterwards. Perfect.

Her grown up, at her snooty children are totally horrified. Mother playing the saxophone on the streets? She must have gone bananas. She surely needs psychiatric attention? It gets worse for them.

Elizabeth is reunited with the drummer from the wartime band. The drummer wasn’t a girl though. It was Patrick who was on the run during the war and played in the band in drag. So now Elizabeth’s children realise that not only is she busking in the streets, she’s running around with some old transvestite. Their horror can only be imagined.

Here’s a video clip to give you a flavour of this wonderful film.

Elizabeth has a plan. She wants to locate her former bandmates and re-form so that they can play at her granddaughter’s school dance. Together she and Patrick set out on their mission. But the war was a long time ago. One band member has died and another has advanced dementia. Another is a wealthy, reclusive alcoholic, another has found religion, one is in jail…. it seems like an impossible task.

It is a truly delightful film – highly recommended