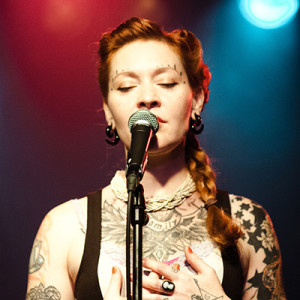 “I was driving in to meet the circus. I’d been driving alone for about eight hours, and I stopped in the French Quarter to use a phone to find out where I was supposed to go to meet everyone. I looked around and noticed the gas lamps and the classic, Old World feel, just this feeling of timelessness. And I eventually learned that it’s a very nurturing place to things that are different. They’re supported. They’re celebrated. And I knew immediately that this was where I belonged.” Meschiya Lake

I guess Jackie and I got lucky. We’d just emerged from taking lunch at the River’s Edge Cafe by Jackson Square in New Orleans and we were heading north, into the French Quarter, looking for something to do. This was October of 2007.

On the corner of Royal and St. Louis we were stopped in our tracks by a band of ruffians playing the finest street jazz you’ll ever hear. They were called Loose Marbles and were featuring their regular guest singer, Meschiya Lake, who just rolled up her sleeves and belted out some fine Bessie Smith style hot jazz. All of a sudden Jackie and I were not going anywhere soon.

Meschiya was out there vaudeville style, her fine voice echoing down Royal Street and literally stopping the traffic. No microphone necessary.

Loose Marbles, it turned out weren’t just any old busking crew. They were a kind of loose collective who would summer up in New York’s Central Park and Washington Square, with the odd gig in Europe for good measure. They’re built around a revolving crew who bring along clarinet, trumpet, banjo, washboard, accordion, trombone, guitars, sousaphone, standup bass, guitars and if the vibe is right some crafty dance moves too, courtesy of Chance Bushman and Amy Johnson. 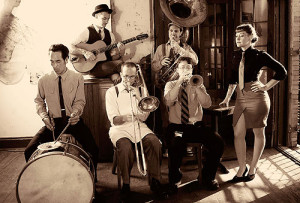 New Orleans street jazz seemed to explode with talent around that time. Other names to watch were Tuba Skinny, The New Orleans Moonshiners, Muscat Ramblers, and the Dead Man Street Orchestra; bands who skipped the high-price festival venues and the child-proof bars, taking it onto the street, just playing for kicks and tips.

Meschiya, though, looked like a star. We made a point of remembering her name, because she wasn’t going to be singing in the gutter for long…

Meschiya’s story is the stuff of novels. In 2000 she joined the Know Nothing Family Zirkus Zideshow and End of the World Circus, as a fire eater – a circus that traveled all over the country, wintering in New Orleans.”I ate glass – mostly light bulbs. I never bit directly into them – I usually asked someone to crush up the glass beforehand. But, yeah, that was my act.”

“There were budding jazz musicians among the circus troupe and we’d sit round the camp fire and sing and play these great old songs. Being an old punk rocker I could sense a similar rebellion in singers like Bessie Smith, who sang in Young Woman Blues about how she was never going to marry and that she was going to sleep with whoever she wanted to. For a black woman in the late 1920s, this was bold and provocative stuff, especially as she lived the life she sang about. So I decided that I wanted to sing these songs that were catchy and that people could dance to but were in their own way really quite eloquent.” Meschiya Lake – The Herald 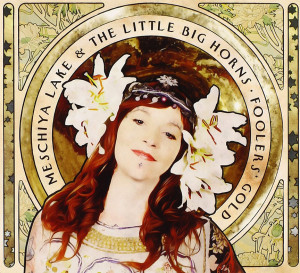 Joining Loose Marbles for street gigs in 2007 she was soon taking up the guitar and banjo and, with singer Erika Lewis, formed The Magnolia Beacon. After extensive touring she was soon back in New Orleans and getting serious. The Little Big Horns were born.

Fresh from being named Best Female Performer in the New Orleans Big Easy Music Awards, Meschiya and the band recorded their debut album Lucky Devil – a bold mix of jazz and blues – in 2011 to rave reviews.

She told My New Orleans “At the time I started in New Orleans, I thought it was unattainable — it was a dream back then to make a living at music. But, I knew this is what I wanted to do for the rest of my life.”

“Lucky Devil” was recorded on the fly with mobile gear; Fooler’s Gold is a studio album, crafted  at Word of Mouth studios and the Music Shed. It also includes five original songs which show the band’s versatility.  The storeyville aesthetic and that fabulous trad jazz voice still dominates but as nola.com says, the performances aren’t museum pieces.

All that’s needed now is the final push into the public eye, the way that Seasick Steve, another American maverick, was taken up by viewers of Jools Holland’s Later TV show in England. This here spot is more than hot, in fact, the joint is jumpin’. 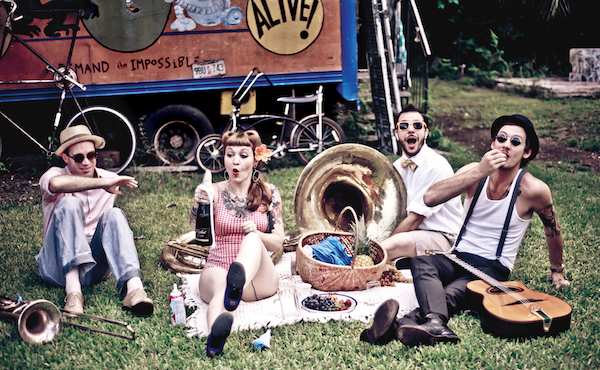 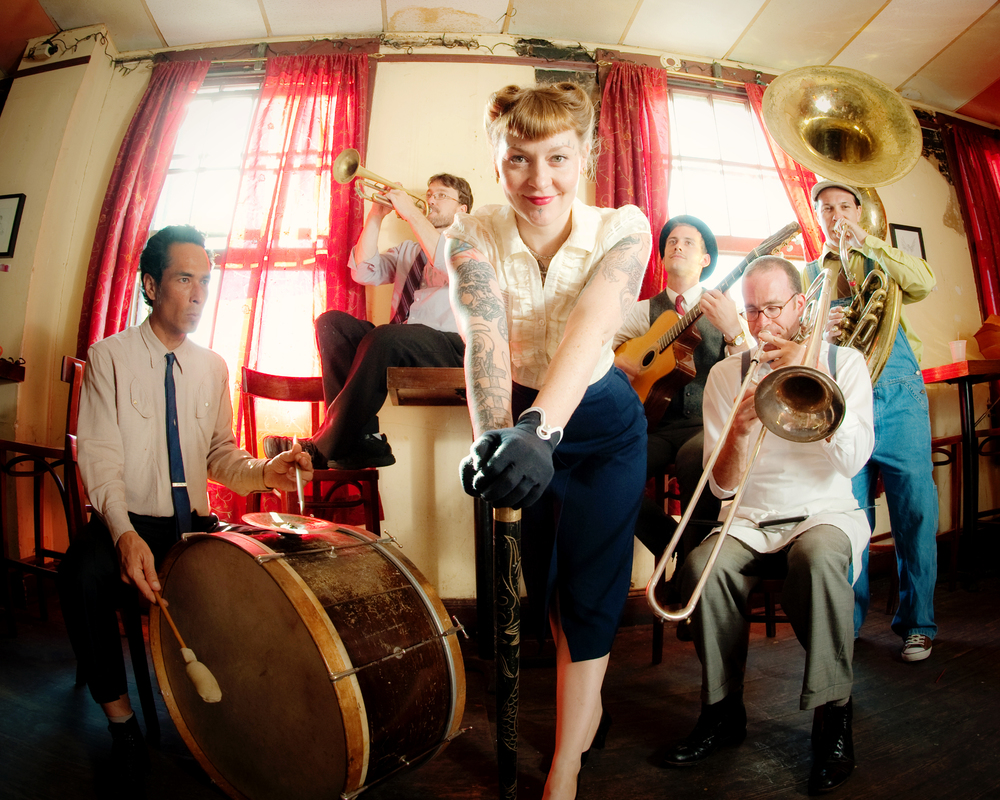 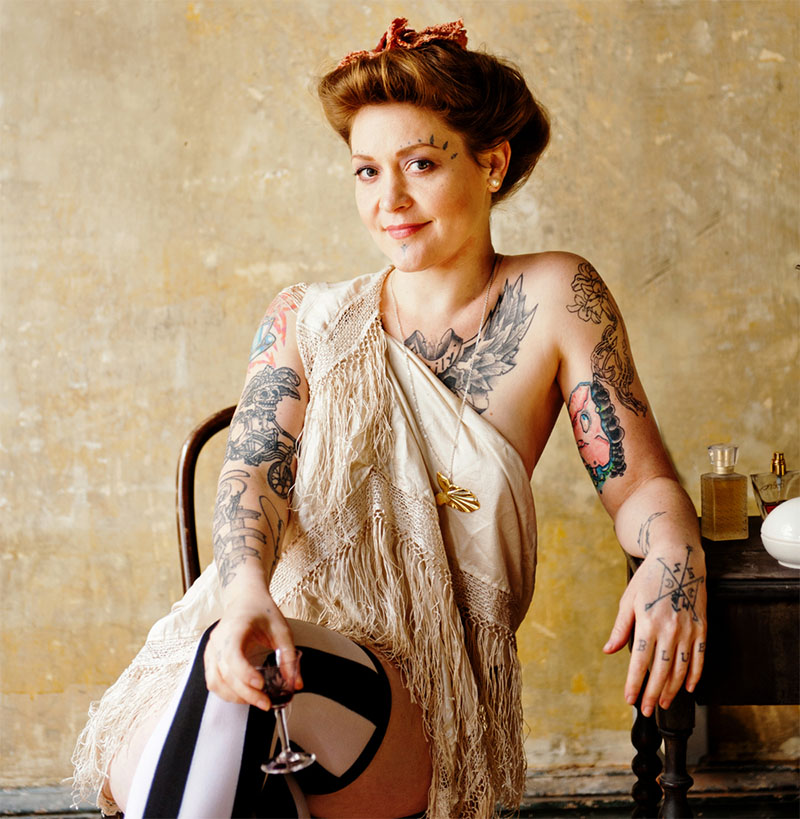