The Sisters: The curious lives of the Mitford Sisters

If you’ve never read this fascinating book about the Mitford sisters, then I highly recommend it. This isn’t a novel,it’s a biography, but it’s one of those ‘fact is stranger than fiction’ stories.

The six sisters were born into minor British aristocracy between 1904 and 1920. They had an unconventional upbringing and each girl developed their own strong personalities. And how very different they were.

You might, for example, have read about Unity Mitford who was undoubtedly Hitler’s girlfriend just before the Second World War. You’ll remember that the fact that her two countries, England and her adopted Germany, were at war made her shoot herself in the head. She survived but some believe that she have birth to the Fuhrer’s illegitimate child.

But that was just one sister.

All have amazingly colourful and diverse lives.In contrast to Unity, sister Jessica ran away to the Spanish Civil War with her boyfriend when she was still in her teens and in later life, became an avowed communist. Sister Deborah, on the other hand, married a member of the British aristocracy and became the chatelaine of its finest country house, Chatsworth, reviving its fortunes.

Pamela, who was actually a lesbian, married a millionaire for a short time and then became rather reclusive. Her elder sister Nancy didn’t have a successful marriage either and later fell in love with a complete womaniser who would not marry her. She was a novelist and lived most of her adult years in Paris.

My favourite sister though,if one can say such a thing, was Diana. She was the beauty of the family and abandoned her rich husband (a member of the Guinness brewing family) and her children for Oswald Mosley. Not only was he married, he was also the leader of the British Union of Fascists. Diana too had socialised with Hitler during the war. 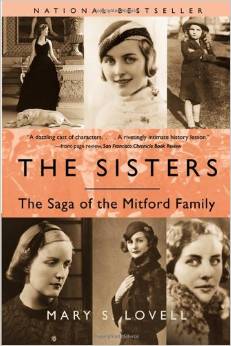 The pair were jailed for the duration of the Second World War because of their political beliefs but Sir Winston Churchill, a close friend of hers, made sure that life wasn’t too uncomfortable for the couple.

After the war, they went to live in Paris where Diana became a close friend and confidante of a certain Mrs Wallis Simpson – by this time, the Duchess of Windsor.

This is just a brief look into the lives of the most fascinating family you’re every likely to meet. It’s not just that the sisters had such strong personalities – they were also incredibly funny with wonderful senses of humour.

And that’s before we get to the other lively characters who populate this fascinating true story.

The book is available from Amazon and you can find out more using the link beneath the image. Most of the events in this book took place less than a hundred years ago but it’s like stepping into history, another time, another era.