From the 12th to 17th century, most English monarchs paid jesters and fools to amuse and entertain them at court. Jesters were the equivalent of stand-up comedians today – they would clown around and joke; make people laugh (or sneer) at their antics.

Royal fools could do these things too, but they often had a closer, more subtle relationship with a king or queen.

Royal fools fell into two groups. There were the intelligent, articulate, often eccentric characters, such as Will Somer, court fool to King Henry the V111, who was able to get close to Henry and proffer truths or opinions that others in the court were afraid or more diplomatic to say. Fools, like Somer, were also adept at word-play and in pricking the pomposities of others with their jests, ballads and riddles. This did not always make them popular with members of the court, and the fool had to ensure they stayed on the right side of the monarch for protection.

The second type of royal fool was ‘the innocent’. These were rather simple, open, trusting people; naive in their dealings with royalty – they often did not realise they should be afraid. Often the innocent fool would be able to dance uninhibitedly and sing in a fashion: trusting all, believing all.

As a result, their innocence was often valued by a King or Queen, who were surrounded at court by sycophants, schemers and plotters. The ‘innocent fool’ was regarded as being closer to God than other mortals, so was awarded special protection and given more latitude for their uninhibited behaviour.

Most court fools were men, but Queen Mary, daughter of Henry V111, had a female fool – almost certainly of the ‘innocent’ type, known in her Court as ‘Jane the Fool’.

Little is known of Jane’s life, but we know that she was an attendant to Princess Mary Tudor and became her official ‘fool’ on Mary’s accession to the throne in 1553.

Mary lavished care and attention on Jane, ordering fine cloth and gowns for her, paying for treatment when Jane was afflicted with skin infection, and including her in St Valentine’s Day celebrations (and rewarding the man who made Jane his special ‘valentine’ for the day).

Jane is also included in a painting: ‘The Family of Henry V111’ painted in 1545 and on display now at Hampton Court. Jane is shown peeking through the archway, left of the painting (Will Somers, the King’s Fool, is shown in the archway on the far right, with a monkey on his shoulder.)

It is likely that Jane’s innocent and spontaneous gaiety would have appealed to the serious-minded Queen and lightened the personal and constitutional troubles that oppressed her.

When Mary died, Jane disappears from the records. Perhaps one of Mary’s ladies-in-waiting or chamber women took her into care.

We can only hope so, as it is unlikely that Queen Elizabeth 1 would have had much affection for such a close associate of her much disliked half-sister. 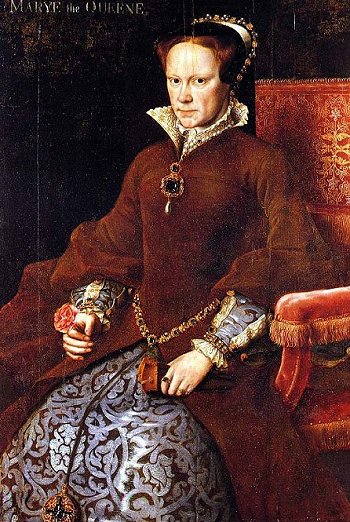