The Race for Paris: Review

Home » All books » The Race for Paris: Review

The Race for Paris: A novel by Meg Waite Clayton. 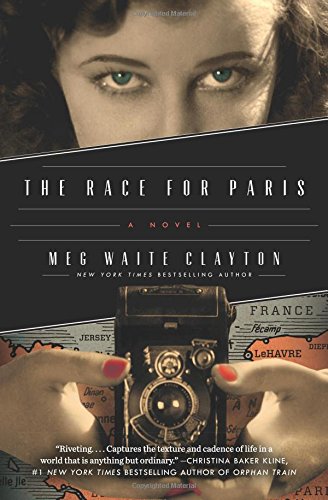 We’ve all seen photographs taken during the Second World War but have you ever stopped to wonder about the people who took them?

I have to admit that this had never crossed my mind until I read this based-on-the-facts novel. Some of the photographers were assigned by newspapers; others were official military personnel.

But another fact I was unaware of until I read this book is that some of the photographers and journalists were remarkably brave and determined women.

This book follows two of them, both from America,  who are originally assigned to a ‘safe’ billet – a field hospital. There, Olivia (Liv) and Jane have the job of reporting back to their respective newspapers in the USA, Liv taking photographs and Jane writing reports.

But both young women, Liv in particular, want to be where the action truly is. But women were not permitted to zones other than those to which they were assigned. Liv and Jane particularly want to be in Paris for its expected liberation but they have to defy their orders to do so. In essence, they have to go AWOL; go on the run.

Liv and Jane are determined to follow their own path, despite the extreme hardships and incredible dangers they face. They are lucky in that they meet up with Fletcher who becomes their self-appointed protector. He is an English military photographer who had once met Liv – he is friend of her husband’s. Yes, Liv is a married woman.

The three decide to travel together and each one has his or her own stories and reasons for doing the job they have decided to undertake. One of them has a secret that makes the mission even more perilous.

The book begins in the summer of 1944 and we travel with the three reporters through France to the chaos of newly liberated Paris. It is incredibly well-researched which gives the novel an unusual authenticity. The author willingly reveals that she was motivated and inspired to write the book because of the real women who undertook this dangerous but important work. Many, like the heroines of the novel, had to defy their orders, battle through red tape and avoid  detection by the military police to be the first to relay news back to Britain and America and, at the same time, demonstrate that being a woman was no handicap to them in their goals.

A fascinating and highly recommended read.