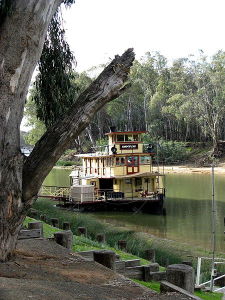 Dorothy Weil became a writer, poet, painter and award-winning documentary producer. But her early life held no clues as to what she would later achieve. She was brought up as a ‘river rat’.

She was born in 1930 and her first memories are of a three tiered steamboat.  Her father was employed as the captain of the Valley Queen and the family – Dorothy, her brother Jim and her parents – lived aboard during the winters. Oh, and their dog and cat.

When her book The River Home begins, the boat is trapped on a frozen Missouri River. She and her brother play on the boat accompanied by the noises of her father chopping wood for the pot-bellied stove and hacking the ice away from  the hull of the vessel.

In the summer, her father plied the riverboat up and down for passengers who would dance and gamble while the rest of the family had to leave their river home for a tiny apartment on land. That’s where they were in 1934 when Dorothy’s mother showed her and her brother Jim a newspaper cutting. The Valley Queen had hit a sandbar and was sinking.

The only person left aboard now was their father, true to maritime tradition. The family rushed to the river. The boat’s owners had sent men to remove everything they could from the craft before she sank. Their father was standing on the bank of the river watching the Queen sink.

Dorothy recalls that she glanced at her parents to see their reactions as the boat finally sank. Her mother had tears in her eyes but her father just said one word – ‘whew’.

Now their father was jobless and the family homeless.

Dorothy’s father died in 1980 at the age of eighty six. It was at his funeral that she realised that the had to tell the story of their lives. She embarked on a new journey of her own.

The result is the highly recommended and fascinating book you see on this page.