The three husbands of Clara Davis

Clara Davis and her three husbands

Don’t worry if you’ve never heard of Clara Davis – she wasn’t famous and she wasn’t a celebrity but I was drawn to her story because of the three men she loved and lost. She was just an ordinary girl but had such bad luck in the marital department.

She was the daughter of a gas superintendent from Dulwich and rather liked the idea of a career on the stage.

Her first husband was an auctioneer called Ralph Davis. Ralph was a fullten years younger than Clara,he was only twenty one but Clara probably told him she was younger. On her marriage certificate, she claimed to be twenty-seven. She put down no profession on the certificate  so it’s reasonable to assume that she was not working. Perhaps she was content believing her new husband would support her. However, the marriage was to end in tragedy  less than two years later.

In 1905, Ralph needed an operation. Whilst on the operating table he suffered a cardiac arrest. It seems that he was, unknown ,suffering from ‘fatty disease of the heart’.

Clara was now a window at the age of thirty three (or twenty nine, as she would prefer). 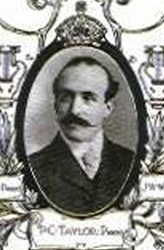 Returning to her theatrical aspirations, she then married a musician, just over a year after her first husband’s death.His name was Percy Taylor.

Percy was a cellist and was the same age as Clara. They married on 25 May, 1906.Again, her marriage certificate showed no profession so perhaps again,she was looking forward to being  the wife of an earning man.

In later years, the family story was that this was not a happy marriage. A old family photograph album shows photographs of Percy- and of Clara – but not a single image of the couple together. By the time of the 1911 census, Clara was living with her parents and described as an actress.

Percy however was plying his musician’s trade working largely on the huge ocean liners that travelled between Europe and the United States. As most people would have been, he was delighted when he got a new job, commencing in April 1912 – as the cellist in the band onboard the Titanic.

Like the other band members, Percy didn’t survive.Clara was a widow again.

By 1918, Clara had found a new husband. He was professional singer named Albert Pearce. His days of comparative fame in opera were over though and the couple toured the music halls in a double act. Curiously, her sister had married her second husband’s (Percy’s) brother.  In the 1920 the two sisters and their husbands bought a restaurant at Weston-super-Mare.  Minnie, Clara’s sister, had married George Taylor prior to the marriage between Clara and George Taylor so this is probably how Clara met her ill-fated musician.

Her marriage to Albert Pearce was though, at last, a happy one until his death in 1946.

However, it was the fate of her brother-in-law and restaurant business partner, George Taylor that curiously brought together the equally unusual deaths of her first and second husbands.

George was on a walking tour in Wales in 1955. One day, he went out and never returned. For several days, there was no news of him at all. Then a fisherman found his body in the sea, in echo of the death of his brother Percy on the Titanic. It was thought that he’d had a heart attack when walking on the beach – another echo, this time of Clara’s first husband – and that his body had been washed away.

His brother Percy’s body had never been found.