What would have happened if Edward VIII hadn’t abdicated for Wallis Simpson?

When King Edward VIII renounced the throne of England to marry his twice-divorced American mistress it undoubtedly had a bearing on world history. This is particularly true in the case of the early stages of the Second World War. This novel explores that very possibility.

Ever since he abdicated in 1935, historians have been wondering just how  – had the abdication not happened – world history could have been very different. Some even suspect that the affair between the couple could have been a deliberate ploy on the part of the British government in order to be rid of what they deemed to be an unsuitable king.

In this entertaining fictional account, the question of the abdication never cropped up because Wallis Simpson died as a result of surgery in 1936. (Was this an accident or was it deliberate?) The author proceeds with the story whereby Edward duly became king but as in real life, he was known to be a Nazi sympathiser.

If this seems unlikely then we have to remember that the horrors of the Nazi regime were still some years away and the party was seen as being just another government that was making improvements in the lives of its people. In fact, many British people, especially those from ‘society’ were pro-Nazi.

The British government though believed that Edward would negotiate with Hitler and this was not what they wanted.

Cleverly, the author blends fiction with fact in this novel. It’s also written in what sometimes is a light-hearted way and this makes the novel easy to read despite its serious subject. The antics of Cynthia (a fictional character) and of Beverley Nichols (a real person) are particularly amusing. Nichols’ fictitious diaries make up part of the book and are incredibly well written.

The ‘what if’ genre is incredibly popular today and with good reason. For example, what if Kennedy had lived? (This supposition has been greatly explored). The author of The Windsor Faction – D.J. Taylor – is an award-winning author and has meticulously researched the situation in the late nineteen thirties and the beginning of World War Two.

The world was a different place in those days and the author perfectly captures the extremes – from the high society lifestyle to the seedy underworld. It certainly provides us with a great read that makes the reader realoise the importance of that famous historical event. 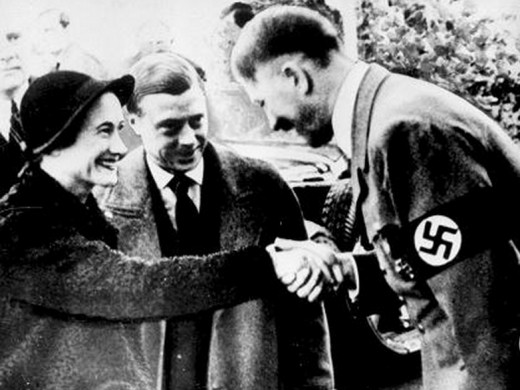 Today, most of us have at least basic Photoshop abilities and it’s easy to create fake photographs – but the one you see above is completely genuine. What’s more, all three people inthe photograph seem to be genuinely pleased about their meeting.

Historical information that has come to light since the Second World War certainly seems to indicate strongly that both Edward VIII and Mrs Simpson were definitely pro-Nazi. After all, Edward had many German relatives both by blood and by marriage.

Mrs Simpson was less forthcoming on the matter of the Nazis but many of her fellow Americans were pro-Nazi – the US ambassador to Britain of the day, for example – the father of John Fitzgerald Kennedy. It’s also known to be true that an American member of his staff was stealing documents fromthe embassy with the goal of undermining the British war effort. His name was Tyler Kent and he is one of the real characters who plays a part in the book.

Also in reality, there was a group known as the Right Club. Its members consisted of cabinet ministers, an American embassy official and members of the aristocracy who – in effect – shared Hitler’s anti-Semitic views.

A mix of real and imaginary characters

One of the most enjoyable aspects of this book is the way that real people and imaginary ones are skilfully mingled. But this doesn’t mean that you have to know about the history of Britain and the Second World War to enjoy it immensely. (There are also some characters who really existed but under various guises – fun).

Something that I love about the book is that real events and real people and woven into the story along with fictional characters and events. See reviews on Amazon.

This is genuine newsreel footage of the pair visiting Nazi Germany in 1937.It is said that Hitler lamented the fact that Edward abdicated as he felt that he would have been ‘of use’ to Germany during the Second World War.