How did Britain get its ‘reputation’ as being a place with less than perfect cuisine? It’s a myth that’s easy to explain and you only have to look at the chefs you featured below to see that great food is alive and well in the United Kingdom.

Britain has a very long history of fabulous food going back hundreds of years. Our first cookbook appeared in medieval days and the recipes are still delicious.

But here,I want to talk about some of the wonderful chefs who are working in the UK today. You’ll also see examples of their books. 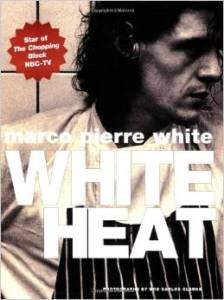 I think that Marco is my favourite British chef because he’s just so unconventional. (He’s also from Yorkshire like me so that’s an added attraction). He was known as the ‘rock star chef’ because of his general attitude, longish hair and wild demeanour.

But the stories of his wildness were greatly exaggerated. In fact, he was devoted to cooking and more or less lived in restaurant kitchens.

Asa young man, he had a gaunt and haggard look and this lead to an American newspaper writing that he was actually devoted to booze and drugs. Marco sued them – very successfully.

He won a Michelin star, then another, and then he became the youngest ever chef to be warded a total of three Michelin stars – pretty impressive. In his restaurants he concentrated in French food but is now dedicated to British cuisine.

But eventually. he was simply burnt out. He realised that he has no social life (he had a wife and children that he rarely saw) so gave up life in the kitchens. He said that he had two choices. He could continue (which wasn’t an option) or he could simply keep his name over the door, have other chefs cook for him and become a celebrity television chef. Who does that remind you of? 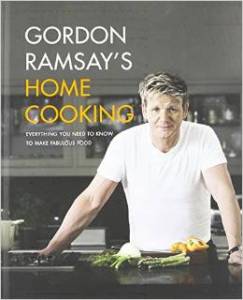 Gordon Ramsay’s Home Cooking: Everything You Need to Know to Make Fabulous Food

Gordon is probably the best-known British chef, certainly in America. This is because of his numerous television shows and his somewhat British liking for four-letter words.

He is also rather cute in a scarred and Scottish way.

But did you know who trained him? Marco Pierre White. And I rather suspect that he trained him in the language of the kitchen too. As they say, the f-word used the most in British restaurant kitchen isn’t ‘fork’.

The two were great friends at one time – a state of affairs that ended when Gordon attended Marco’s wedding and took along with him  television crew.

He started his career as a footballer – which is pretty far removed from the professional kitchen. But an injury when he was only nineteen put an end to his footballing career.

It was a sad day for him, no doubt, but a great one for British cuisine.

Like most British chefs today, he likes to encourage the use of fresh foods and local produce and he has many cookbooks in print. 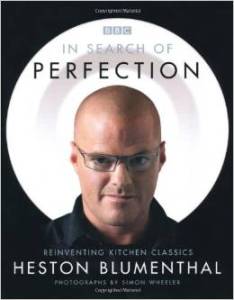 Heston has a very different background. Whereas the previous two chefs were born and brought up in the north, and had difficult childhoods. Heston is from the south of England and was from a more privileged home.

His approach to cuisine is very different too. Heston approaches his cooking almost like a scientific experiment. The book you see here – which is one of my favourites – takes him all over the world to find the absolutely correct way of creating dishes that have been Anglicised and Americanised over the years. So much so that they bear little resemblance to the original.

His quest for the perfect pizza is a typical example. Heston needs to know exactly where the best tomatoes are grown in Italy. He hunts down the perfect and authentic flour. AS he investigated he talked to dozens of people.

He experimented with special ovens, pizza stones and much, much more. The results were good but Heston demands nothing short of perfection.

He even gives his recipe for the perfect English fish and chips.

I have cooked pizza using his – very unusual method – and I have to say it’s perfectly delicious.