Travels With My Aunt: Graham Greene

Home » All books » Travels With My Aunt: Graham Greene

A great read: Travels With My Aunt.

Henry Pulling was a retired bank manager. He had enjoyed a good but rather dull life. He’d never married, but he had a comfortable home, his books and his increasing interest in cultivating dahlias in his garden. It was a boring life but he had no complaints. He rather imagined that he would spend his retirement peacefully, enjoying his quiet little lifestyle, until the day he drew his last breath.

His widowed, elderly mother had just died and Henry was attending her funeral.

There he met his late mother’s sister, his Aunt Augusta – a relative he hasn’t previously known. She was about as opposite to Henry as you can possibly imagine. That very day, Henry discovered that the woman he had just buried wasn’t really his birth mother and that his newly-found Aunt Augusta lived in a flat above a pub with a much younger pot smoking chap from Sierra Leone. These facts alone turn his world upside down. 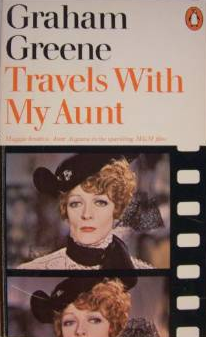 Now that Aunt Augusta has found her long-lost nephew she is determined that they shouldn’t lose touch again. She has travelled all over the world, known lots of people and had many lovers and as she and Henry start to get to know each other, she regales him with tales from her colourful and rather naughty life.

Before long, she insists that Henry travels with her as she does in search of the one man she truly loves – a swindling, former war criminal.

Henry does not enjoy the quiet, suburban life he had previously anticipated. But somehow, he just doesn’t mind in the least…

A film was made of the book which was disappointing in that it didn’t follow the book’s plot, but nevertheless enchanting because of Maggie Smith playing the part of Aunt Augusta.

The video below therefore, gives you some flavour of this wonderful book. I’ve read it time and time again.

You can read a further review here