Home » All entertainment » Under The Covers – Hey Mr. Tambourine Man

Andy Royston explores some his favourite cover versions and the stories behind them.

There’s a new thing happening, and it probably started with Bob Dylan. He gave the audience a new vocabulary, a new set of symbols to fit the feelings exploding in and around them. The Byrds take his words and put them in the framework of the beat, and make imperative the meaning of those words. Billy James, Sleeve notes –  Mr Tambourine Man, The Byrds.

The impact of Bob Dylan on the American music scene in the sixties is hard to overstate. Literary critics had gotten used to comparing pop culture song writers with ‘real’ poets, stressing the superiority of the latter. Dylan’s work was not exempt. John Updike wrote of “the impenetrable lyrics that Dylan composes as abundantly as poison ivy puts forth leaves”. 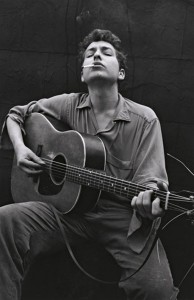 ‘With it’ writers though left all constraint behind, noting references to Steinbeck, Blake, Donne, Browning and George Elliot. Because Dylan was living on the lower east side he’s also cited alongside the beat poets – Ker0uac and Ginsberg particularly – in the critical rush to build up their idea of poet as prophet.

Dylan seemed uncomfortable with the label protest singer and aimed to keep his lyrics purposefully vague. This way his work reached across boundaries and time, with critics and fans alike looking for deeper meaning in each new song.

Mr. Tambourine Man has been saddled with an easy “drug song” reputation. The man puts the singer in a spell and takes him on a trip “upon your magic swirlin’ ship… cast your dancing spell my way, I promise to go under it.”

In liner notes to Biograph, Dylan mentions Fellini’s La Strada movie as a source for the song, with its cinematic “dark trees contrast with the lighted sky”. It could also be a song about writers block, using a tambourine man as a muse to find some inspiration.

Dylan includes a wonderful vision of paradise in the final verse.

Then take me disappearin’ through the smoke rings of my mind
Down the foggy ruins of time, far past the frozen leaves
The haunted, frightened trees, out to the windy beach
Far from the twisted reach of crazy sorrow

There are heavy contrasts between earth and paradise, where there are no truths outside the Gates of Eden.

There’s an unseen drive, a soaring motion to their sound that makes it compelling, almost hypnotic sometimes. And when you listen, hear through the sound to the joy that propels it. I hope you enjoy the record and, as Jim McGuinn says, I trust everything will turn out all right.” Billy James, Sleeve notes –  Mr Tambourine Man, The Byrds. 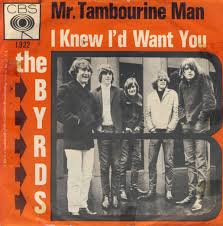 James Roger McGuinn’s ability to electrify Dylan’s music was exceptional, and his ability to interpret folk music goes back to his days as a student at Chicago’s Old Town School of Music where he learned six string banjo, and played as a sideman by local folk singing groups. His famous “jingle-jangle” guitar style of ringing arpeggios comes from his days as a banjo finger picker. See him in full banjo mode here with the Chad Mitchell Trio in ’62.

Relocating to Los Angeles (after a time writing songs for Bobby Darin in the Brill Building) McGuinn was to be found doing Beatles covers and giving rock style treatments to folk songs.

Fellow Byrds member David Crosby, who had also progressed through the  East Village folk scene, noticed what made the Beatles music special. “The notable difference was in the chord changes and progressions and I said “Aha. I know where that is. I know how to do that.” 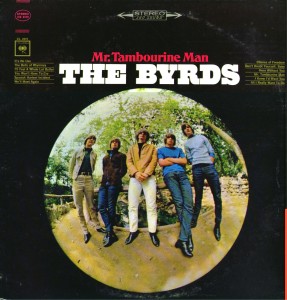 They were turned onto Mr. Tambourine Man through their early manager/ producer Jim Dickson, who had close ties with Bob Dylan’s management team led by Albert Grossman. They had heard a demo acetate disc of Dylan’s new song and with Grossman’s blessing took it into the studio. McGuinn, Crosby and Clark’s vocal harmonizing was seen as the band’s strong point, but back then they were augmented by session musicians, amongst them Leon Russell and Glen Campbell. McGuinn’s 12 string made the cut, with his Searchers style sound.

Dylan’s road manager Bob Neuwith recalled how the English rock and roll sound, which put the drums  and the beat back into the deal, has a sound that no-one, except perhaps The Byrds had anticipated.

“I distinctly remember hearing Mr. Tambourine Man in Albert Grossman’s office in New York City. Bob Dylan’s version was a couple of years old by then. Bob and I went to the office, cynical as usual and I said “put it on.” It was great because no one could figure out how anyone could cover any of Bob’s songs. We heard the record and cracked up. Bob loved it.”

“The ‘Ric’ [Rickenbacker guitar] by itself is kind of thuddy. It doesn’t ring. But if you add a compressor, you get that long sustain. To be honest, I found this by accident. The engineer, Ray Gerhardt, would run compressors on everything to protect his precious equipment from loud rock and roll. He compressed the heck out of my 12-string, and it sounded so great we decided to use it.  That’s how I got my ‘jingle-jangle’ tone. It’s really squashed down, but it jumps out from the radio.” Roger McGuinn

The Byrds success was sudden – in 1965 three of the biggest singles on the charts were by the Rolling Stones (Satisfaction), the Beatles (Yesterday) and The Byrds (Turn! Turn! Turn!), riding a crest of a new wave. Mr Tambourine Man went to number one in the singles charts in June 1965, quickly followed by the album of the same name.

Roger McGuinn’s an intellectual. He’s very smart and he’s a brilliant musiciam. He was smarter than any of us and he did understand what to do. And when we encountered the Dylan material he was a genius at translating it into something accessible to regular people. We were the first people to put good poetry on the radio. That was the Byrds. David Crosby – Long Time Gone

He’s not wrong. Just a quick listen to Big Star, Tom Petty and the Heartbreakers, R.E.M., The Smiths, The Bangles, or The Stone Roses and it’s clear that the jingle jangle morning still resounds. 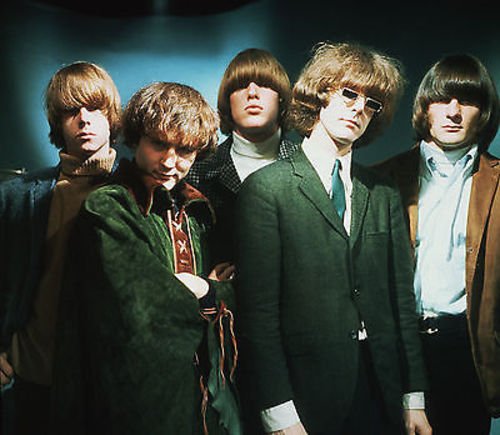