Who Was Violet Sharp?

Home » All society » Who Was Violet Sharp?

Violet Sharp and the kidnapping of the Lindbergh baby.

Who was Violet Sharp?

It was a famous and horrific crime. In 1932, the twenty-month-old son of one of the most famous men in American was kidnapped and an enormous ransom was demanded. The father of the infant, Charles Lindbergh, had come to the attention of the American public due to his exploits an an aviation pioneer.

The baby had been taken from his crib during the evening – while Charles and his wife Anne, plus a handful of servants – were also present in the house. The police had no clues to lead them to the perpetrator and Charles Lindbergh, a man accustomed to being in charge, ran the investigation to discover the kidnappers and to recover his son.

Six weeks after the child had been abducted, his body was found just a few miles from the Lindbergh home.

It wasn’t until 1934 that a man – a German immigrant named Bruno Richard Hauptmann – was arrested for the kidnapping and, after a lengthy court case, was executed for the crime. But he maintained his innocence throughout. He was a married man and his wife too claimed that Hauptmann was innocent – until the day she died.

But did Hauptmann act alone?

Or indeed, was he really the perpetrator? Once he had been arrested, the investigation didn’t continue. As far as the police (directed largely by Lindbergh) were concerned the kidnapper and murderer had been found. They had their man. But consider these:

Violet was a servant at Mrs Lindbergh’s parents’ home, Englewood. She was from England and was a lively girl who liked the company of men and enjoying herself. 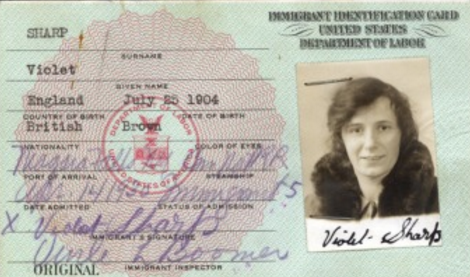 Yet shortly after the child had been abducted she died by her own hand.

Violet had hopes of marrying a fellow servant, Septimus Banks, the butler. However, he was rumoured to like his drink just a little too much and further rumours suggested that Violet had aborted his baby. On the night of the baby’s abduction, Violet was out with a man.

The other servants were cooperative but Violet was arrogant and contradicted herself. She renounced the cinema story and said that she had been at a local speakeasy on the night of the kidnapping. Needless to say, the police were suspicious.

They suspected that the kidnapper had received inside information and now that Violet had finished her relationship with Banks, her marriage prospects were nil. A handsome cash bonus for helping the kidnappers would have helped her escape from the life of a servant. She was interviewed again but this raised more questions than it did answers.

By the end of May, when the ransom had been paid and the child had been found dead, they called her in for questioning again. They were astonished by her appearance. She had been ill and the investigating officers said that it seemed that she had lost forty pounds in weight since her last interview a couple of months previously.

The police had now discovered that she had had relationships – of an intimate nature – with at least five local men. Once again she changed her story but her demeanor was strange. The arrogance was gone and now she was tearful and hysterical.

Her doctor was called and when he arrived he found that Violet had collapsed. The doctor demanded that there was to be no more questioning. The police agreed but said that they would want to see Violet again on the following day. Violet left the room but as she did, winked at the police secretary.

Violet decided to take matters into her own hands

She returned to Englewood. She went to see her former lover, the butler Banks, but he wanted nothing to do with her. She went to the servants’ quarters and to her room. There she drank silver polish – it contained cyanide. She staggered down the stairs and died in the butler’s pantry.

This was one theory. She certainly wanted to escape from the drudgery of her servant work. She was twenty nine and it seemed as though marriage had passed her by. She had a poor reputation because of her liaisons with men. Money earned by helping a kidnapper would be an easy way out. She could start a new life.

She was certainly one of the very few people who knew that the child would be at Hopewell that night, despite the fact that the visit had been deemed unlikely because of the child having a cold. She also knew the layout of the house and the location of the nursery.

It was later discovered that Hauptmann, although married, was happy to dally with other women and Violet was also known for her liaisons. Could the two have been lovers as well as accomplices?

But there was another possibility that was even more horrifying

It’s only in relatively recent years that another theory about the Lindbergh baby kidnapping has come to light. This theory is has its roots on the following facts:

This led theorists to believe that Lindbergh himself had arranged the kidnapping.

Taking the three points above:

Therefore, some theorists have concluded that  Charles Lindbergh arranged for the kidnapping of his own child. They do NOT suggest that he intended the baby to be murdered. Simply that he thought that the child was physically inferior and should be brought up elsewhere.

Another fact to take into consideration is that his wife, Anne, was in the early stages of her second pregnancy at the time of the kidnapping. Did  Lindbergh see this as being an ideal time as he and his wife now had the opportunity to create a second ‘more appropriate’ child?