The Lives and Loves of Violette Morris

Home » All books » The Lives and Loves of Violette Morris

The curious life of Violette Morris 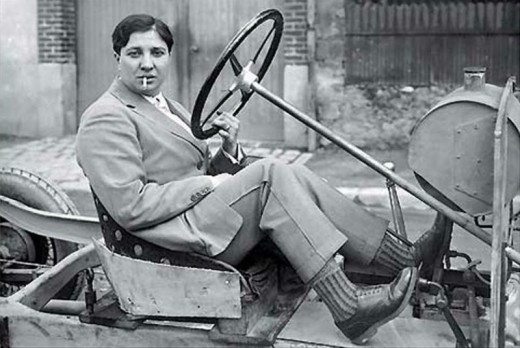 See this chap here? Well actually, this is Violette Morris; not a chap after all but a Frenchwoman who was born in 1893.

She rose to fame as a sportswoman, excelling in those sports that require strength and power such as shot put and javelin.

She was also keen on boxing, soccer  and, as you can see in the photograph here, motor racing.

Violette wasn’t just a tomboy, she was a confirmed lesbian.

The only use she had for men was as competitors. She was fond of saying that whatever a man could do, she could better it.

And in many circumstances she was correct. 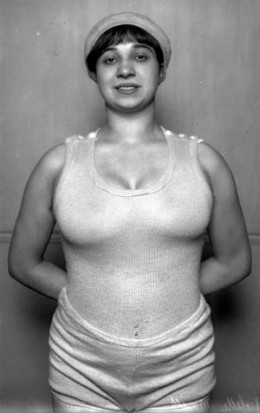 But hers was a strange life.

If you compare the two photographs on this page you’ll notice that on the one to the left, there are two very prominent features.

However, these are absent in the photograph at the top of the page simply because Violette believed that they got in the way – particularly when she was competing in motorsport – so she had the blighters surgically removed.

Her way of life was of no shame to her. She lived as a man and made no secret of the fact that her lovers were girls. This was terribly shocking for those days and despite her sporting achievements, she was ostracised by the French sports authorities.

Nevertheless, she competed in the 1936 Berlin Olympics – she was personally invited by Hitler himself. Why? Because by this time she had been recruited into the German Secret Service – a branch of the SS.

When the German occupied Paris in the earlier stages of the Second World War, she was invaluable to them.

As a strong, powerful and formidable-looking character she was perfect as an interrogator. She probably enjoyed it greatly.

She was killed in an ambush in April 1944 when the car she was travelling in was riddled with gunshots. 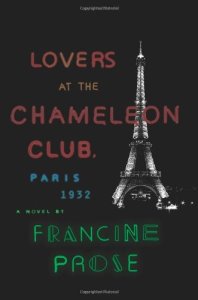 Lovers at the Chameleon Club, Paris 1932: A Novel

The book you see here is based on the life of Violette Morris.

The author says that she originally planned to write a factual biography but realised that the creative license she would have in fictionalising the book meant that other characters could be introduced and dialogue created to help set the scene.

Therefore this is not strictly a biography of Violette but is largely- very largely –  based on her life and her story.

Click the link below the image to see more about the book at Amazon.