While My Sitar Gently Weeps

Home » All entertainment » While My Sitar Gently Weeps 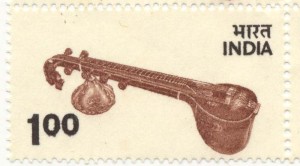 It was February 1965 and the London R&B band Yardbirds had convened at a recording studio to record a follow up song to their smash hit For Your Love. The idea was to open the song – Heart Full of Soul – with a sitar riff and they’d recruited an authentic player from a local Indian restaurant to do the honors. Journalist Penny Valentine recalled “Apparently the man, a highly proficient classical musician who had never worked with a pop group before, spent the entire session saying, according to Keith Relf, “Oh dear me, I’ll get it in a minute.” He didn’t.”

The recording studios of the day had severe engineering limitations, and it proved very difficult to get a full, clear sound from this delicate classical instrument.Sitar players had been playing with jazz musicians since the fifties, so it was only natural that some of the jazz-trained players would try to introduce these sounds into the pop arena.

Their new guitarist, Jeff Beck, eventually resorted to a fuzztone sound to imitate the sitar sound. Jeff was amongst the first London guitarists to use fuzztone pedals (as opposed to a busted speaker cone – the technique used by fuzztone pioneers The Ventures on tracks like this one.), it was highly likely he’d borrowed the pedal from his friend, the session musician Jimmy Page who was one of the few London-based guitarists in possession of a Maestro Fuzz-Tone pedal from the US. The opening riff was an instant classic and the solo later in the song lays down the blueprint for the psychedelic sounds later in the decade.

Oddly enough, the Yardbirds touring headliners, The Kinks were trying much the same thing that summer. Their song See My Friends is steeped in Indian influences. Inspiration for the song came from a stopover in Bombay during The Kinks’ 1965 Asian tour, where the jetlagged Davies encountered fishermen singing on their way to their morning work. It certainly was the first Western rock song to integrate Indian raga sounds, but they too had trouble using Indian instruments in the studio so Dave Davies approximated the tambura drone sound on his guitar by double-tracking it.

Across town another guitarist was being turned on to Indian music. The Beatles’ George Harrison had first encountered a sitar during the filming of Help!, in a restaurant scene filmed at Twickenham Studios on 5 and 6 April 1965.

Interestingly the soundtrack to the movie Help! includes the first sitar on a Beatles album. The Indian Restaurant scene had a medley of Beatles hits played Indian style in the background. It’s true. I’m not making this up!  It came out on the soundtrack album Help!, but the Beatles had no hand in its recording. 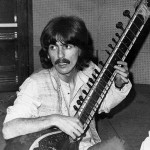 “I went and bought a sitar from a little shop at the top of Oxford Street called Indiacraft – it stocked little carvings, and incense. It was a real crummy-quality one, actually, but I bought it and mucked about with it a bit. Anyway, we were at the point where we’d recorded the Norwegian Wood backing track and it needed something. We would usually start looking through the cupboard to see if we could come up with something, a new sound, and I picked the sitar up – it was just lying around; I hadn’t really figured out what to do with it. It was quite spontaneous: I found the notes that played the lick. It fitted and it worked.” George Harrison

John Lennon had been working on Norweigan Wood since a skiing trip in St. Moritz. It was a kind of confession of an affair he’d been having back in London. Not long after the Beatles shared a bill with the Yardbirds the month Heart Full Of Soul was released, so would have been well aware of the Indian influence on their music.

The Beatles expanded their use of the instrument on subsequent songs, like Love You To (released the following year), Tomorrow Never Knows, Within You Without You, The Inner Light, and Across The Universe. The superior recording facilities at Abbey Road really making a difference, as the difficulties faced by the Yardbirds and The Kinks were easily overcome.

Thanks to the skills of Brian Jones The Rolling Stones put the instrument to good use in their song Paint It Black – features a tamboura too. Brian had had a history with the Sitar, but hadn’t been inspired to use it on a record until Harihar Rao (Ravi Shankar’s senior disciple) just happened to walk into the studio with one. THere were inevitable accusations of the Stones simply copying the sound George Harrison made in Norwegian Wood. 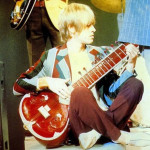 What utter rubbish. You might as well say that we copy all the other groups by playing guitar. Also, everyone asks if it’s going to be the new trend. Well, personally, I wouldn’t like it to be. You don’t have to get that weird Indian sound from a sitar. Take Norwegian Wood. Atmospherially, it’s my favourite track by the Beatles. George made simple use of the sitar and it was very effective. BRIAN JONES

Into 1966 the sitar really was the star.  The Monkees This Just Doesn’t Seem To Be My Day” featured one. The Box Tops would use an electric sitar on “Cry Like A Baby”, as would the Lemon Pipers on “Green Tambourine” – the latter played by the instrument’s inventor Vinnie Bell. One the electric hit the market,  with a more familiar fret arrangement for a guitarist to play, the sound came to dominate the late sixties pop scene.

Eric Burdon and the Animals – Monterey 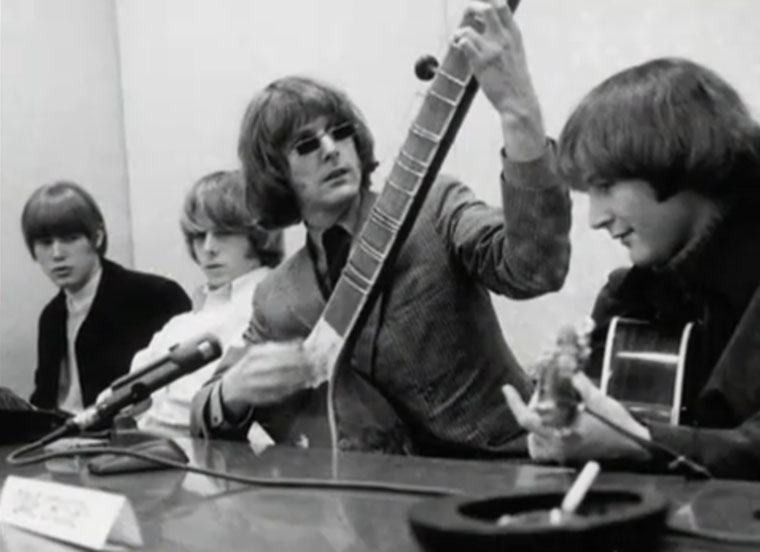 Roger McGuinn and the Byrds at a “raga rock” press conference in March 1966.