Little Farah, a black kitten, was shot by someone using an air-rifle. The likelihood is that she was shot when playing in her owner’s garden. She died  a painful death. 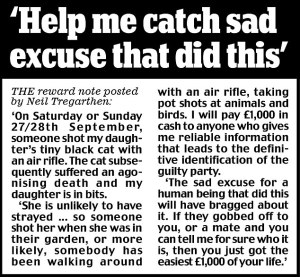 She belonged to a young English medical student and the girl’s father, Neil Tregarthen, promised to do what he could to find out who was responsible. He had to, because the police said there was nothing they could do. Yet it’s illegal in the UK (and in every civilised country, I would imagine) to go around with a gun killing domestic pets.

So Neil printed handbills offering £1,000 to anyone who had any information. More than this, he employed  firm of private investigators – at a cost of £10,000 to investigate the shooting. As he says, he is lucky that he has the financial means to do so. But he feels strongly that people shouldn’t be out in the city streets killing animals.

As he says, the kitten could have belonged to an elderly widow whose heart would have been broken. Or to young children who wouldn’t understand the disappearance of their much loved pet. As it was, his own daughter was very upset when her kitten died in such a pointless and cruel way.

Yet some people are strongly criticising his actions

They say that he was ‘taking the law into his own hands’. They are saying that his actions are ‘typical’ of  rich man who thinks he can buy whatever he wants. Some are saying that he should let the police be the best judges because that’s their job.

Others applaud his investigations

It’s true that we can’t have people marauding the streets with air-rifles taking pot shotsat living things.It could be a cat today and a child tomorrow. It’s also true that to many people, their pets are members of the family. Neil had the money and surely he could spend it the way he wanted to?

Who did kill Farah the kitten?

The firm of private investigators worked on the case for six weeks. They compiled a dossier and identified four suspects. They also had a witness who was prepared to give evidence. This was then presented to the police who still said there was nothing they could do. Were they undermanned? Overworked? They say not. They say the reason is that there wasn’t enough hard evidence to go on. This is such a shame. The killing of a pet many not seem important to the police force (although I’m sure that’s not the case with individual officers who I’m sure were sympathetic) but it seems to be more important than prosecuting and fining people for parking or minor traffic offenses.

A gunman is a gunman and who knows who the next victim will be?