Who Was Blanche Barrow?

Home » All society » Who Was Blanche Barrow?

Who was Blanche Barrow?

The image you see below gives the game away. As you can see, in 1933 Blanche Barrow was in police custody.  The mugshot also shows that she was twenty two years old and charged with murder. 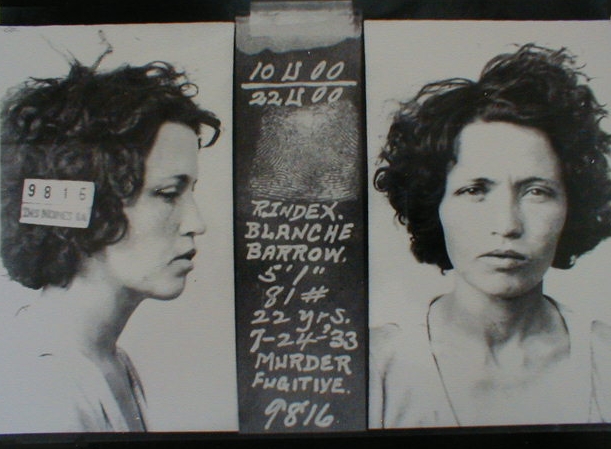 Blanche had been born as Blanche Caldwell on 1st January, 1911. Her mother was just sixteen.

When Blanche was only seventeen years old, she was married off to a much older man but left him shortly afterwards. She then met the love of her life, the twice-divorced Marvin Barrow. He had children from his previous marriage and he was a criminal. He was more commonly known as Buck Barrow and was the older brother of the infamous Clyde.

Blanche and Buck joined the Bonnie and Clyde gang

You’re probably familiar with the story of Bonnie and Clyde, maybe from the 1967 film of that name, but is it accurate? And what happened to Blanche and Buck?

Blanche had been injured when the gang’s car had been attacked and she lost the sight in one eye. Buck was severely injured and although they managed to escape and go on the run, they were soon captured. Injured again during the capture, Buck died on 29 July, 1933. Blanche claimed that she was only part of the gang because of her husband and was sentenced to a ten year jail term.

She served six, was released and led a law-abiding life until she died in 1988, aged seventy seven.

Years later a friend of Blanche’s, Esther Weiser (by then an elderly lady), was preparing to move to a new

apartment. Her son, who was helping her pack, found a large, old envelope. Esther had forgotten all about its existence.

It was a series of notebooks containing Blanche’s memories of the gang that she had written whilst in prison. Blanche had given them to Esther for safekeeping, many years previously.

This gave the world a much more accurate picture – a  genuine insider’s view – of the life and times of Bonnie and Clyde and the times in which they lived.