Home » All society » Who was Catalina de Erauso? 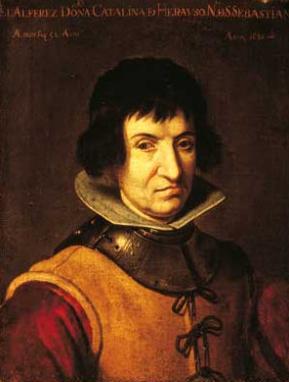 Catalina was born into a highly-ranked Basque family in 1585. Like many girls of her day,she was expected to live the cloistered life of a nun.

She entered the convent when she was just child.

She was desperately unhappy and determined to escape from the dreary future she saw before her. It was arranged that she should take her vows when she was fifteen. As the date approached, she became even more determined to leave the convent.

Her opportunity arrived. She saw that they keys to the convent gate had been left hanging on a nail. She knew that this might be the only chance she had.

She stole a little money, scissors and a reel of thread and slipped out of the convent gates.She had no recollection of the outside world. She couldn’t recall ever seeing a road before. She had no idea which way to turn. She took cover and spent three days transforming her nun’s habit into boy’s clothes.

She cut off her hair and on the third night – in her new disguise – set off hurrying along roads and lanes. She skirted around villages and settlements so she wouldn’t be spotted. She wanted to get as far away as possible from the convent.

Dressing as a boy was a common way for women to disguise themselves in those days – so much so that the Spanish government made cross-dressing punishable by death. This did not deter Catalina. She travelled through the country working as a labourer, doing odd jobs and working in stables.

Lieutenant Nun: Memoir of a Basque Transvestite in the New World

In 1605 she joined a ship that was headed for South America. She worked aboard as a cabin boy. Once she arrived at the ship’s destination, she jumped ship and joined a group of travellers who were heading for Peru.

Catalina was in her mid-twenties now and she could no longer passasa boy and get the sort of work she’d done previously. But maintaining her male disguise, she was trained as a swordsman.  She joined the Spanish army who had a garrison on the Chilean border and who were fighting the Araucanian Indians. She remained there for thirteen years.

After this, she and a few companions decided to travel to Argentina, across the mountains. Every one of her companions died in the cold, inhospitable mountains – Catalina was the only survivor.  Once in Argentina, she joined up as a soldier again.

During a battle – in approximately 1620 – she took refuge in a church. Here,she confessed her secret. She expected to be punished and prosecuted but felt relief that her story was now in the open. To her surprise, she wasn’t punished but given a pension from the Spanish army.

She was now seen as being something of  a hero so she decided that she would return to Spain. But she was bored. She was no longer accepted as a man now that everyone knew her secret. And women just thought she was downright weird. She couldn’t fit in to the conventional female life.

She decided to become a pilgrim and intended to travel to Rome. But when she got to France, her reputation had preceded her and she was arrested. She was set free but then became the victim of a robbery. She managed to make it to Rome where she had an audience with the pope. But now what?

She made her way back to South America. She could no longer work as a soldier and knew that she would not fit into the female lifestyle.

Her final role was that of a mule caravan driver, herding the animals between Mexico and South America.