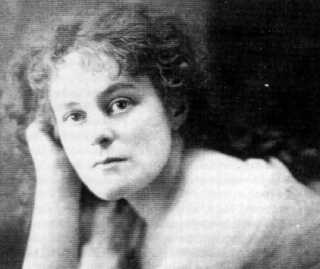 For those who have heard the name of Maud Gonne, they probably have an idea that she was an Irish political activist.

It’s true that she was pretty vocal in Irish politics but she was actually English, born in Surrey.

She had a curious career but she is probably remembered most for being:

The woman who had sex by her baby’s grave

She had the child in 1889 in Paris. The father was her older lover, Lucien Millevoye. Maud had been educated in Paris and when her father died, historians believe that she saw Millevoye as a father-substitute.

Shortly afterwards, she met Irish poet W B Yeats in London.This was the start of a strange relationship that was to last for fifty years. Yeats knew about her son, Georges, but Maud insisted that he was adopted. This wasn’t the case of course.

Two years later, the child died. It’s not known to this day exactly what the cause of death was although meningitis is now thought to be the most likely cause.

She became unnaturally interested in the subject of reincarnation. Yeats mixed with a variety of people and she would ask them their opinions about whether the dead returned in new bodies. She was obsessed. A writer George Russell, who was also a mystic, told her that reincarnation was certainly possible. Could the child be reincarnated she asked? Was it something she could initiate?

Russell said it was … if the parents followed certain procedures

The story moves now to a village outside Paris, Samois-sur-Seine.Maud had been renting a house there when the child had died and he had been buried in the churchyard there. This was no ordinary grave.Maud was relatively wealthy thanks to an inheritance from her father so she’d had a mausoleum in the form of a memorial chapel. The child was buried in the crypt beneath.

Maud and Millevoye’s relationship had ended after the death of the child but in late 1893, she located him and contacted him. She told him about what she had been advised to do in order to bring about the child’s reincarnation. Amazingly, Millevoye agreed to go ahead with the plan.

The couple went to the cemetery, descended the few steps down into the crypt and made love alongside the child’s coffin

Astonishingly, Maud became pregnant. On 6th August 1984 Maud gave birth to a daughter, Iseult. We can assume that Maud soon realised that the girl was not the reincarnation of the late Georges because Iseult was sent away to a convent to be educated. Maud didn’t refer to Iseult as her daughter, preferring to call he a ‘cousin’, a ‘niece’ or an adopted child.

There was never a good relationship between the two.

In this small town’s graveyard, the  chapel erected by Maud Gonne – and the crypt – still exists. No-one there now remembers the strange story of Maud and Millevoye trying to reincarnate the child.