Who were Charters and Caldicott

Home » All entertainment » Who were Charters and Caldicott

I don’t know about you, but when I’m watching a classic movie I’m always taken by the characters on the edge of the action. The more than curious bystander who gets caught up in the action almost accidentally.

Take Alfred Hitchcock’s classic take on Agatha Christie’s novel The Lady Vanishes. Two inept and veddy British cricket fans  are amongst passengers on a train out of the European country of Bandrika,  delayed due to an avalanche.  The last guests to book into an overcrowded inn they end up sleeping in the maid’s room.  Their names? Charters and Caldicott.  First names? No idea, old boy… 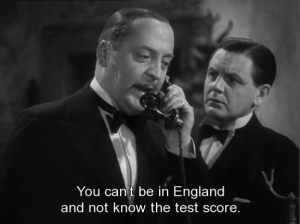 What made these duffers stand out is they were a kind of Brit you can still meet in expat bars the world over. You can be up a Swiss mountain, down a canyon in Crete or feeding monkeys in Bangladesh and they’ll be some chap in a blue Everton F.C. jersey delighted to meet a fellow Brit, as he’s wondering if Lukaku got one against United. Their attempts to follow how England’s cricket team were progressing provided such humorous light relief. And such sticklers for proper British behavior!

“Tell me, what’s happening to England?

Blowing a gale? No, l’m inquiring about the test match in Manchester.

You can’t be in England and not know the test score??”

Now who created these two I’m not sure. Certainly not Ethel Lina White, on whose book the screenplay is based. (Yes I thought it was Agatha Christie as well). I’d like to think it was Alfred Hitchcock himself, but it’s equally likely that these two were already becoming a fixture on the British music hall circuit and they, well, Hitched a ride on the train…

Their obliviousness to the growing drama around them is typical of the era, and one can’t help but think of the likes of Neville Chamberlain, and his very stiff upper lip attitude, stoic and ambivalent as Hitler’s Third Reich grew out of control.  Charters and Caldicott, though, sent in a few good bouncers when they realized that they were on a sticky wicket, and put in a good innings considering the batting odds.

“They can’t possibly do anything to us. We’re British subjects!

Basil Radford and Naunton Wayne (who played the undynamic duo) were so blooming popular that they made an encore in a second movie Night Train to Munich, also written by Launder and Gilliat. From there there were at least four more movies (and a few clear rip-offs) followed by a respectable career in radio.