Yes, William Grover was a racing driver and some motorsport historians will probably know his name because he was the winner of the inaugural Monte Carlo Grand Prix in 1929. But his life was much more fascinating than that last sentences implies. 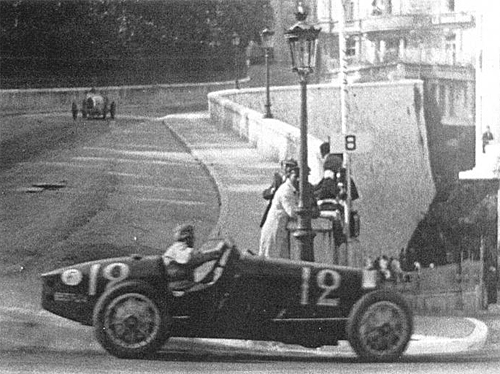 He was British, having had an English father and a British mother. It was evident that he had a huge interest in cars and mechanical engineering from his early boyhood days. Brought up in both France and England, he started racing motorbikes when he was far too young to legally do so. After the First World War the family moved to Monte Carlo.

He used the name of ‘W. Williams’ so that his parents wouldn’t learn of his racing exploits. Thus he later became know as William Grover Williams. Although he was from a wealthy family he started working in Paris as a chauffeur but this was no lowly position.

We might be able to assume that Orpen was growing tired of his mistress because rather than being annoyed by Yvonne’s daliances with William, they were handsomely paid off. With Orpen’s money behind them Yvonne and William were married in 1929.

By this time, William was racing cars and in the same year of his marriage, he won the first Monaco Grand Prix. He won narrowly – just beating a German driver in a Mercedes. (A fact that becomes interesting later).

But all too soon WW2 came along and the Nazi occupation of France began. William returned to England to join up. Because he was fluent in English and French he was recruited by the Special Operations Executive – an organisation set up by the government specifically to thwart the Nazi occupation in Europe. William soon became an active operative, taking on secret missions in occupied France.

He worked with two fellow racing drivers but the brother of one of them betrayed the trio of spies. William was arrested. He was beaten, starved and tortured and sent to a concentration camp. Here, he was executed by the Nazis in 1945.

For many years, there were rumours that he had survived the war. The best evidence for this was that a couple of years after the end of the war, a man called Georges Tambal moved in with William’s supposed widow Yvonne and lived with her until her death in 1973.

He was reported to be a mechanical genius, he had been born on the same day as Williams according to records and he bore scars which could have been the result of Nazi torture sessions. He had arrived to Yvonne’s French village from America. Records show that an SS officer had made a written statement saying that Williams had not been executed but had been relocated to America just after the war from M16 officers in Berlin.