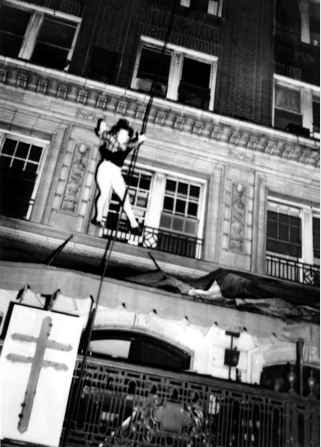 The Winecoff Fire Disaster of 1946.

During the early hours of 7th December, 1946, Arnold Hardy took an iconic and award-winning photograph that was to become a symbol of the worst hotel disaster in the United States.

Arnold was only twenty four years old and had just relocated to Atlanta. His great hobby was photography and to make ends meet, he was trying to get part-time work as a newspaper photographer.

His camera was not professional, he had no experience so therefore no-one was interested in employing him.

On that fateful evening, Arnold had a date and was late to return to his lodgings. It was about three in the morning – just as he was getting to bed – that he heard the sirens.

Using his initiative, he called the fire department, claimed to be a press photographer, and asked for details. He discovered that the Winecoff Hotel on nearby Peachtree Avenue was ablaze.

The hotel was extensively advertised as being ‘completely fireproof’. A later commentator remarked that this comment was akin to the Titanic being described as ‘unsinkable’.

The Winecoff Hotel had no vacancies that night; it was packed to capacity. There were several groups of teenagers in town for state meetings of service organisations. In addition, people had travelled to Atlanta for Christmas shopping.

Every one of the 195 rooms were occupied with the names of 280 people in the hotel register. There were also a few unregistered guests – people who had sneaked in to stay in their friends’ rooms.

Hardy was the first photographer to arrive at the blazing hotel. The fire had begun on the fourth or fifth floor but already, it was taking hold and firefighters were having a hard time controlling the fire and smoke that engulfed the fifteen-floor hotel. They simply didn’t have the equipment to tackle the higher parts of the building.

Their ladders only reached the seventh floor.

As guests were woken by the commotion, the flames and the acrid smoke, they realised that there were no systems in place to save them.There were no sprinklers, not even fire escapes. An opening in the roof of the hotel, which would have allowed at least some of the smoke to be released, was firmly closed.

To his horror, Hardy realised that the hotel occupants were trying to escape by tying flammable bedsheets together to form ropes. Some people were forced by the heat from their rooms and were hanging onto the window ledges by their fingertips. As he watched, the inevitable happened and people began to fall – or jump.

The amateur photographer had only five flashbulbs for his camera. One broke. He took three painfully tragic shots. Now having only one flashbulb, he looked up at the blazing building and saw a woman falling. He didn’t know whether she had jumped, or had been trying to escape using knotted bedsheets. But as she fell, he clicked the shutter and took his iconic photograph that was published all over the world to show the horror of the Winecoff Hotel fire.

The photograph of the woman, Daisy McCumber, was pronounced in the press as being ’the woman who hurled to her death’. In fact, she was seriously injured but her life was spared.

She had jumped from the eleventh floor. 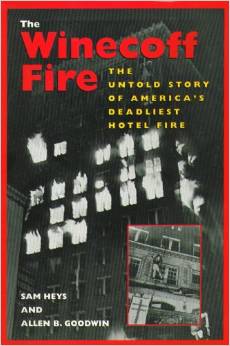 Daisy was one of the unregistered guests. Her friend was in town staying at the hotel and Daisy had joined her for the night.

Eyewitnesses believed that it was impossible for her to survive but she did; having extensive surgeries over several years. One of her legs was eventually amputated.

Later, Hardy was offered a photography job by one of the papers that had previously refused to employ him. He turned down the job offer. From that night on, he explained later in life, he only took photographs of his family and their vacations. The night of the Winecoff fire was a strong and enduring memory and he was no longer interested in photography.