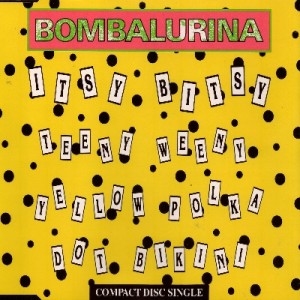 My colleague, Andy Royston, recently wrote an article about the music of Carole King and Gerry Goffin. He referred to the standard of music in 1960 until the time when the King-Goffin combo came up with Will You Still Love Me Tomorrow.

In fact, he referred to 1960 music as being ‘drivel’ and cited as an example, Itsy Bitsy Yellow Polka Dot Bikini. Now on the basis of quality music, I will admit that Bikini isn’t exactly the sort of material that would make it onto one of those ‘best songs’ lists.

But the song had a huge impact on the heavily-censored American society.

The bikini had been worn in Europe since the 1930s. This, it’s true, was a more discreet version of today’s and should really be described as a ‘two-piece bathing suit’. Navels were not exposed. But in 1946, French designer Louis Reard developed what we think of as the bikini today – showing that naughty, raunchy navel.  He named his creation after Bikini Atoll, the site of USA nuclear bomb testing. And, as he expected, it created almost as much controversy – if not more. 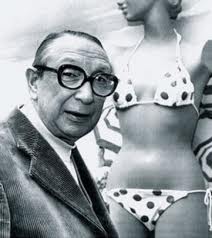 In some areas of Europe, particularly in staunch Catholic countries, some beaches banned women who were wearing these daring new swimsuits but they soon capitulated when they realised just how popular the bikini had become. But it was a different story in the United States and the bikini was roundly condemned in the media and by censorship organisations. It would be another twenty years before baring the navel would become mainstream in the disapproving US.

The song Yellow Polka Dot Bikini was the start of this revolution. It was released in June 1960 and tells the chirpy tale of a girl who was afraid to show herself wearing this new-to-America fashion. Indeed, the kitschy classic beach film Where the Boys Are, which was released in the December of the same year, had not a single belly button in sight.

This is unlike Europe. An example is the French film Manina, la fille sans voiles, starring Brigitte Bardot, filmed in 1952 where the bikini was not considered risqué. But in the States, belly buttons were definitely deemed unsuitable to be shown on the screen. You’ll remember (from re-runs of course) that the actress in the I Dream of Jeanie television show work her harem pants high enough at the waist to cover the offending belly button.

Sometimes, film makers got around the navel embargo by employing the device of sticking a jewel in there to conceal the offensive body part when actresses were dressed in Eastern-type clothing but eventually the more daring of them took the brave step of actually allowing the belly button to be seen. Even so, when posters for films were distributed showing this horror, the airbrush came out to make them vanish. Cher is credited with the honour of being the first woman to show her navel on television — but not until 1970.

It was thanks to the song that bikini sales grew

Musically, it might not have the merit of other songs of the day but it certainly played a huge part in ensuring that American women could have one of the same freedoms as women in Europe enjoyed.  The same can’t be said for the lyrics of the aforementioned Gerry Goffin. In Will You Still Love Me Tomorrow, the lyrics perpetuate the myth the guys in bed think only of the moment whereas girls think about the future and whether they will still be respected after ‘giving in’ to his demands. But worse was to come the following year.

In Take Good Care of my Baby the (male) singer is lamenting that his girlfriend has been ‘taken away’ by another chap. He sings:

Does ‘baby’ have no say in this? Apparently not, she can be sent around like a parcel. And more than likely by second-class male [sic].