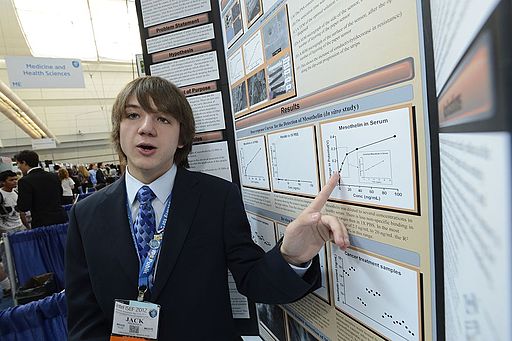 In our continuing series on some of our young inventors, we must include Jack Andraka.  At the age of 14, this young scientist came up with an idea to detect  pancreatic cancer.   At age 15, he had invented it.  The test is apparently also effective on lung cancer and ovarian cancer, and he hopes it will be made to detect others as well.

One of the problems with pancreatic cancer is that it is not obvious until it’s usually too late.  A very low percentage survive after its diagnosis.  To raise the chance of survival, it would be necessary to find its presence much earlier.

As the cancer forms in the body it does begin to produce a protein called mesothelin.  Jack’s mission was to discover a way to test for that protein.

His test, patent pending, is similar to a test strip for diabetes blood testing.  It’s far less expensive, the cost per test pennies compared to $800.  It will be easily produced and thus easily accessible.  Finally, it will show results in minutes.

To begin with, it took perseverance for this high school student to find anyone who would allow him to use the lab facilities at John Hopkins.  Then of course,  it took months of lab time, outside of school hours, to make it work.

His results, and his efforts were rewarded with the Intel International science fair’s top honor, along with the $100,000 prize.

His story is amazing, the process fascinating.  Imagine what he may accomplish in college at Stanford, and after?  His success has found him serving as keynote speaker at a number of events and appearing in interviews on National Geographic and 60 Minutes both.  I will eagerly follow his education and career.  As I understand it, he is getting ready for the next science fair.

When the winners were announced at Intel’s science fair…

You can see his interview here on  60 minutes.

Please note, our articles in this series are random, not meant to consider any one more important that the other.  Their young age, their amazing forward thinking, their discipline all are impressive.  It’s a pleasure and an encouragement to learn how many there are, some still children, that are already creating solutions to problems we face now.

The imagination, knowledge, and commitment of our youth is at its best in these young students.  I hope their stories spark interest in parents and children alike.  Amazing.  And, our future.

Breakthrough: How One Teen Innovator Is Changing the World

The book covers the back story of his life and his remarkable discovery. It’s a bestseller in its category, and will no doubt rise from there. Seems to me it would be a good gift and/or recommendation to parent, teacher and student alike.

Hopefully it will not only make it easier for teens to follow in his path, but also inspire many others to try, even through discouragement.