From the Author of “My Nazi Nemesis”

After reading and reviewing Rich DiSilvio’s latest novel, My Nazi Nemesis, we were pleased when the author wrote an article for us as well.  My review of his book can be found here, on Mystery Suspense Reviews.

It is always a pleasure to learn more about a writer and his process.  My Nazi Nemesis includes a wealth of history centered around the Auschwitz concentration camp, including details many readers will not know.

It is fascinating to see how an author uncovers those small yet important facts to include in a story, whether fiction or non fiction.

Here it is, for your reading enjoyment…

Thank you Merry for inviting me to post on your site.

You had presented me with a good question, namely, how I researched the war and have such a depth of knowledge about it.

I’ve been an avid reader for well over twenty years. In fact, since I primarily write thrillers, mysteries, and historical fiction these days, many readers ask me which novelists I like best, or have been influenced by the most. The shocker is ninety percent of what I read is nonfiction. I’ve devoured countless biographies, history books, and a myriad of other subjects, like art, music, architecture, politics, military leaders, and wars. Nonfiction not only quenches my craving for knowledge but also stimulates the creative juices for my novels.

My extensive research for my first book, The Winds of Time, which was a nonfictional account of Western civilization, took me five years to research and included chapters on WWII, Hitler, FDR, and Winston Churchill among many others. Beyond books, I’ve devoured countless magazines, film documentaries, and for info on the Holocaust, I visited the Holocaust museum and saw the horrid displays, photos, and videos, and spoke to survivors.

As readers have said, the brief scenes at Auschwitz in My Nazi Nemesis are vivid and disturbing, and I attribute that to immersing myself into the hellish pit of that despair and insanity that all these sources offered me. That dark chapter of history is so chilling that I feel it must be spoken of, because with radical Jihadists of today decapitating victims and even mutilating their own women, it is clear that genocides are not events of the past. We must remain cognizant and vigilant in order to confront these toxic viruses early on, rather than wait until the cancer metastasizes and becomes incurable.

In the novel, Veronika is shocked to learn what is really going on in these Nazi death camps and tries to understand not only the warped mindset and breakdown of morals of the villains, but also the complacency of the victims. These questions have plagued me, and countless historians and readers, ever since this genocide took place. It defies reason how so few major uprisings and escapes occurred during those four long and diabolical years. Yet Veronika courageously attempts to understand and answer these burning questions by confronting both prisoners and the deranged overlords.

I’ve always been fascinated by WWII ever since I was a young boy. I was captivated by movies like The Great Escape, Eye of the Needle, and even silly farces like Hogan’s Heroes. In my adult life I worked on projects such as the War Zone series, Killing Hitler, Operation Valkyrie, and comedies like Monty Python and Tracey Ullman. Oddly enough, My Nazi Nemesis features not only historical facts and dark moments, but, as you’ve found out, also moments of comic relief. Jack Goodwin, the protagonist, may be a CIA agent who is clever and cunning, but he is also a witty comedian that readers found charismatic and very memorable. Therefore, my love of history and sense of humor inevitably found a way into this tale.

Having friends and family who are police, FBI agents, and West Point grads and military people, I have the good fortune to hear war stories, and some of them are quite humorous. As Jack Goodwin stated in the novel, regarding his corny sense of humor at perilous times, “Well, I do feel that levity keeps you more relaxed and thinking clearly, because if you let panic reign, it clouds your judgment and could cost you your life.”

I strive to make my novels as real and authentic as possible, and despite the few dark chapters in My Nazi Nemesis, the lion’s share contains levity and relief. In this regard, being an aficionado of classical music, I subconsciously structure my novels akin to a symphony or symphonic poem; basically, they have serious expositions as well as movements that are calm or pastoral, tender or romantic, thought provoking or mystifying, capricious or comical, and then lead to a stirring finale. Therefore, since life fluctuates, so too must a good story.

So, even though My Nazi Nemesis is a dark thriller that takes place during WWII and the Cold War, the novel itself focuses on the human story lines, such as the father-daughter relationship of Jack and Eleanor, and the lives of Veronika, Peter, Betty, and Jack’s nemesis, Alois Richter. How each of their lives become intertwined and how each tackle the quagmires that arise are what carries this tale through the backdrops of war-torn Europe and the uneasy tensions of Cold War in the USA during the 1950s and 60s. And it is that human story that makes this novel less of a war story and more of a human saga about love, jealousy, hate, revenge and the quest for justice.

Thank you again, Merry, for inviting me, and I hope your readers will give My Nazi Nemesis a shot. Autographed copies are on sale at http://dvbooks.net/nazi or they can enter the giveaway there as well. The Kindle edition is currently on sale for only $2.99 at Amazon, or free on Kindle Unlimited. I welcome questions from all my readers, so to all of you, please feel free to visit my site and contact me. Thank you! 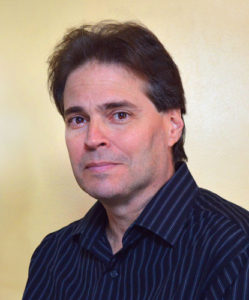 Rich DiSilvio is an author of suspenseful thrillers, historical fiction, and nonfiction. He has written articles and commentaries for magazines on various topics and four books.

DiSilvio’s novels include, My Nazi Nemesis, which is a suspenseful Cold War and WWII thriller; A Blazing Gilded Age, a searing work of historical fiction that features Teddy Roosevelt, J.P. Morgan and Mark Twain, and was praised by HISTORY/A+E; Liszt’s Dante Symphony, which is a thriller/mystery, replete with ciphers, spies, and a gripping tale that covers the rise of Hitler’s Nazi Germany from its Prussian roots; and DiSilvio’s celebrated magnum opus, The Winds of Time, which is a non-fictional tome that analyzes the titans who shaped Western civilization.

DiSilvio’s work in the entertainment industry includes projects for historical documentaries, including James Cameron’s The Lost Tomb of Jesus, Killing Hitler: The True Story of the Valkyrie Plot, The War Zone series, Return to Kirkuk, Operation Valkyrie, and cable TV shows and films such as Tracey Ullman’s State of the Union, Celebrity Mole, Monty Python: Almost the Truth, and many others.