In May 1949, a man who couldn’t get his passport renewed, another who was ill with influenza and an injured footballer were the luckiest men in Italy.

For they could not be on the trip when their colleagues in the Torino football team  all perished in a tragic air crash when they were on  their way back from playing a friendly match in Lisbon. 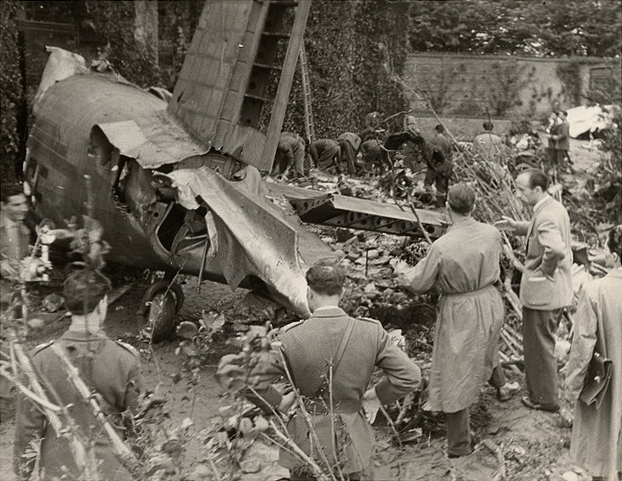 When the accident happened, on May 4th, there were thirty one people in the plane. Eighteen were football players, there were five football club officials, three journalists, four crew members anda man who was described as the organiser. There were no survivors.

Horrifically, the plane crashed into a wall of the Basilica of Superga, a huge and imposing church in Turin.

As they approached Turin, the weather was bad. There was a great deal of low cloud. Visibility was horrible, there were gusting winds and rain. It’s believed that the altimeter of the plane was faulty and that the crew believed that they were flying at a height of two thousand meters as they came in to land when in fact they were only a quarter of that distance from the ground and from tragedy. 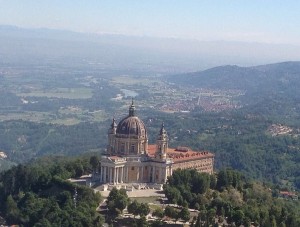 The basilica stands on a hill overlooking the fabulous local countryside as you can see from the photograph on the right. With a faulty altimeter and no visibility, the pilots were unaware that they were on a collision course with the magnificent building.

It’s thought that the pilot believed that the hill was to the right of the aircraft whereas in fact it was dead ahead. It’s believed that at the last minute he saw the hill loom in front of him but there was nothing he could do to avoid the impact.

The wall was never rebuilt or restored in honour of the men who died.

All the victims were Italian with the exception of the team’s coach, Leslie Lievesley from England. He had been a footballer in the UK, starting his career in the 2920s. After the Second World War he coached the Netherlands team and then moved to the Italian Torino team. His father, a miner, had also been a footballer as were his uncle, his two brothers and a cousin.

The plane crash is eerily reminiscent of  the Munich air disaster.

Find out more in the video below.