Home » All society » Atlas and Vulcana 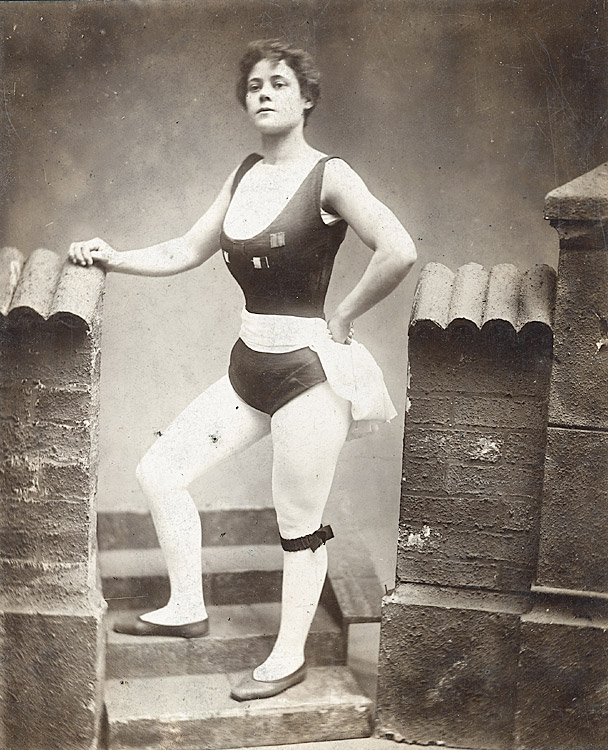 Vulcana was the stage name of a young woman from Wales. In the late nineteenth and early twentieth centuries, she performed in the music halls as a strong-woman.

She was born with the more likely name of Kate Williams in 1875. She was interested in acrobatics and fitness and her father, a local preacher, encouraged her to become fit and strong. When she was in her early teens she started attending a gym.

She soon started to perform at local amusements – much to the satisfaction of the men in the audience. It was not often that they could see young women wearing so few clothes in the Victorian era.

At the gym, her trainer – and the owner of the facility – was a man called William Roberts. Despite the fact that he was older, married and had children, Kate was just fifteen when she ran away with him.

Kate – or  Vulcana as she became – was only five feet four inches tall but tales of her strength are legendary.

She and William formed a double act. They were not only lovers, they performed together on stage as Atlas and Vulcana. They claimed to be brother and sister and together and they performed all over the world. The act was called The Atlas & Vulcana Society of Athletes.

Atlas and Vulcana – or William and Kate to use their real names – never married but they remained together and had six children.

Venus with Biceps: A Pictorial History of Muscular Women

Health and Fitness magazine referred to Kate as ‘a veritable Venus in form’.

Atlas and Vulcana’s children were brought up to be athletes too and were incorporated into their act.  The family settled down permanently in the UK in the nineteen twenties and finally retired from performing in 1932.

Seven years later Vulcana was knocked down by a car in London. Although she survived for some time, the accident resulted in permanent brain damage.

Are you descended from Atlas and Vulcana?

Having had six children, it’s known that there are people alive today who are descended from the couple – are you one of them? It would be wonderful to enhance this article and bring it up to date with more details. Email us if you have further information.