Motorsport is still very dangerous but in times gone by, racing drivers faced situations that thankfully couldn’t happen today. In the early post-war era, it was almost accepted that half the drivers in Formula One wouldn’t survive the season.

But one of the most horrific accidents happened in 1973 at the Dutch Grand Prix at Zandvoort. Roger Williamson’s crash was the seventh fatal accident at the circuit.

The Dutch Grand Prix was Williamson’s second Formula One race, He had made his debut just two weeks before at the British GP at Silverstone. He was twenty five years old.

No-one knows to this day what caused the crash – it took place on the eighth lap – but a deflated tyre is the most likely explanation. The car flipped and proceeded also the track which caused it to catch fire. It’s said that the accident itself would not have killed the driver. But he was trapped under the blaze.

But the fire was a fatal one

Fellow British driver, David Purley, realised that his colleague and friend was still in the blazing car. He stopped his own car, ran to the scene and tried in vain to righten the car and get Williamson out. Although there were marshals on the scene, they were not wearing fireproof suits and couldn’t help.

David Purley noticed that there was a marshal with a fire extinguisher on the other side of the track. He ran to grab it and returned to the car but his efforts were ineffective against the raging blaze.

No-one else realised that Williamson was in the car

The race wasn’t stopped but yellow flags informed the rest of the field to be cautious. Drivers passing the scene of the accident assumed that David Purley had been the driver of the crashed car, that he had escaped and was trying to save the car from being completely destroyed. No-one realised that Williamson was still in the blazing vehicle.

In the commentary box, the announcers thought exactly the same thing. You can see the accident and the aftermath in the video below. You can see David Purley’s pain and frustration when he realised that he couldn’t save his friend and that no-one was there to help him do so. 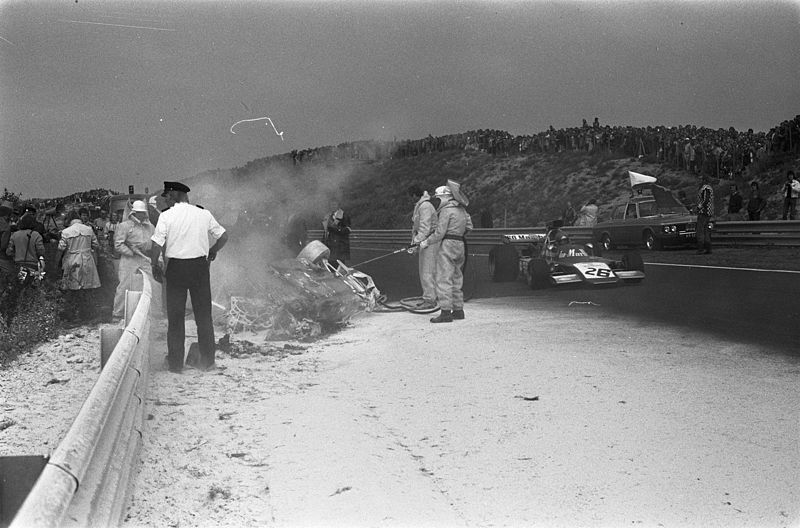 Afraid of an explosion

It’s likely that the few people who were in the immediate area feared that the full fuel tank – bearing in mind that this was only the eighth lap – would explode. And in those days it was a real possibility. That makes the actions of David Purley even more heroic – he could have easily been killed himself. David Purley later said that he had been able to hear Williamson screaming for help.

The emergency truck took eight minutes to arrive. Of course, by that time it was too late.

See the video below:

During the commentary, the announcer refers to ‘the other accident’. That too involved a British driver -Piers Courage – and his car also was engulfed in flames. It happened three years previously at the 1970 Dutch Grand Prix.

It had happened at exactly the same spot.

It’s thought that Piers was either killed or knocked unconscious on impact.

What happened to David Purley?

David Purley was awarded the George Medal for his bravery when trying to rescue Roger Williams from the blazing car. 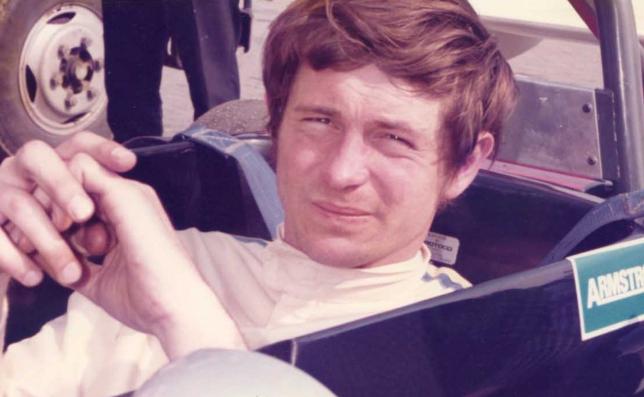 The Dutch Grand Prix was more or less the end of his Formula One career. (And if you’ve watched the video above, you’ll understand why). He did drive in other formulae however. He took part in the British Grand Prix the following year and then tried to resume his career in 1977. But at the British Grand Prix he had an accident in which he suffered – and survived -the highest g-forces a human being had ever been subjected to. This ‘record’ remained until 2003.

But he decided to give up motorsport altogether. He embarked on a new career in aviation – to be exact, in aerobatics. On July 2nd, 1985, his biplane crashed into the English Channel. David Purley did not survive. He was forty years old.