A Fine Year For Murder, By Lauren Carr, A Review

Home » All books » A Fine Year For Murder, By Lauren Carr, A Review

And “A Fine Year for Murder” It Is

What fun it is to be back with Jessica Faraday and Murphy Thornton. The newlyweds in Lauren Carr’s newest series, The Thorny Rose Mysteries, are a hit with fans!  This time Jessica and Murphy will find their still new relationship tested as violence from the past invades their present.

The Past: As the book begins, a young girl is hiding, cowering in terror.  Another is screaming.

Present Day:  When the body of a young woman is found, Jessica’s night terrors begin. Nightmares can be all to realistic, but in this case are the dreams bringing light to repressed memories?

The nightmares intensify when investigative reporter, Dallas Walker, begins to look back at a cold case, a horrific crime that occurred in the small town of Pine Ridge.   Revelations draw Murphy and Jessica there to learn what happened decades ago. With every memory that returns, Jessica grows more determined to remember everything.  The closer they get to answers, the more bodies turn up.  Even with Murphy’s skills, the two of them might just be next.

You’ll find murder as always—many of them—but there is much more.  Who is the strange woman in white?  What is the hotelier hiding?  Lauren is a master of weaving together multiple plots into one intriguing, twisting mystery.  Always plenty of solid suspects too deserving of investigation.  She  will have you scratching your head, right up until the end and the big reveal.

Also appearing in A Fine Year for Murder is Tristan, Jessica’s brother,  and the ‘Virtual Butler.’  That would be Nigel, a computer entity that helps run the Thornton household, including giving them reminders, directions, aid in the investigations, and the occasional sarcastic remark. He is a clever and entertaining addition, along with family plethora of pets.<

The story includes the lessons of trust, of letting go and growing up.  Good ideas, well written into the story.  It’s a treat to see the newlywed’s relationship grow and strengthen especially during the trouble they face.

A delight in each of Lauren’s books is their overlap with her other series.  Jessica is Mac faraday’s daughter (The Mac Faraday series).  Murphy, Josh Thornton’s son (The Lovers in Crime Series).  A few  of them show up nearly every time in the other series.  Not only do we have new mysteries and personalities to enjoy, but we also get to check in on the other characters at the same time.  Ms. Carr is very effective at connecting them.

We are delighted to see Lauren Carr’s novels are now available in audiobook as well!  I was provided this book in audio as part of the iRead Book Tour for A Fine Year for Murder.  The narrator, C.J. McAllister, is terrific.  He reads at a normal, natural pace, at the same time varying his voice for the variety of characters. He puts just the right amount of excitement into the narrating, just right to keep us attuned to his reading, without being over the top with drama.  Here is a sample, if you would like to hear for yourself.

Grab a copy in whichever format you prefer. You will enjoy the story and the characters.  If you like to start a series at the beginning, do check out all of Lauren Carr’s series.  The first in the Thorny Rose mysteries is Kill and Run.  You will enjoy connecting with  the pair from the start.   Highly Recommended! 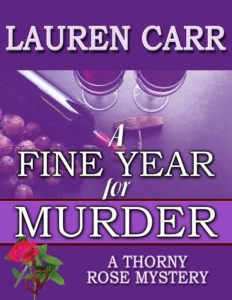 Book Description for A FINE YEAR FOR MURDER:

After months of marital bliss, Jessica Faraday and Murphy Thornton are still discovering and adjusting to their life together. Settled in their new home, everything appears to be perfect … except in the middle of the night when, in darkest shadows of her subconscious, a deep secret from Jessica’s past creeps to the surface to make her strike out at Murphy.

When investigative journalist Dallas Walker tells the couple about her latest case, known as the Pine Bridge Massacre, they realize Jessica may have witnessed the murder of a family living near a winery owned by distant relatives she was visiting and suppressed the memory.

Determined to uncover the truth and find justice for the murder victims, Jessica and Murphy return to the scene of the crime with Dallas Walker, a spunky bull-headed Texan. Can this family reunion bring closure for a community touched by tragedy or will this prickly get-together bring an end to the Thorny Rose couple?

Book Trailer for A FINE YEAR FOR MURDER:

Book Description for KILL AND RUN:

Five women with seemingly nothing in common are found brutally murdered in a townhome outside Washington, DC. Among the many questions surrounding the massacre is what had brought these apparent strangers together only to be killed.

Taking on his first official murder case, Lieutenant Murphy Thornton, USN, believes that if he can uncover the thread connecting the victims, then he can find their murderer.

The case takes an unexpected turn when Murphy discovers that one of the victims has a connection to his stepmother, Homicide Detective Cameron Gates. One wintry night, over a dozen years before, her first husband, a Pennsylvania State trooper, had been run down while working a night shift on the turnpike.

In this first installment of the Thorny Rose Mysteries, the Lovers in Crime join newlyweds Lieutenant Murphy Thornton and Jessica Faraday to sift through a web of lies and cover-ups. Together, can the detectives of the Thorny Rose uncover the truth without falling victim to a cunning killer?

Book Trailer for KILL AND RUN: 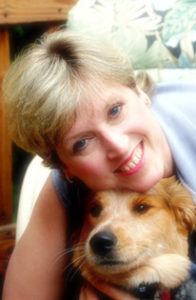 Lauren Carr is the international best-selling author of the Mac Faraday, Lovers in Crime, and Thorny Rose Mysteries—over twenty titles across three fast-paced mystery series filled with twists and turns!

Book reviewers and readers alike rave about how Lauren Carr’s seamlessly crosses genres to include mystery, suspense, romance, and humor.

March 2 – My Journey Back– review of  Kill and Run / giveaway

March 8 –  For Life After– review of Kill and Run

March 9 – fundinmental– review of A Fine Year for Murder

March 15 – Thoughts on Books– review of Kill and Run / giveaway

March 16 – fuonlyknew– review of A Fine Year for Murder / giveaway

March 24 – Books for Books– review of Kill and Run

April 6 – Dab of Darkness– review of Kill and Run / giveaway

April 11 – Turning the Pages– review of Kill and Run / giveaway

April 11 – Readers Muse– review of A Fine Year for Murder