A Piece of You, by Author D. M. Annechino, A Review

Home » All books » A Piece of You, by Author D. M. Annechino, A Review

Book Review:  A Piece of You

The man doesn’t want to hurt them. He just wants to kill them. Rather a strange M.O. for a serial killer stalking San Diego, wouldn’t you say?

Book three in the Sami Rizzo series gets off to a fast and suspenseful start in A Piece of You. Released September 7th, 2015, Detective Rizzo faces still another serial murderer, but this one isn’t as predictable. Except perhaps for one thing: He seems intent on killing members of the same family.

So the investigation begins, with Sami and her partner seeking answers. Yet the family members seem unhelpful and rather detached. If a killer is targeting a family, one of them must know why. You will be wondering how many have to die before the truth comes out. Because the person behind it is still planning, no matter what the cost.

Then Sami starts receiving little notes containing poems. Each one grows more threatening. Is she being targeted now too?

The story weaves a complicated path between the police departments, the investigation, and the marriage Sami and her husband are trying to rebuild. It would seem that in every area of her life, solutions won’t be as easy as you would wish. There are several subplots within the main plot of this one. Conflict in the marriage isn’t the only issue. Multiple police departments vie for control with reasons that may go beyond territorial. It may go deep into the justice department.

I liked the book. It was well written, with appropriate dialogue. Sami is a character we can relate to and enjoy. Married with growing children who are needing her less, a husband–also a police detective–who loves her, issues in their marriage that may or may not resolve. The average wife and mother who just happens to go after serial killers.

The story an easy one to read, light in some ways considering it contained a serial killer. While there was violence, it was neatly done. The mysteries may not have been overly complex, but the story getting there was very entertaining.

This is the first book I’ve read by Mr. Annechino, though the third in the series. You might prefer to read the books in order so you know Sami’s background in more detail, but it isn’t essential. This is a stand alone novel, though there are possibilities left open that we may see in book four. I will look forward to it if so.

We received a copy of this book as part of the virtual book tour currently underway for Mr. Annechino. The tour runs for the months of December 2015 and January 2016 and includes all three of the series. You will want to drop by to check out more reviews, interviews and articles from the author here at iRead Book Tours.

Book #3 – Book Description for A Piece of You

Homicide Detective Sami Rizzo is at it again! She never dreamed “America’s Finest City,” would be tormented by yet another serial killer, but for the third time in the last five years a depraved maniac is stalking the streets of San Diego. Based on her qualifications and prior successes dealing with multiple murders, who else would Captain Davison assign to head the investigation?

Different from Sami’s past experiences, this fanatic is like no other. His methods of killing defy everything profilers think they know about serial killers. As an intense investigation begins and bits and pieces of evidence emerge, no one can understand his motivation. He’s merciful, yet brutal. And just to make things even more confusing, all of his victims are blood-related. Is he settling a vendetta? Did he randomly pick a name out of the phone book and begin a rampage? Or is there a deeper story?

Based on very little evidence and a lot of gut instincts, Detective Rizzo pieces together a complex puzzle and narrows the field of possible suspects. She learns that the killings may connect in some way to powerful people within the judicial system and doesn’t know who to trust. Ultimately, she comes face to face with the killer for a battle of brain and brawn. Can she outwit the shrewd killer, or will she be his next victim?

Two years ago, Detective Sami Rizzo narrowly escaped a brush with death at the hands of a serial killer. After apprehending the killer and bringing him to justice, this life-changing event compels her to resign from the police force. In her heart of hearts, however, she struggles with the decision. But a second serial killer—a well- respected doctor gone astray—uses his charm to seduce his victims and then performs horrific surgical experiments on them.

In a final act of depravity, he scatters their mutilated bodies throughout San Diego County. Feeling a sense of duty and obligation, Sami Rizzo appeals to the police chief and mayor, and they reinstate her as a homicide investigator. As the body count grows and the killer’s experiments become more and more brutal, Sami follows one dead-end lead after another, while trying to deal with a sickly mother and a turbulent relationship with her lover. But then the killer makes a crucial mistake: one of his victims survives. Sami does everything to protect the barely alive victim, but the killer has a different plan.

They Never Die Quietly tells the story of Homicide Detective Sami Rizzo, who is assigned to head a task force investigating serial killings in San Diego. Simon, the highly intelligent, cunning, and deceptively charming villain, redefines the depths of human evil. He believes God has given him absolute authority to purify his unholy victims through a ritual that ends in a grisly crucifixion.

Driven by warped religious beliefs and guided by his dead mother, very much alive in his subconscious, Simon abducts “chosen ones” and holds them captive in a Room of Redemption. There, the victims helplessly await their crucifixion. Detective Rizzo urgently yearns to solve the case and gain the respect of her male colleagues, but her obsession to apprehend the killer on her own clouds her thinking. When Simon outsmarts Rizzo and captures her, determined to make her his next victim, she must employ all her resources—both physical and intellectual—to outwit the villain at his own game. 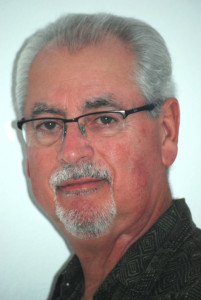 Daniel M. Annechino, a former book editor specializing in full-length fiction, wrote his first book, How to Buy the Most Car for the Least Money, in 1992 while working as a General Manager in the automobile business. But his passion had always been fiction, particularly thrillers. He spent two years researching serial killers before finally penning his gripping and memorable debut novel They Never Die Quietly.

​His second book, Resuscitation (Thomas & Mercer 2011), a follow-up to his first novel, hit #1 in Kindle sales in the UK and reached #26 in the USA. He is also the author of I Do Solemnly Swear (Thomas & Mercer 2012) and Hypocrisy. A Piece of You is his fifth novel, the third in the Detective Sami Rizzo series. A native of New York, Annechino now lives in San Diego with his wife, Jennifer. He loves to cook, enjoys a glass of vintage wine, and spends lots of leisure time on the warm beaches of Southern California.