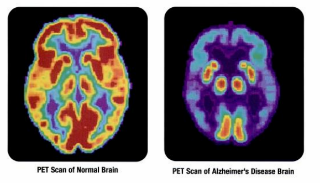 There are articles circling the web today about a possible—and incredible–treatment for Alzheimer’s Disease.

What makes it better still is that it appears to be non-invasive.  Studies on mice at the University of Queensland, have shown remarkable success.  The research was considered exploratory, so even the researchers were surprised at the results.

Using focused ultrasound technology, repeated ultrasounds ‘removed’ the amyloid plaque tangles in 75% of the treated mice!  (Another report says 56%.  Less, but still amazing).  To me, that is stunning.  The mice showed memory improvement in several different tests.

The researchers say it is still years from being tried or used on human patients.  As usual, we are warned not to get our hopes up.  There are still many parts to the test:  Will it be long lasting?  Will there be side effects?  Will there be any resultant harm?  It will take time to see what long lasting effects it has on the mice.  They also need to study how and why the ultra sound works. Does it enable another function that accomplishes the task.  Lastly they warn that many things tried on mice don’t succeed past that stage.

Then the next step will be sheep.  Apparently one of the concerns is the ability of the ultrasound to be as effective through thicker skulls and larger brains.

Nevertheless, ultra sounds with stronger abilities are being developed for treating various diseases that might overcome that particular issue.

Even if they must go through many more years of testing, doesn’t it seem likely there might be less side effects since it IS non-invasive?  The fact that no medicine is used that can cause harm to other parts and organs of the body means that it could be less likely for there to be side effects.  Plus, even if the plaque should grow back, the treatment might buy additional years for the Alzheimer’s victim.

Add to the improved lifestyle of the person, you would have a substantial cost savings.  Since the numbers are expected to increase so substantially over the next decade, and the expense soar, a treatment such as this could easily save billions.

I know there are definite rules in place for testing, but if it were me and I showed signs of Alzheimer’s, I would agree treated as a test subject.  Knowing how much an Alzheimer’s patient loses, and knowing it will cause the death of the patient,  I imagine many would be willing to see if it might help, whether it stopped or delayed onset of the disease.

Reading about it is exciting to me.  We know there is a wide variety of research underway now.  This is the first I’ve heard that treats without medication or invasive treatment.

Plus it is working on removal of the plaque, not the process of Alzheimer’s.  Those studies are urgently important as well, of course.  Many of the studies entail finding the DNA, the molecule involved.  In very general terms, the starting goal is to isolate it so studies can find a way to treat it.   I’ve read of many studies that may help predict or identify that a person has Alzheimer’s.   This may be the first that shows success at actually getting rid of it.  That is so encouraging.

For all their cautious warnings, I find this one of the most interesting and hopeful studies to date.  It also makes me wonder how excited the researchers must be.  For all the repetitive activity, the waiting, the false starts, it must be a thrill for everyone involved to see such positive results. It is definitely one I will be following.

You can find more information here on Alzheimer’ HQ.