The book is a collection of stories from nineteen different authors who were in attendance this year at the tenth conference known as Killer Nashville Noir. The selections include shorts from popular and established authors like Anne Perry and Jeffrey Deaver as well as stories from new and upcoming writers.

This mystery takes us to  London between the two world wars.   It may be short but Ms. Perry gives the reader much to consider in the brief pages.

An idealistic photographer who would insist on peace at all costs, falling in love with a man who feels the same. Her view when seen from our side of the century, seems upside down.  Yet if we’d seen the death, the injuries, the grief, the entire country faced for years after, perhaps we would feel the same.

In a way the story mirrors our society and our nation today. Ms. Perry has a knack for that. Is it that we are unwilling to learn from the past or perhaps that we don’t believe we could be misled? In so many ways we seem to repeat the mistakes we’ve already made.  Some want peace at any cost. Some believe peace must be sacrificed for a greater good. Both feel strongly today, just as many did then.

Perhaps a more important question: Can you demand peace for a nation if you don’t hold it true in your own life?

A short story is just that. I wish it had been longer, though perhaps it will serve as an introduction to a coming book. Its one I’d want to read. Ms. Perry pulls you back in time, to a different world that we know today. Yet at the same time she makes us comfortable there.

You will enjoy reading Shutter Speed. Many of you already enjoy the authors long list of bestselling books, but if not it will give you a reason to add her to your “must read” list.

In that  short space of time,  many issues are brought to mind, issues that span the past and the present.  The main one is how often we want so badly to believe in one thing that we may not see the something worse that results.  While peace is always a preferred goal, it surely matters how you get there. I was so curious to know how they would feel in hindsight.

There is a lot to consider within a brief number of pages.  That in itself is an accomplishment. When a writer has hundreds of pages to develop a topic, raise questions, and perhaps find resolution, it is more expected. But when you can provoke that in a chapter’s length, it is very impressive.

Anne Perry has a vast number of books for your reading pleasure.  Her long running series are historical fiction, or historical detective mysteries, many of which are best sellers.

The William Monk series set in the 1850’s and 60’s Victorian era has twenty-one books in the series. Her Thomas Pitt series has thirty-one books.  It takes place in the 1880 and 90’s.  Besides the two series, the author has published more than thirty other novels and novellas.

The latest in the Monk series is Corridors of the Night, released September 15, 2015. In the Thomas Pitt series, The Angel Court Affair was released  in march 2015. Treachery at Lancaster Gate is scheduled to be published in March 22 2016.

If you like historical fiction you won’t want to miss these series.  If you aren’t a fan of the genre, Anne Perry just might change your mind.

We are pleased to be a part of the tour for the Killer Nashville Noir tour, sponsored by Partners In Crime Virtual Book Tours.  The tour runs through the month of November. If you would like to visit other stops on the tour, you can find the dates and the events on the schedule.

Be sure to check out the wonderful interview with Anne Perry here on Jaquo. 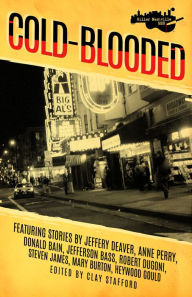 Bestselling authors Jeffery Deaver and Anne Perry join rising stars like Dana Chamblee Carpenter and Paul Gail Benson in a collection that proves Music City is a deadly place to be when your song gets called. Featuring stories by: Donald Bain, Robert Dugoni, Jefferson Bass, Mary Burton, Jonathan Stone, Steven James, Maggie Toussaint, Clay Stafford, Heywood Gould, Jaden Terrell, and more… Every year, some of the biggest names in the thriller world converge in Tennessee for the Killer Nashville conference, an event where stars of the genre rub elbows with their most devoted fans, where the bestsellers of tomorrow pick up tricks of the trade, and where some of the best writers of today swap dark tales of good deals gone bad, rights made wrong, and murder in all shades… This collection of new stories features some of the biggest names in suspense, from bestsellers to ferociously talented newcomers. Grouped around the classic theme of murder, KILLER NASHVILLE NOIR: COLD-BLOODED is a first-class collection and a must-have for fans of the genre.

“Shutter Speed” by ANNE PERRY The world-famed author Anne Perry – creator of the detective characters Thomas & Charlotte Pitt, William Monk, and Hester Latterly – historically examines another time and crime of passion. Eighteen years after World War I, Londoner and fashion photographer Jenny McAllister seeks only peace. William Churchill is at odds with Hitler. Within this time of heated escalation and world dominance, Jenny comes upon a street fight with a fatal ending in which one of her pacifist friends is killed. The murderer is unknown. The clue is hidden, but visible, if only Jenny can expose it. Anne Perry is an international bestselling author. The Times selected her as one of the 20th Century’s “100 Masters of Crime” and her books appear regularly on the New York Times bestseller list. Anne writes two series of Victorian crime novels, one featuring Thomas Pitt, a Commander in the British security forces, and his wife Charlotte Pitt. The other features William Monk, who’s in the River Police, and wife Hester, who’s a nurse. Anne’s other novels include a five-book series set during the First World War, her French Revolution novel The One Thing More, and Sheen on the Silk, set in the dangerous and exotic city of Byzantium. Connect with Anne: