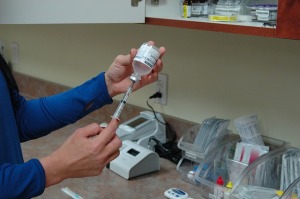 It was a huge surprise to me when I read that the flu shot given this year was only 23% effective.  Less than a quarter of those included in the study avoided the flu.   After asking myself why we should bother, I decided to check into it further.

When I did I  learned that normally it has about fifty percent effectiveness.  I had the impression it worked far better than that.  Did you?

The statistics must be very difficult to determine accurately.  How many would have gotten the flu to begin with can vary dramatically year to year.  The number who got the flu in spite of getting a shot would be much easier to pin down.

Before thinking there is no point in it, in past years, flu shots have reduced hospitalization in various groups by over seventy percent.  Those are the impressive numbers we like to see if we are getting a shot.  That included admittances in pediatric departments and people over fifty, both of which are usually our primary concerns.

Plus even when the percentage hospitalized is much improved, the overall effectiveness may still seem very low.  In other words, even when the CDC reports a low rate of effectiveness, the flu shot may have still vastly lowered the number of cases requiring hospitalization. That’s a good thing.

Do you get flu shots each year?

This was the first year I’ve gotten a flu shot.  In years past I didn’t feel it was necessary for my age.  I’m not sure what decided it this year, though since I am around seniors with Alzheimer’s as often as I am, it felt like a good precaution to take.  I did not get the flu either.  Whether that is because of the shot or less exposure is unknown.

It is always recommended for seniors and for the very young.  Those with heart or lung issues, such as COPD or compromised immune systems, are especially encouraged to get the vaccine.  The effect of the flu on those can be so much worse than for a usually healthy person.  Not only is it harder to fight off, but it can also take them longer to recover from any illness.

Most—if not all–of the residents in Mom’s care facility get a flu shot annually.  This year, so far, if anyone got the flu at Mom’s residence, it must have been fairly minor.  Once one person gets it, usually many others have been exposed too, so it might make the rounds.  Not so much this year.  It has done exactly that in the past.

What happened this year?

As seems to happen each year the flu bug is able to mutate and usually does.  The changing virus is called a ‘drift variant.’   So just when there is a treatment that should help prevent it, another form often develops. Every year the versions that appear vary.  Most vaccines will protect against several different strains but not all.

During the five week period ending February 7, 2015, there had been 80 pediatric deaths resulting from the flu.  Still, this year people over the age of 65 were most often hospitalized.  Children under four were the next highest affected.

So should we still get a shot each year?

The CDC still recommends it, and hopes you will.  While there were new strains this year, it did appear effective against many existing varieties.  The vaccine also reduces complications and may lessen the length of any flu virus.

Personally, I’m convinced.  In my opinion the protection it may provide makes it worthwhile.  It’s an easy vaccine to get. If it protects from most of the flu varieties, that is good.  If it helps prevent me from passing the illness along, that is even better.

There is news out about a new class of antibodies that is being developed and tested.  If it works as they hope, it  could protect against any and all forms of the flu virus with one dose.  That would certainly put any question to rest.  Imagine if it could be eliminated as diseases such as small pox have been.  Though several years out still, it will be interesting to see how it tests.