“Come out of your rooms, even if you find it an effort, pull down your individual barriers, let yourselves be caught up by the ideas of working people and help them in the struggle against a corrupt society.” George Grosz

In 1912 a rebellious young artist from north eastern Germany moved to the Wedding district of northern Berlin. George Grosz was already proving a distinctive draftsman, influenced by the expressionist group Die Brücke (who he had met while training in at the Dresden Academy of Fine art) but was also caught up in the ‘shock sensations of modern life’ . 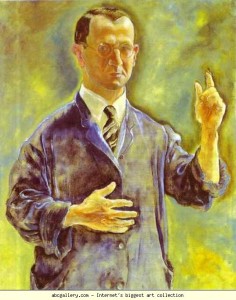 Berlin in those days seemed fired up by the idea of the modern metropolis as an ever moving, ever changing experience. Newspapers ran articles dealing with the “noise in the city” and the “nerves of the metropolitan”. Restless traffic signals. Dramatic lighted billboards. Trams and trains rattle and hum.

An epic science-fiction drama film directed by Fritz Lang – Metropolis – was just one expression of this feeling. Another was the work of George Grosz.  His fiery red paintings, such as A Funeral: Tribute to Oskar Panizza, presents the city as a futurist hell worthy of Bosch or Bruegel. A dense, collage-like multi-layered technique, drawing from Cubism and Futurism, builds a claustrophobic highly charged atmosphere.

A chaotic procession of distorted figures represented in heavy shades of dark red and black, portrays a hellish world between precariously angled buildings. 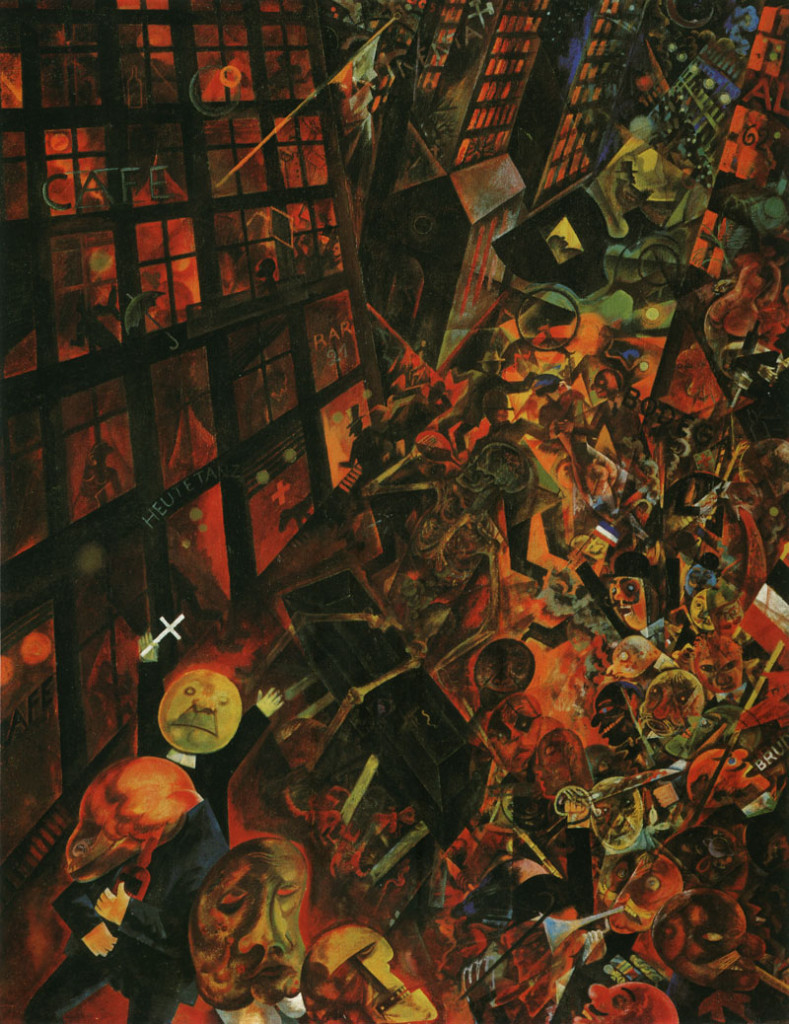 Funeral is a strong statement of Grosz’s feelings of his anger and distrust of German society during the  aftermath of  World War I. He felt that in showing crime and violence in an exaggerated manner, art might actually have a restraining effect on reality. His painting ‘Funeral Procession’ he described as a ‘picture of hell’, a ‘Gin Lane of grotesque dead men and madmen’, a ‘swarm of possessed human beasts’, expressing his conviction that ‘this era is sailing downhill on to destruction’. 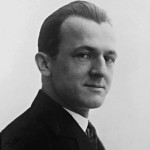 Art historians like to portray Grosz as a misanthropic loner, who felt surrounded by ‘stupid, ugly, brutal people’ however contemporaries describe him as almost child-like, with a love of circus clowns and Volkstümliche Musik. He was certainly a snappy dresser – Weiland Herzfeld described him thus: “His ash-blond hair was faultlessly cut, carefully brushed, and the part was as sharp as the crease in his trousers…His reddish face, his bold profile, and his blue, mistrustful eyes could have been those of a German officer, had not a trace of doubt and shyness made them appear too sensitive…”

Grosz’s panoramas of moral decay, and his satirical drawings of the Berlin ruling class made him a controversial artist. In 1920 he was arrested and fined $5000 reichmarks for attacking the army in one of his portfolios. Three years later he was back in the dock; the charges were defaming public morals.

In Grosz’s Germany, everything and everybody is for sale. All human transactions, except for the class solidarity of the workers, are poisoned. The world is owned by four breeds of pig: the capitalist, the officer, the priest and the hooker, whose other form is the sociable wife. He was one of the hanging judges of art. –Robert Hughes

Grosz was considered a Dadaist and leading light of the New Objectivity (in German: Neue Sachlichkeit), a realist, anti-romantic attitude in Weimar Germany that applied to art, literature, music, and architecture equally. He himself, though, considered himself a propagandist for the social revolution – much more an anarchist than the left wing communist he’s often painted, and he found himself quickly out of step with the rising power of Adolf Hitler and the National Socialists.

Deutsche Kunst und Dekoration described Grosz as one-sided and pathological, “too obstinate, too fanatical, too hostile”.  After a brown-shirted assistant warned him to be careful a threatening note calling him a Jew was found by his easel. He left for a New York teaching post, and not a moment too soon. 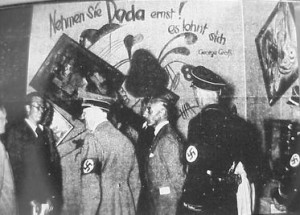 Adolf Hitler and Adolf Ziegler visit the Degenerate Art Exhibition, 1937. The wall behind them calls attention to the works of the Dada artists with depreciatory comments.

Grosz commented that when Hitler rose to power, “I felt like a boxer who had lost, all that had been done had been done in vain”.

While in exile in the USA George Grosz was amongst the defamed artists who had described officially as degenerate, and included in exhibitions in Mannheim and Stuttgart in 1933. Grosz wrote that he was secretly pleased and proud of this turn of events, because his inclusion in these exhibitions substantiated the fact that his art had a purpose, that it was true.

A total of 285 of Grosz’s works were collected from German institutions. Five paintings, four watercolors and thirteen graphic works were included in the ‘Entartete Kunst’ exhibit in Munich, 1937. The day before the exhibition started, Hitler delivered a speech declaring “merciless war” on cultural disintegration, attacking “chatterboxes, dilettantes and art swindlers”.

In November 2014 an extraordinary story broke in the German newspapers. Artworks had been seized in a tax evasion investigation in February 2012 from the apartment of an elderly recluse named Cornilius Gurlitt. It emerged that the man was hoarding a collection assembled by his father, Hildebrand Gurlitt, one of four dealers allowed under the Nazis to buy and sell the modern, or “degenerate,” art confiscated by the government. 1,280 paintings and drawings — by Chagall, Picasso, Matisse, Otto Dix, Max Beckmann and others —  had been confiscated.

A very large number of works turned out to be German Expressionist and Neue Sachlichkeit (New Objectivity) painters, considered “degenerate” by the Third Reich – over thirty works of George Grosz were amongst the find. As it is unlikely that they were purchased individually, the collection is still under wraps, but the prospect remains that a whole new showing of the infamous ‘Degenerate Art’ exhibit could emerge.

Recommended Reading :  ‘You nourish yourself with everything you hate’ George Grosz By Mario Vargas Llosa 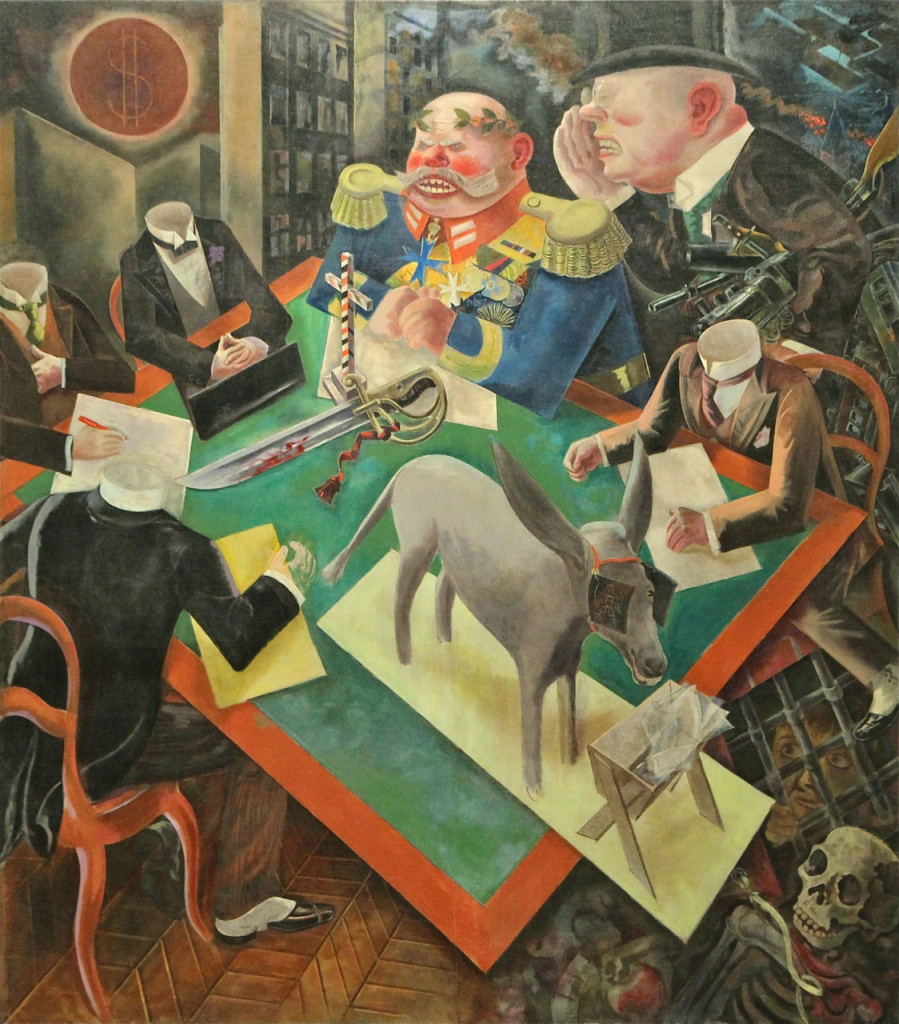 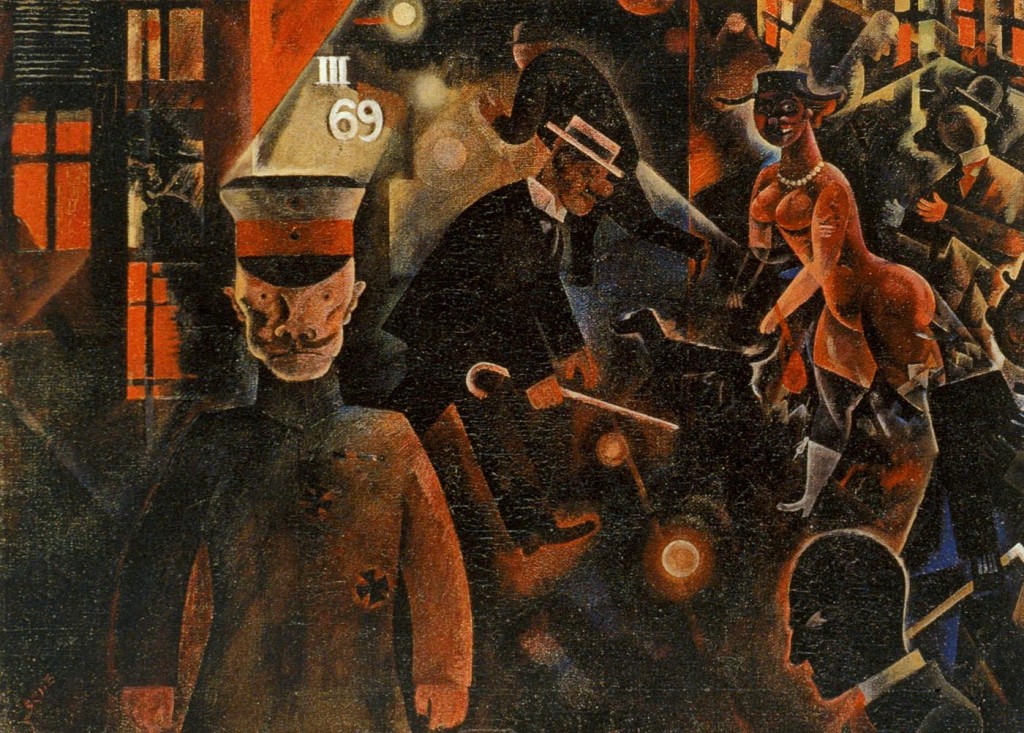 “The Engineer Heartfield” currently hangs in the Museum of Modern Art in New York. 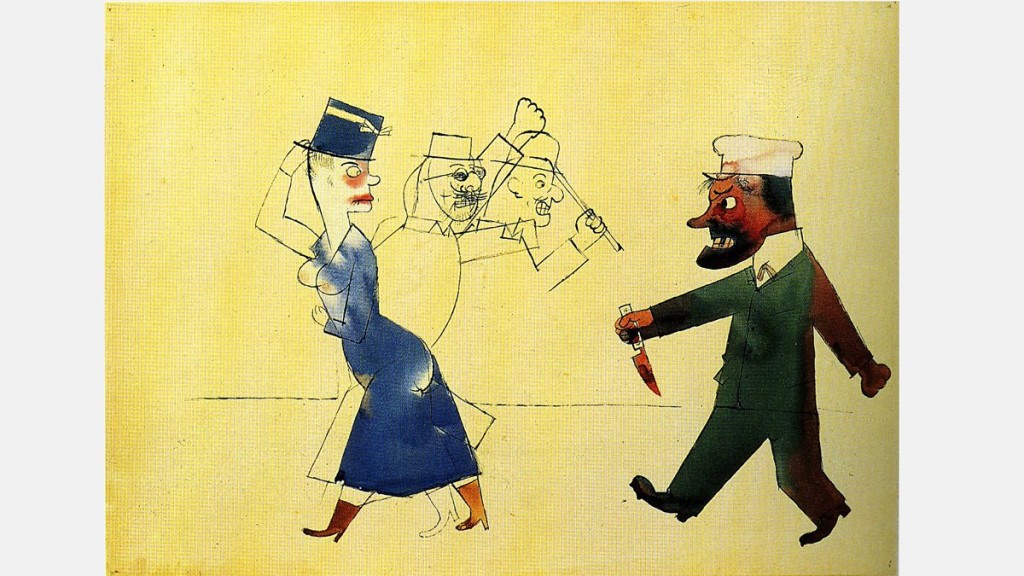