Man Mailed Himself from England to Australia

Home » All society » Man Mailed Himself from England to Australia

Man mailed himself from England to Australia. 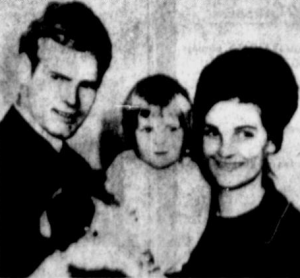 In 1964, Australian athlete, Reg Spiers, was stuck in the UK. He desperately wanted to get home to Australia but couldn’t afford the fare. So his solution was to have himself mailed home as freight.

The system allowed freight to be sent cash-on-delivery, so no up-front payment was required. Reg reckoned that he’d find a way to pay for his flight (in a box in the cargo hold) when he got back to Australia.

Reg was twenty two. He was a javelin thrower who was aiming to compete in the next Olympics but an injury prevented him joining the Australian team. He travelled to England – working his passage aboard ship – because he had been told that if he could regain his previous fitness he might yet appear at the Tokyo Olympics. He decided to train in the UK with the British Olympic javelin team.

He hated it there.

He had left his young wife and daughter back in Australia and wanted badly to return to them but he couldn’t get work aboard an Australia-bound ship. He was stuck, broke and lonely.

Out of the Box: The Highs and Lows of a Champion Smuggler

He started working as a labourer but his wages weren’t even remotely large enough for him to save the air fare. The consulate couldn’t help him and he thought he might never see his homeland and his family again. Then he got a job in the Air France export freight department at what was then known as London Airport and an idea began to form. He decided that he would crate himself up. He’d discovered that it was the recipient who paid for air cargo once it was received – the sender paid nothing.

He discussed this with a carpenter friend – who thought that Reg was completely nuts – but he agreed to build a freight box five feet long, two and a half feet wide and three feet high. The box was fitted with leather straps so that Reg would be able to hold on if the crate received rough treatment. He equipped the crate with a torch, a little canned food, a bottle of water and an empty bottle (for when the water came out at the other end).

He was loaded onto an Air India flight bound for Perth

There was a twenty four hour delay before the plane could take off due to bad weather. The first stop was France where additional freight was loaded. At the next stop, Bombay, the crate was placed in the hot sun for four hours – upside down. But after 63 hours and over 10,000 miles his crate arrived in Perth and was manhandled into the bond shed.

Reg had prepared for this. Letting himself out of the crate, he made a hole in the bond shed wall. He donned a suit that he had brought with him in a bag and, as there was no security, simply walked from the airport and thumbed  lift to his home.

His plan had worked but he forgot just one thing

Reg had told his carpenter friend in England that he would get in touch to let him know when he was safely in Australia. In the  excitement of being reunited with his wife and daughter … he forgot. The carpenter, convinced that Reg had frozen to death in the cargo hold, or suffocated, alerted the authorities. Reg became a media sensation. And Air India handed him the bill – for £431/10s.

The airline eventually waived the fee. In fact, Reg became something of hero in Australia. People admired his pluck, spirit and forbearance. Soon, job offers began to come in. Businessmen decided that if if Reg and had the ingenuity to make his perilous journey, that he would make  good employee. Reg said he was ‘absolutely astounded’ by the way the public had received his story.

In 1981, Reg disappeared. Three years later, he turned up in Sri Lanka. His freight experiences had obviously been put to use as he was convicted for drug smuggling. He was sentenced to death but appealed successfully. Four years later, he was in court in Australia charged with importing $1.2 million worth of cannabis into the country.

What next? I recommend the book you see above – it’s  fascinating story 🙂