Gifts For Kids: The Slinky

Home » All lifestyle » Gifts For Kids: The Slinky 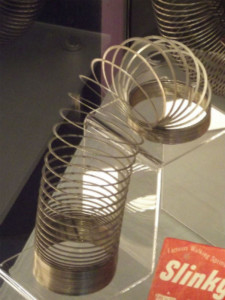 Did you have a Slinky when you were growing up?  Do you still have a Slinky?  The cool little toy is fun for children and adults.  It’s hard to part with something so fun.

Since August 30th is Slinky Day, it seemed appropriate to go back and remember…

The slinky is a toy that has graced families since the 1940’s.  While it does have new varieties in colors, plastic, and even sizes, the original silver gray slinky is still being made and sold and loved just as it was over 70 years ago.  And so it should be.   It’s a wonderful example of a toy that can offer hours of fun without the high price tag often seen for children’s toys.

I remember spending hours letting it ‘slink’ in back and forth in my hands, the sound and look of it, somehow very relaxing.  My favorite was sending the little guy down the stairs.  I could never teach it to get back up to the top, but no doubt got a lot of exercise chasing it up and down.  It was a delight to see it go on its own.   When my daughter was a few years old, we had to get one for her too.  This time even the dogs got into the fun, biting at it as they chased it down the steps.

The History of The Slinky

Yes, it actually has an interesting history.  Naval engineer, Richard T James, first invented it in 1943 in Philadelphia.  He was creating springs to stabilize instruments on ships.  If you’ve been on a boat of any kind in rough weather, you know that would be invaluable.  Instruments need cushioning or flexibility when a ship is rocking in the waves.

Anyway, in a very profitable accident, he knocked one off a shelf, where it did its slinky thing, landing on different items and recoiling, until it landed on the floor, collecting itself and standing tall.

After experimenting with various weights of wire, he found the one that still today enables the slinky to walk.  Forming a company that first made 400 units, they were demonstrated at Gimbel’s department store in Philadelphia.  All 400 slinky’s sold within ninety minutes! Thus began Slinky’s continuing popularity.

Soon after, Mr. James created a machine that could make the slinky in seconds.  Imagine being able to do that.  To create such an entertaining little toy that quickly is amazing still today.  In the first two years it was available, over 100 million slinkys were sold at $1.00 each. You can see a a sample below of the varieties available today, though the original is still the bestseller.

The slinky dog debuted in 1952, courtesy of a Washington woman who sent the James’ a letter with designs.  Clearly, they liked the idea.  It is said that Helen Malsted received five figure royalties for 17 years as a result of her letter.  The little dog is hard to resist.  a redesigned dog was presented in Toy Story.

Circumstances changed for Mr. and Mrs. James when the two divorced in 1960.  Mr. James became a Wycliffe Bible translator in Bolivia after that, while his wife continued to run the business for the next thirty eight years.  Their legacy was to keep the slinky an affordable for all, which it still is to today.  Over 300,000,000 sold, and still a toy every child would love.

The giant slinky pictured here is 70% larger than the original.  That means it is wider AND longer.  It’s a kick to see it go down the stairs!

And last but not least, the plastic slinky from Poof-Slinky.  It’s still part of the authentic Slinky line up, but in your choice of colors.

Click here to see the full selection, including multipacks for party favors, slinky juniors, and more.